Thomas of Lancaster was born in 1387 at Kenilworth Castle in Warwickshire, he was the second surviving son of King Henry IV and his first wife Mary de Bohun, daughter of Humphrey de Bohun, 7th Earl of Hereford, and Joan Fitzalan.

Thomas was made a Knight of the Bath on the founding of the Order by his father on 12 October 1399. He was nominally Lieutenant of Ireland from 1401 to 1413, and commanded the English fleet in 1405. 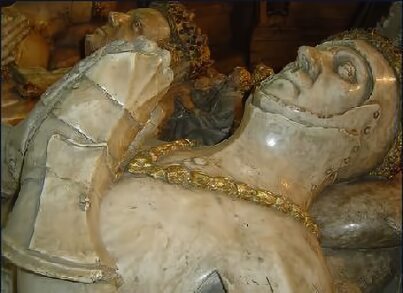 Thomas acted in opposition to his elder brother, the future King Henry V, and the Beauforts during the latter part of his father's reign. He favoured an alliance with the Orléanists and led an unsuccessful expedition into France in 1412. Thomas was created Duke of Clarence by his father King Henry IV on 9 July 1412.

In November or December of 1411 Thomas married Margaret Holland, widow of John Beaufort, 1st Earl of Somerset and daughter of Thomas Holland, 2nd Earl of Kent and Alice Fitzalan. Through their mutual descent from the FitzAlan family, Margaret was the first cousin of Thomas' mother, Mary de Bohun. The marriage did not produce any children, although Thomas was stepfather to Margaret's six Beaufort children by her first marriage. He did, however, father an illegitimate son, Sir John Clarence, who fought along with his father in France.

On the accession of his brother Henry V to the throne, Thomas served him faithfully, he helped in the planning of and fought in Henry V's wars with France. The English Army landed in France without opposition and marched to Harfleur to besiege the town. Thomas was present at the siege of Harfleur, where he played a major role but was invalided home before the battle of Agincourt was fought and in 1416 acted as regent in Henry's absence. Later returning to France, he fought at the Siege of Rouen (July 1418 - 19 January 1419), where he commanded the English forces. 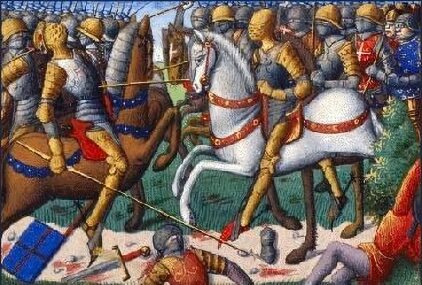 Henry V returned to England in 1421, leaving Thomas, a distinguished soldier, to remain in France as his lieutenant. French and Scottish forces combined to raid the English possessions in Normandy. On 21st March 1421, an English army numbering approximately 3,000 men was resting near the small town of Baugé, to the east of Angers, where on Easter Saturday they were engaged by a larger Franco-Scots army commanded by the Earl of Buchan and the Constable of France, the Sieur de Lafayette. When the Franco-Scots army arrived at Vieil- Baugé, the unsuspecting English forces were dispersed and unprepared, many of the archers had gone in search of forage.

Since the following day was Easter Sunday, on which battle could not be fought, the Duke of Clarence decided to launch an attack without delay. In the ensuing engagement known as the Battle of Baugé fought on 22 March 1421, Thomas launched a rash uphill charge on the combined Franco-Scottish forces.

Thomas' cavalry outdistanced his infantry, the French and Scottish forces decimated the English, John Carmichael of Douglasdale unhorsed Thomas in the melée and he was killed. There are several conflicting accounts of how the Duke met his death, according to Bower, the Scottish knight John Swinton wounded him in his face after which Alexander Buchanan killed him with his mace, he was then said to have held the dead duke's coronet on his lance in triumph. Another version records that a Highland Scot, Alexander Macausland of Lennox was responsible for Clarence's death whereas French chronicler Georges Chastellain claims the duke killed by a Frenchman. Sir Gilbert Umfraville and Lord Roos were also killed, while the Earls of Somerset and Huntingdon were captured. Later Salisbury and a contingency of archers retrieved some of the bodies of the fallen, including that of the Duke of Clarence.

Thomas' illegitimate son John Clarence accompanied his father's body from Baugé to Canterbury Cathedral, where he was buried in St. Michael's Chapel. Sir John Clarence was granted lands in Ireland by Henry V. The French Langlée family later claimed descent from him.