The Cuerdale Hoard, an enormous Viking silver treasure of some 8000 silver coins and pieces of bullion, was discovered in Lancashire, in 1840.

It is one of several Viking hoards unearthed in England but is the largest to date. It is larger than any hoard found in Scandinavia and is the largest Viking silver hoard ever found outside Russia.

The hoard was found by workmen employed in repairing the embankment on the south side of the River Ribble at Cuerdale, near Preston, where it had been buried in a lead chest. 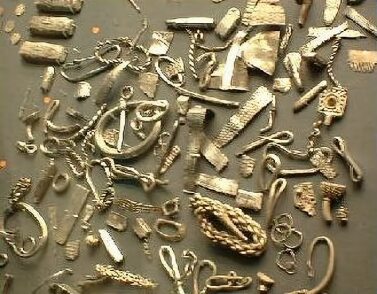 Silver formed the basis of currency in the Viking Age and it was often buried in times of unrest. The coins found in the hoard indicate that it must have been buried in the years between 905 and 910, soon after the Vikings had been expelled from Dublin in 902. The Ribble Valley was then an important Viking route between the Irish Sea and the city of York.

The coins in the hoard were obtained from three sources, the largest proportion derives from the Viking kingdoms of eastern England, the other two portions are of Alfred the Great's Wessex and coins from overseas, these include Byzantine, Scandinavian, Islamic, Papal, North Italian and Carolingian coins.

The bullion in the hoard weighed over 36kg (80lb). Some of which had been reduced to ingots of varying shapes and weights; much of the rest consists of silver jewellery, and other artefacts that had been broken up into small pieces intended to be melted. Even by modern standards, it represents astounding wealth, which has led to theories that it was perhaps a huge war chest collected by the recently expelled Vikings from Dublin intent on making a forceful return.

Curiously, a long-held local Preston-Lancashire legend, which predates the discovery of the hoard stated that anyone who stood on the south bank of the River Ribble at Walton-le-Dale and looked upriver to Ribchester would be within sight of the richest treasure in England.

The hoard was declared a treasure trove and handed to the Duchy of Lancaster, owned by the crown. It was given by the Duchy to the British Museum, where most of it remains. Around 60 items from the hoard are held by the Ashmolean Museum in Oxford and some coins minted at Quentovic in northern France are held by the Château-musée de Boulogne-sur-Mer.