The Viking Kings of York

The Great Viking Army of Ivar the Boneless, which was known to the Anglo-Saxons as myself heathen here, landed in East Anglia in the year 865, from there they marched north through Mercia to York, known to the Anglo-Saxons as Eoforwic, which was captured by the Great Viking Army in November 866 and became the capital of the Viking Kingdom of Jorvik. Jorvik became a major river port, part of the extensive Viking trading routes throughout northern Europe. 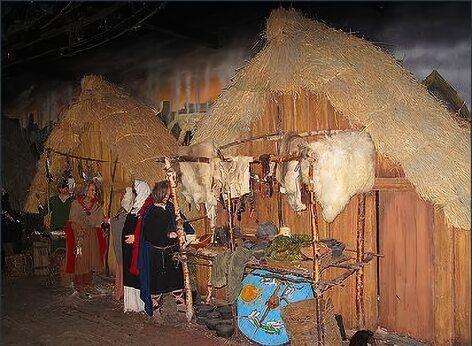 Northumbria was at the time in a state of civil war, King Aelle of Northumbria had usurped the throne from Osberht, however, they agreed to unite against their common enemy, it took four months for them to join their forces, and on 21st March 867 they stormed the city walls and gained entry to York in an attempt to relieve it. The Vikings rallied, slaughtered all those who had entered the city and routed those who were outside. Thereafter, until the mid-tenth century, Jorvik was dominated by Norse warrior-kings Halfdan Ragnarsson

Ivar's brother Halfdan, son of the Viking leader Ragnar Lodbrok by Aslaug, and a commander in the Viking army became the first King of York.

The colourful Norse saga, Ragnarssona þáttr (The Tale of Ragnar's sons) featuring the semi-legendary Ragnar Lodbrok and his sons, Halfdan, Björn Ironside, Sigurd Snake-in-the-Eye, Ivar the Boneless, and Ubbe, records the Viking conquest of York. According to the saga, Ragnar was killed by Ælla, King of Northumbria and the army which seized York in 866 was led by Ragnar's sons who avenged his death by subjecting Ælla to the Viking blood eagle.

In 876 Halfdan waged war on Bernicia, the British kingdom of Strathclyde and on the Pictish kingdoms of the north. This gave security to the Viking Kingdom of York and allowed Halfdan to settle his followers in their newly conquered territories around York and further south. Halfdan was expelled from York in 877.

Guthfrith, a Christian Viking, was appointed King of York in 878. Symeon of Durham's History of the Church of Durham records that after Halfdan was driven out:-

During this time the army, and such of the inhabitants as survived, being without a king, were insecure; whereupon the blessed Cuthbert himself appeared in a vision to abbot Eadred (of the monastery at Carlisle)... addressed him in the following words:-"Go to the army of the Danes," he said, "and announce to them that you are come as my messenger; and ask where you can find a lad named Guthred, the son of Hardacnut, whom they sold to a widow. Having found him, and paid the widow the price of his liberty, let him be brought forward before the whole aforesaid army; and my will and pleasure is, that he be elected and appointed king at Oswiesdune, (Oswin's hill), and let the bracelet be placed upon his right arm.'

Guthfred ruled only for a few years until his death on 24 August 894 or 895 and was buried at York Minster. 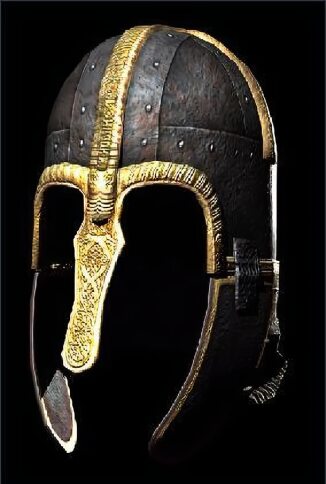 He was succeeded ruler of York in 919 by Ragnald, called a 'grandson of Ivarr' and either a brother or cousin of Guthfrith. Ragnald waged a series of campaigns against the Scots and the Irish. He gained control of the whole of northern England and finally wrested control of Bernicia from the Anglo-Saxons in 916. England was divided into two parts, the Danelaw, comprising northern and eastern England under Viking rule, and Wessex (which included the south-east and south-west) under Anglo-Saxon rule.

In 921 Ragnald acknowledged overlordship of the English King Edward the Elder.

On Ragnald's death Sigtrygg Cáoch became King of York in 926, His epithet 'caoch' meant 'One-eyed'. He attacked Mercia from the Mersey which then formed part of the border between Mercia and the Viking Kingdom of York. He also commanded Viking forces in the Battle of Confey and other battles. In the hope of retaining York as an independent kingdom, he married the sister of the English King Athelstan, possibly St. Editha. Just one year later Sitric died suddenly.

Sigtrygg was succeeded by Guthfrith from Dublin, he was driven back to Dublin and King Athelstan gained control of Jorvik. At the Battle of Brunanburh, fought in 937 and one of the bloodiest battles ever fought on British soil, Athelstan defeated a combined force of Strathclyde Celtic Britons, Scots and the Viking King Olaf Guthfrithson of Dublin. On the death of Athelstan in 939, English, Dublin Vikings and Scandinavians competed for power in Jorvik.

Eric Bloodaxe, probably one of the best-known names in Viking history, was known in Old Norse as Eiríkr blóðøx, and reigned for a short time as King of Jorvik and twice as King of Northumbria (c. 947-948 and 952-954). In 954, Eric Bloodaxe was expelled for the second and final time and King Edred of Wessex and England gained control. From then on York and Northumbria remained part of a united Anglo-Saxon kingdom.

Following the Norman conquest of 1066, the north of England was crushed when subjected to William the Conqueror's 'harrying of the north' in the winter of 1069/70. between 1070 and 1085, there were occasional unsuccessful attempts by Danish Vikings to retake the Kingdom of Jórvík.

In the late 1970s, excavations were carried out at Coppergate in York, where experts from the York Archaeological Trust found preserved Viking homes, clothes, games and goods. The remains of timber buildings were laid out along the street of Coppergate, each separated from its neighbour by fences. Archaeologists unearthed remarkable evidence of Viking cottage industry, including metalworking, jewellery making and the craft that gave Coppergate its name - the manufacture of wooden cups and bowls. Coppergate means 'street of the cup makers'.