Rollo or Rolf the Ganger

Debate remains as to where Rollo or Rolf, the first Viking ruler of Normandy, was born. He is first referred to in historical sources as a leader of the Vikings who besieged Paris in 885-6 during the reign of King Charles the Simple of France. The earliest known source to mention Rollo's origins is the tenth century chronicler Richer of Reims, who claims that Rollo was the son of Ketill, whom he refers to as the leader of subsequent Viking raids on the coast in 888. Later medieval sources claim Rollo had either Norwegian or Danish origins for Rollo. 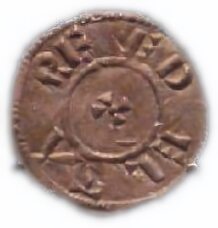 The first known biography of Rollo, Historia Normannorum, was written by the cleric Dudo of Saint-Quentin in 994, was commissioned by Rollo's grandson, Richard I of Normandy, this work which claims that Rollo was Danish. The biography relates that a king of Denmark was hostile to Rollo's family, including his father, a Danish nobleman who is not named and to Rollo's brother Gurim. He records that following the death of their father, Gurim was killed and Rollo was expelled from Denmark.

The first source to claim he had a Norwegian origin is Geoffrey Malaterra, an eleventh-century Benedictine monk. Similarly, William of Malmesbury, a twelfth-century historian stated that Rollo was Norwegian. The thirteenth-century Icelandic sagas, Heimskringla and Orkneyinga Saga identify Rollo with Hrólfr Rognvaldsson - Hrólf the Walker, so named because he "was so big that no horse could carry him". The name "Rollo" has generally been presumed to be a Latin translation from the Old Norse name Hrólfr. The Icelandic sources state that Hrólfr was born in Møre, western Norway, in the late ninth century and that his parents were the Norwegian jarl Rognvald Eysteinsson (Rognvald the Wise) and a noblewoman from Møre named Hildr Hrólfsdóttir...

Rollo had been based by the estuary of the River Seine close to Rouen in France for about a decade and launched a failed raid on Paris. Later in that year, he besieged Chartres, this attempt, again, ended in failure. Rollo took Rouen in 876, he took Bayeux by force and carried off with him the beautiful Poppa, a daughter of Berenger, Count of Rennes, he then married her and she became the mother of his heir, William Longsword. There are few contemporary mentions of Rollo. The earliest record dates from 918, in a charter of Charles III to an abbey, which referred to an earlier grant to "the Normans of the Seine", namely "Rollo and his associates" for "the protection of the kingdom." This pact took place in 911 at Saint-Clair-sur-Epte. In return for formal recognition of the lands he possessed, Rollo agreed to be baptised a Christian and assist the king in the defence of the realm. Rollo took the baptismal name, Robert. A marriage was arranged between Rollo and Gisla, the daughter of King Charles.

After pledging his fealty to Charles III as part of the Treaty of Saint-Clair-Sur-Epte, Rollo divided the lands between the rivers Epte and Risle among his chieftains and settled with a de facto capital in Rouen. Charles was overthrown by a revolt in 923, and his successor, Robert of Neustria, was killed by the Vikings in 923. His successor, Ralph, conceded Bessin and Maine to Rollo shortly afterwards.

Rollo died sometime between 928, and 933. He was succeeded by his eldest son William Longsword. Through him, Rollo became the great-great-great-grandfather of William the Conqueror.