Prince Andrew, the second son of Queen Elizabeth II and Philip, Duke of Edinburgh, was born in the Belgian Suite at Buckingham Palace on 19th February 1960. He was christened in the Palace Music Room at Buckingham Palace by Dr Geoffrey Fisher, Archbishop of Canterbury and given the names Andrew Albert Christian Edward. Andrew was the name of Prince Philip's father and Albert the name of the Queen's, who chose to reign as George VI, another of his Christian names. 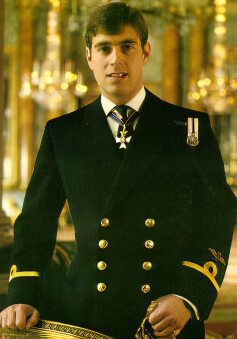 Following the pattern established with the Queen's older children, Andrew's education began at home but continued at Heatherdown Preparatory School, near Ascot, Berkshire. In September 1973, he followed in the footsteps of his father and his brother, Charles, when he attended spartan Gordonstoun School in Scotland, which he left in July 1979, acquiring four A levels in English, History, Political Science and Economics. In contrast to his elder brother, Charles, Andrew was reported to have enjoyed his time at Gordonstoun.

On leaving school Andrew joined the Royal Navy in November, 1979. He embarked on a training course as a helicopter pilot in May, 1980 and served in the Falklands War against Argentina aboard HMS Invincible. In February, 1992 he was promoted to Lieutenant Commander of the ship HMS Cottesmore

is youth he gained the reputation of a playboy prince and after his service in the Falklands War became the subject of adverse comment in the press for going on holiday with his current girlfriend, the American actress Koo Stark, who had previously appeared in a pornographic magazine.

The wedding of Prince Andrew and Sarah Ferguson 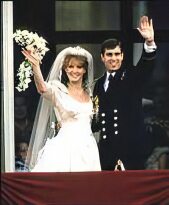 Through his sister-in-law, Princess Diana, Andrew became romantically attached to her friend, the flame-haired Miss Sarah Ferguson, the daughter of Major Ronald Ivor Ferguson, Prince Charles' Polo Manager and his first wife, Susan Mary Wright. The couple married on 23 July 1986 at Westminster Abbey. On his marriage the Queen created Andrew Duke of York, the traditional title of the monarch's second son, he also bears the titles Earl of Inverness and Baron Killyleagh.

Their union produced two daughters, the elder Princess Beatrice of York, was born on 8 August 1988, at the Portland Hospital, London and was christened Beatrice Elizabeth Mary Mountbatten-Windsor at the Chapel Royal at St. James Palace. The York's younger daughter Princess Eugenie, was born on 23 March 1990 also at the Portland Hospital and was christened with the names Eugenie Victoria Helena Mountbatten-Windsor at the Church of St. Mary Magdalene, Sandringham, by the Bishop of Norwich and became the first member of the royal family to have a public christening.

The extrovert Sarah Ferguson was hailed as a breath of fresh air when she first joined the royal family, and the couple carried out several highly successful royal tours abroad, representing the Queen. However, rifts soon began to appear in the marriage, which remained very much in the harsh media spotlight. The Duchess of York came under frequent hurtful criticism from the press for her dress sense and weight.

Andrew's naval career meant that he was frequently away from home and the high spirited Duchess of York conducted affairs with American admirers, the Texan Steve Wyatt and John Bryan, which later became public knowledge. When compromising photographs of the Duchess and her 'financial advisor', John Bryan appeared in national newspapers, the Duchess was at Balmoral where she was spending the traditional summer holiday with the rest of the royal family. She left abruptly under a cloud of scandal and media furore.

The couple divorced in May 1996. It was a civilized divorce and they shared custody of their two daughters and continue to spend joint family holidays together with them. Prince Andrew remains close to both of his daughters.

In January 1999, Andrew took up an appointment in the diplomacy section of the naval staff and finally left the navy in July 2001. He has since taken up the role of the UK's Special Representative for International Trade and Investment. Andrew is a keen golfer and is a patron of the Golf Foundation.