The Battle of Crécy

The Battle of Crécy, fought on 26th August 1346 by the armies of King Edward III of England and King Philip VI of France was a resounding victory for the English longbowmen. Following a long, three hundred-mile march from Cherbourg, with skirmishing along the route, the English the invading army arrived at the Forest of Crécy, to face an overwhelmingly larger French and the Genoese army. After resting overnight, the English occupied the high ground between the towns of Crécy and Wadicourt. The king himself occupied a windmill on a small hill that protected the rear, where he could direct the course of the battle.

The Battle of Crécy 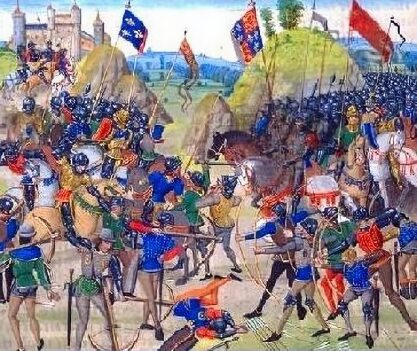 King Edward ordered his army to fight on foot and distributed his army in three divisions, stationed between the villages of Creçy and Wadicourt, one of the divisions were commanded by his sixteen-year-old son, Edward, the Prince of Wales, known as the Black Prince, assisted by the Earls of Oxford and Warwick and Sir John Chandos, the left division was commanded by the Earl of Northampton. The army's baggage was situated at the rear, surrounded by a wall of wagons with a single entrance.

The longbowmen were deployed in a "V-formation" along the crest of the hill. During the waiting period which followed, the English dug a system of ditches, pits and caltrops to maim and bring down the enemy cavalry.

The English force is estimated to have been between 9,000 and 12,000 including approximately 7,000 English and Welsh archers. The opposing French army has been estimated as between 30,000 and 72,000 strong with perhaps as many as 6,000 crossbowmen.

Genoese mercenaries formed the van of the French army under the command of Antonio Doria and Carlo Grimaldi. The Duke D'Alençon led a division of knights and men-at-arms; which included the blind King John of Bohemia, the King of the Romans and the King of Majorca. Rudolph, Duke of Lorraine and Louis II, Count of Blois were at the head of the third division and King Philip led the rearguard.

The French force, which was commanded by King Philip VI had had no rest and commenced battle immediately after their arrival. Philip situated his crossbowmen, under the command of Ottone Doria, in the front line, with the cavalry at the rear. The French chronicler Froissart has left an account of what followed:-

Plan of the Battle of Crécy 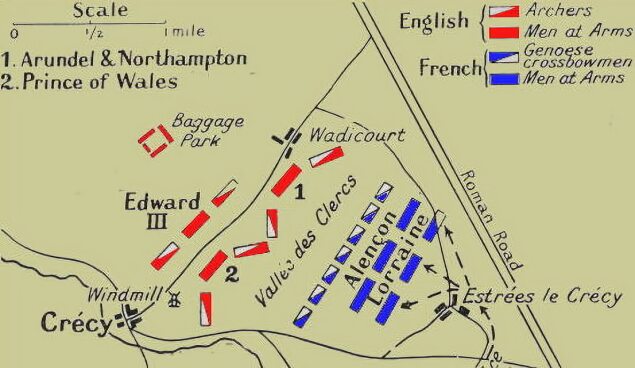 ' The English, who were drawn up in three divisions and seated on the ground, on seeing their enemies advance arose boldly and fell into their ranks...You must know that these kings, earls, barons, and lords of France did not advance in any regular order... There were about fifteen thousand Genoese crossbowmen; but they were quite fatigued, having marched on foot that day six leagues, completely armed, and with their wet crossbows. They told the constable that they were not in a fit condition to do any great things that day in battle. The Count of Alençon, hearing this, was reported to say, "This is what one gets by employing such scoundrels, who fail when there is any need for them.'

The Genoese mercenary crossbowmen attacked first, at around 4 pm, launching a series of volleys. This was strangely accompanied by the sound of musical instruments, brought by King Philip, reportedly to scare the English. Unfortunately for the French, the crossbowmen were no match for the longbowmen, who were able to fire five or six arrows in the same time as one crossbow, and also had a far longer range, a fearsome hail of English arrows is said to have turned the previously bright sky dark. The Genoese crossbows had been wet during the brief thunderstorm that had preceded the battle, and not given time to dry out, while the longbowmen had unstrung their bows until the rain ceased. The crossbowmen, who suffered heavy losses began to retreat, Doria himself was killed while trying to rally them. The infuriated French knights, upon seeing the mercenaries fleeing, hacked them down on the orders of Phillip VI as they fled back to their lines.

The French knights, following the sacred banner of the Oriflamme, charged, running over the retreating mercenaries. Many of the mercenaries cut the strings of their bows, to indicate surrender to the English. The hail of English arrows continued as the French chivalry and men-at-arms advanced, as the dead continued to fall, they blocked further waves of advance. The sixteen-year-old Black Prince forces were positioned forward of the rest of the army and took the brunt of the French attack, but Edward III, from his vantage point at the windmill, refused to send aid, asking whether his son was dead or wounded and on being reassured said "I am confident he will repel the enemy without my help." Turning to one of his courtiers the King commented "Let the boy win his spurs."

Ribaldis, an early type of cannon, without wheels, were employed in the battle, although only mentioned in one contemporary account of the battle, leading to some doubt on the matter, stone cannonballs were discovered on the battlefield in 1850 confirming their use.

John, the fifty-year-old blind King of Bohemia, riding at the Black Prince's position, was struck down with his accompanying knights, with the reins of their bridles tied together to lead the king into battle. The fighting continued far into the night. At about midnight King Philip abandoned the battlefield, retreating to the castle of La Boyes. When asked his identity by the sentry on the wall above the gate, he is said to have cried out bitterly, "Voici la fortune de la France" (Here is the destiny of France) and was admitted.

The fighting finished soon after Phillip left the field when the surviving French fled. In the morning the Welsh and Irish spearmen moved across the battlefield killing and stealing from the wounded, they spared only those who would fetch a ransom. The Black Prince adopted the emblem of the dead King of Bohemia, the three white feathers, and his motto "Ich Dien" (I serve); which has been the emblem of all subsequent Princes of Wales. English casualty figures were low, the bodies of around 1,542 French knights and squires were found in front of where the lines commanded by Prince of Wales stood, an estimate of the French men=at-arms killed numbers at least 2,000, over 2,200 heraldic coats were taken from the field of battle as war booty by the English.

The Battle of Crécy PreviousNext The Massacre of Glencoe