Although Edward of Woodstock never reigned as King of England he has gone down in history as a great medieval military leader, achieving notable victories against England's medieval rivals, the French, in the Hundred Years War. Edward, the eldest son of Edward III and Phillipa of Hainault, daughter of William, Count of Hainault, was born on 15 June 1330 at the Royal Palace of Woodstock in Oxfordshire. Edward III, on 16 September, alloted five hundred marks a year from the profits of the county of Chester for his maintenance, and in the following February, the whole of these profits were assigned to Queen Phillipa for him. He was created Prince of Wales on 12 May 1343, aged twelve, at Westminster and was also created Earl of Chester and Duke of Cornwall, making him the first English Duke. He was one of the original Knights of the Order of the Garter, an order of chivalry founded by his father. During his lifetime he was known as Edward of Woodstock; the title of Black Prince was adopted after his death and is a possible reference to his black armour.

Effigy of Edward, the Black Prince at Canterbury Cathedral 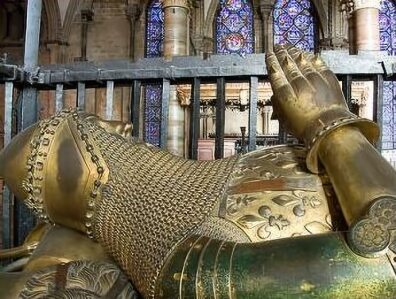 Edward exhibited military ability at an early age, covering himself in glory at the Battle of Crecy on 26th August 1346, during his father's campaign to acquire the throne of France. The prince commanded the right-wing of the English forces in the battle and played a major role in the defeat of the French at the age of but sixteen. When Edward III encountered his son after the battle, he embraced him with emotion and declared that he had acquitted himself loyally. Legend relates that the Black Prince acquired his arms of the Prince of Wales feathers from the blind King John I of Bohemia, who perished heroically in the conflict. In the aftermath of the battle, the prince happened upon the body of the dead King John, taking his helmet lined with ostrich feathers. The feathers and the dead king's motto 'Ich dien' (I serve) were adopted by Edward as his own badge, they have been used by every subsequent Prince of Wales since.

Effigy of Edward, the Black Prince at Canterbury Cathedral 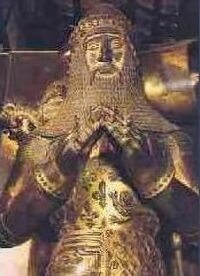 In 1355, he was appointed his father's lieutenant in Gascony and the following year led another significant victory against the French at Poitiers, taking King John of France prisoner, whom he treated with ostentatious chivalry and magnanimity. He was later made Prince of Aquitaine and Gascony.

Edward married his cousin Joan, Fair Maid of Kent in 1362 at Windsor Castle. Joan was the daughter and heiress of Edmund Plantagenet, Earl of Kent and granddaughter of Edward I and his second wife Margaret of France. She possessed a chequered marital history, being first married to Sir Thomas Holland in 1340, that same year when Holland was absent on campaign, Joan contracted a further marriage with William Montagu, Earl of Salisbury. In 1349 Holland successfully petitioned the Pope for his wife's return causing a great scandal at the time. Joan's brother died in 1352 and she became Countess of Kent in her own right. The marriage of Edward and Joan produced two children, Edward of Angouleme born in 1365, and Richard of Bordeaux, later Richard II who was born on 6 January 1367. Froissart described their household as especially magnificent. The young Edward died in 1372 at the age of six, leaving the second son, Richard of Bordeaux, as his father's heir. His parents were said to be grief-stricken and much affected.

In 1367, Edward led an expedition to Castile, in support of the deposed King Pedro of Castile, leading an army into Spain over the pass of Roncesvalles, and on the 3rd of April, 1367 won a resounding victory at the Battle of Najera in northern Castile. He then marched to Burgos, where he declared Pedro King of Castile. In gratitude for his military assistance, Pedro presented him with a huge and magnificent ruby, which is still kept in the British Crown Jewels and today adorns the Imperial State Crown. Edward remained in the kingdom of Castile for the next four months, residing mainly at Valladolid. His army suffered badly during the hot Spanish summer and Edward himself began to exhibit the first symptoms of a mortal disease, possibly dysentery.

Returning to Aquitaine, and having exhausted his financial resources with the high cost of his Castilian campaign, he made himself highly unpopular with the nobility of the province due to a levy of taxes to pay for his Spanish expedition. Resultantly, the Aquitanian nobles rose in rebellion against his rule and he responded by besieging Limoges. When the city fell to him 3,000 of its inhabitants were mercilessly massacred. A year later, Edward fell ill and returned to England on the advice of his physician.

His health fell into rapid decline and realising that he was dying, he spent much time in prayer and charitable works and asked his father to protect his young son Richard after his demise. The Black Prince died at Westminster on 8 June 1376, at he age of 45. He was buried at Canterbury Cathedral, a bronze effigy of the prince now marks the tomb.

The Black Prince's son Richard succeeded his grandfather Edward III in the following year. Joan of Kent, who later grew to be extremely obese, remained popular with the people. She died nine years after her third husband, on the 7th of August 1385, during the reign of their son and, was buried, in accordance with the terms of her will, at the Greyfriars, in Stamford, Lincolnshire, beside her first husband.

The Black Prince's Ruby, which now forms part of the crown jewels, was presented to Edward, the Black Prince by Pedro the Cruel of Castile, in reward for Edward's putting down the revolt of Pedro's illegitimate brother, Henry of Trastamara. 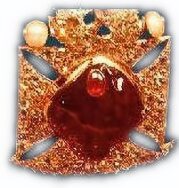 The ruby has a long and fascinating history, possibly originating from the historic ruby mines in Badakshan in present day Tajikistan, in the middle of the fourteenth century it was in the possession of Abu Sa'id, the Moorish Prince of Granada.

At that time, the rule of Castilian Spain was being centralized to Seville and the Moorish Kingdom of Granada was being systematically attacked and reverted to Spanish rule as a part of the Christian reconquest of Spain. According to historical accounts, Abu Sa'id wished to surrender to Don Pedro, but the conditions he offered were unclear. Don Pedro welcomed his coming to Seville and when the pair met, Don Pedro had Abu Sai'd's servants slain and may have personally stabbed Said to death himself. Upon searching Said's body, the ruby was found and taken by Don Pedro.

During his French campaigns, King Henry V wore a gem-encrusted helmet that included the ruby, which was worn at the Battle of Agincourt on October 25, 1415. Richard III is reported to also have worn the Black Prince's Ruby in his helmet at the Battle of Bosworth Field in 1485. James, I had the Black Prince's Ruby set into the state crown near the beginning of the seventeenth century. During the Interregnum, it was sold by Oliver Cromwell. The Black Prince's Ruby was purchased by a British jeweller who sold it back to Charles II when the monarchy was restored in 1660. It is currently set in the cross pattée above the Cullinan II Diamond in front of the Imperial State Crown.

Heraldic Achievements of the Black Prince

Arms and Armour of the Black Prince at Canterbury Cathedral 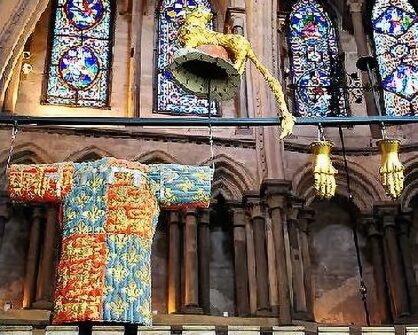 At the time of the death of the Black Prince, some of his arms and armour were hung above his tomb in Canterbury Cathedral, near to shrine of Thomas A'Beckett.

The practice of setting up arms and armour as 'achievements', carried in the funeral procession and then hung above the owner's tomb, became common from the Middle Ages. His helmet, gauntlets, quilted surcoat, shield, and scabbard are still displayed at the cathedral. Although today, replicas hang directly above the tomb, while the faded originals are kept safely behind glass.

The decayed scabbard and belt is without its sword, legend states that the original sword was taken by Oliver Cromwell, in the seventeenth century. The gauntlets are made of copper gilt and are lined with soft doeskin.

Arms and Armour of the Black Prince at Canterbury Cathedral 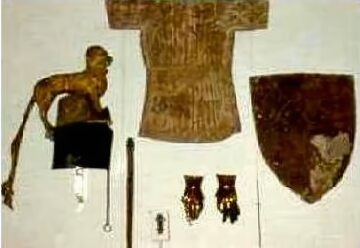 The Black Prince's shield, which is made of poplar wood, is still covered with layers of canvas, gesso, parchment, and leather. The front is decorated with the leopards of England and fleurs de Lys of France, adopted by his father, King Edward III when he lay claim to the French throne.

His surcoat, which is made of velvet, stuffed with wool and lined with satin, bears the same arms as the shield. It laces up at the front with eyelets and originally had long sleeves, although the sleeves currently reach only to the elbow.

The huge iron helmet is cylindrical with a flat top, eye holes and breathing holes. It is surmounted by a crest, which consists of a lion standing on a cap of maintenance, both made from leather. The hat is lined with red velvet.