Uther Pendragon, in Welsh, Wthyr Bendragon, the "Terrible Chief-Warrior" of early Welsh tradition was the younger son of King Constantine, whose throne had been usurped by the treacherous Vortigern. 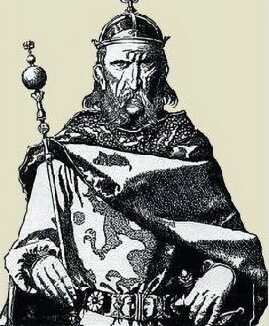 As a child Uther had been sent to the court of his uncle, King Budic I of Brittany for safety. He later returned to Britain with his elder brother, Ambrosius Aurelianus, or Emrys, eventually defeated the usurper Vortigern and Ambrosius succeeded to his father's throne.

Uther led his brother's forces into Ireland where, so the legend relates, along with Myrddin more commonly known as Merlin acquired the "Giant's Ring" (Stonehenge) as a memorial to the dead of the "Night of the Long Knives", a treacherous Saxon massacre of the Britons led by Hengist, which took place on Salisbury Plain during the reign of Vortigern.

On the death of his brother Ambrosius, Uther succeeded as high-king of Britain and is said to have held court at Pendragon Castle in remote Mallerstang Dale, in Cumbria, however, no archaeological evidence has been uncovered to confirm this claim.

According to Geoffrey of Monmouth, the author of the sometimes fanciful twelfth century 'History of the Kings of Britain', Uther acquired the epithet Pendragon when he witnessed a portentous dragon-shaped comet, which occured at the time of the death of his brother Ambrosius, and ordered the construction of two gold dragons, one of which is used as his battle standard.

Uther Pendragon was not, however, as has been claimed, a figment of Geoffrey of Monmouth's sometimes over-active imagination, and is also mentioned in Welsh literature including the tenth-century poem, 'Pa gur yv y porthaur' (What man is the gatekeeper). 'The Death-song of Uther Pen' in the Book of Taliesin, some of which may date back to the sixth century, identifies Uther as Marvnat Uthyr Pen. He also appears in several early Triads, where he is described as son of Custennin the Blessed, and the brother of Emrys (Ambrosius) Wledig and Custennin the Younger 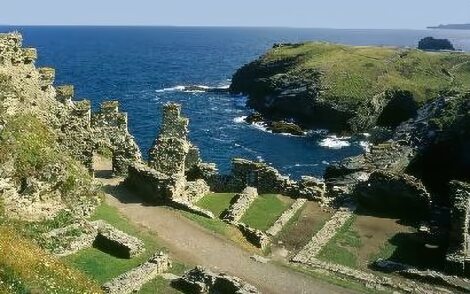 Uther continued the long drawn out struggle with the Anglo-Saxons, but at first, suffered defeat at the hands of the Angles of Bernicia. Osla, in alliance with the Jute leader Octa, defeated him at Caer-Ebrauc (York) but Uther and the Britons were victorious at the proceeding Battle of Mount Damen. Uther later travelled even further north to help the Britons of Strathclyde in their combat with the Scots.

The tale of Uther, like that of his brother Ambrosius and son Arthur, has become inextricably shrouded in legend and interwoven with folk-lore over the centuries that have passed since his demise. Uther is said to have become infatuated with Igraine or Ygerna, the beautiful wife of Gorlois of Tintagel Castle, ruler of Cornwall, after seeing her at a celebration in London following a defeat of the Saxons in battle. Ygerna was the daughter of Amlawdd Wledig, of a younger branch of the Royal House of Dumnonia. Following a quarrel with Uther, Gorlois, who had been instrumental to Uther's victory, but suspected his designs on his wife, returned to Cornwall with Ygerna. Uther, not to be thwarted, consequently launched an invasion of the province.

Determined to possess Ygerna, Uther persuaded Merlin to use his magical powers to acquire him a place in Ygerna's bed. While Gorlois was killed at St. Dimilioc during a siege on his camp, Merlin transformed Uther in his image. He is then said to have calmly entered Tintagel Castle, a Dark Age fortress in Cornwall on a spectacular promontory overlooking the Atlantic, where he and seduced Ygerna and the legendary Arthur was conceived. Uther later learned of the death of Gorlois and returned to Tintagel to seize it and Ygerna. The tale of Arthur's conception has a parallel in the story of Mongan, a seventh-century Irish king of the Dal nAraide in County Antrim, where, so the legend relates, the sea god Mannanan mac Lir transforms himself into Fiachna, the husband of Mongan's mother Caintigern.

Sir Thomas Malory in his "Le Morte D'Arthur", makes later additions to the legend, claiming that Merlin demanded the child as price for his part in the deception of Ygerna. According to Geoffrey of Monmouth, Uther later married Ygerna and she also bore him a daughter Anna, referred to as Morgan in other sources, to Uther Pendragon, Anna later became the mother of Mordred. In Robert de Boron's later Merlin, Morgan (le-Fay) is the daughter of Ygerna's first husband.

Uther engaged in a war with the Angles of the north and besieged them at Caer-Mincip (St. Albans) Although he was successful, the Angles poisoned the water supply and Uther died as a result. 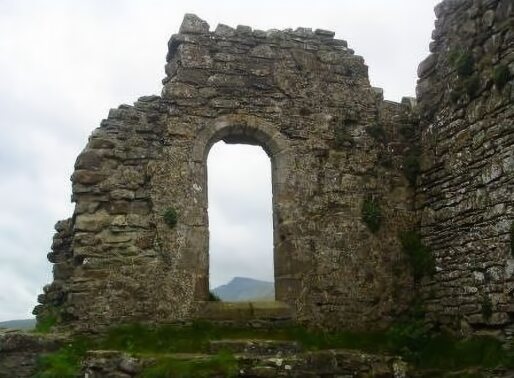 Legend records that romantic Pendragon Castle at Mallerstang was founded by Uther Pendragon,

The castle dramatically bestrides a mound near the River Eden overlooked by Wild Boar Fell to the south-west and Mallerstang Edge to the east. It was once owned by Hugh de Morville, one of the knights who became infamous for murdering Thomas A'Beckett at Canterbury Cathedral in 1170.

The present structure dates to the twelfth century and was founded by Ranulph de Meschines, during the reign of William II 'Rufus' (1087-1100), the remains of the keep are of Norman construction, although the Garderobe Turret dates from the fourteenth century

According to legend, Uther tried to re-route the River Eden to fill the deep ditch which surrounds the castle to create a moat, but failed, which is alluded to in the local rhyme:-

"Let Uther Pendragon do what he can, Eden will run where Eden ran." Another story relates that Uther Pendragon and a hundred of his men met their end at the castle when the Saxon invaders, who, unable to breach the castle's defences, poisoned the well.

There is, however, no archaeological evidence to suggest Dark Age settlement at the site, apart from the discovery of a Roman coin, the Romans established a fort along the road between their forts at Brough and Bainbridge. The castle was not called 'Pendragon' until 1309, and before that date, was known as Mallerstang Castle.