Following Julius Caesar's victory over the Belgic tribes on the Sambre in 57 BC, he appointed his ally Commius as leader of the Atrebates tribe.

Britain posed a backdoor threat to Caesar's conquest of Gaul, where he had spent eight years campaigning. Prior to his first expedition to Britain in 55 BC, Commius was dispatched by Caesar with a message to the leaders of the Celts of Britain warning them not to resist him. However, Caesar's envoy was captured and put in chains on arrival on the island. Commius, King of the Atrebates, was later returned to the Romans as part of the negotiations after Caesar landed in Britain. 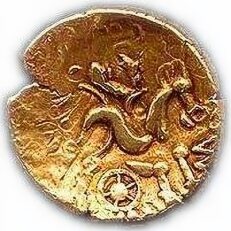 Commius accompanied Julius Caesar on his second expedition to Britain and was present at the surrender of the Celtic leader Cassivellaunus after he was besieged by Caesar at his stronghold, believed to be at Devil's Dyke, to the southeast side of Wheathampstead in Hertfordshire. Commius negotiated Cassivellaunus' surrender to the Romans. Although the expedition to Britain had proved successful it was inconclusive and Caesar returned to quell discontent in Gaul, where a poor harvest had caused much unrest.

After Caesar's return to Gaul, he subdued the Menapii tribe, in the Rhine delta and Commius was given command in the area, at the head of a cavalry force. He was granted the lands of the Morini and his kingdom was granted exemption from taxation. During the winter of 53 BC, the legate Titus Labienus, Caesar's second in command, who was left in control of Gaul while Caesar spent the winter in Italy, suspected that Commius had conspired with the Gaulish tribes against the Romans. Labienus sent a tribune, Gaius Volusenus Quadratus, to summon Commius to a meeting where it was planned to execute him in return for what was viewed as his treachery. Commius escaped from the trap with a severe head wound and vowed he would never again ally with the treacherous Romans. 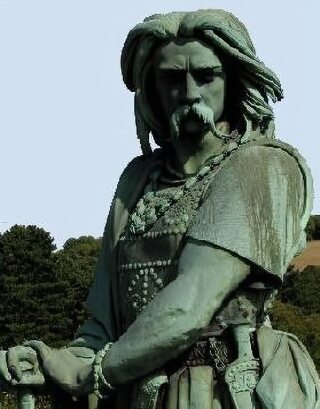 Commius next appears in 52 BC, when the Atrebates joined the revolt of Vercingetorix, chief of the Arverni tribe, who came to power in Gaul 52 BC. Commius was one of the leaders of the army that attempted to relieve Vercingetorix who was being besieged by Caesar at Alesia. Caesar built a fortification around the Alesia, a further outer fortification was constructed against the expected relief armies, the result was a doughnut-shaped fortification surrounding the city. The relief, however, arrived in insufficient numbers, estimates range from a force of 80,000 to 250,000 men. Vercingetorix, inside the city, was cut off from the relief force and the attacks initially did not meet with success. Eventually, a weak point in the fortifications was discovered and the combined forces of the rebels on the inside and the outside almost made a breakthrough. Only when Caesar personally led the last reserves into battle was he finally victorious.

Vercingetorix was taken prisoner by the Romans and executed after being publicly displayed in Caesar's triumph, probably strangled in prison. Following the fall of Alesia, Commius joined a revolt by the Belgian Bellovaci tribe led by Correus and successfully persuaded some 500 Germans to support them, but this too was defeated and Commius, having survived the ambush in which Correus met his end, sought refuge with his German allies. 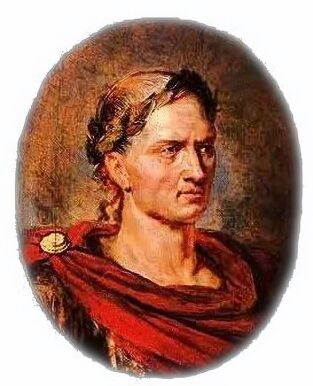 In 51 BC he conducted a guerrilla campaign against the Romans. Marcus Antonius or Mark Antony, a legionary legate at the time, ordered Volusenus to oppose him with cavalry. When the two clashed, Volusenus, although he suffered a spear-wound to the thigh, emerged victorious. Commius escaped the conflict and convinced that further resistance was futile, sued for peace, he offered hostages for his good faith and promised to no longer oppose Caesar, on the condition that he never again had to meet a Roman. Antony accepted his petition, bringing an end to the last serious resistance to Roman rule in Gaul. Pursued by Caesar, Commius fled to Britain, however, when he reached the English Channel the tide was out, leaving his ships stranded on the flats. Commius ordered the sails raised anyway. Caesar, following from a distance, was deceived into assuming the ships were afloat and abandoned the pursuit.

Commius had established himself as king of the Atrebates in Britain by around 30 BC, the Atrebates occupied the territory to the south of the River Thames that included present-day Hampshire and Sussex. He issued coins depicting a stylized, triple-tailed Celtic horse, from Calleva Atrebatum (Silchester). Coins with his name continued to be issued until around 20 BC.

Tincomarus, Eppillus and Verica, are later named on their coins as sons of Commius. From about 25 BC Commius appears to have ruled in collaboration with his son Tincomarus. After his death, Tincomarus appears to have ruled the northern part of the kingdom from Calleva, while Eppillus ruled the southern part from Noviomagus (Chichester). Tincomarus was expelled by his subjects in around 8 AD and fled to Rome as a refugee and Eppillus became the sole ruler of the Atrebates. Verica succeeded him about 15 AD, Caratacus, King of the Catuvellauni tribe conquered the kingdom of the Atrebates sometime after 40 AD.