Urian, the son of Cynfarch Oer

Urien Rheged, also known as Urian, the son of Cynfarch Oer, was a late sixth-century warrior king of North Rheged, an early British kingdom of Hen Ogledd ('the Old North'), the Brythonic Celtic speaking region of what is now Northern England and southern Scotland.

One of the Welsh Triads lists Urien as one of the "Three Great Battle-leaders of Britain", he was possibly one of the earliest Christian Kings in Britain. Urien's father Cynfarch Oer was the great great grandson of Coel Hen (Old King Cole), the first recorded post-Roman military leader in the area of Hadrian's Wall.

Urien united Rheged, which had been divided between him and his brothers, Llew and Arawn, who ruled north of the Solway Firth, probably in Galwyddel (Galloway). Urien's power base was at Caer-Ligualid (Carlisle), though he also had a palace at Llwyfenydd on the River Lyvennet, to the south of Penrith. He had another palace possibly at Caer-Brogwm (Brougham), which is next to King Arthur's Round Table and Mayburgh Henge at Eamont Bridge.

Urien's victories at the battles of Gwen Ystrad and Alt Clut Ford are celebrated in the poems of the Celtic bard Taliesin, preserved in the Book of Taliesin, a medieval Welsh manuscript containing 56 poems, of which eight of which are in praise of Urien.

He fought against the Angle rulers of Bernicia, (roughly equivalent to modern Northumbria). At the Battle of Gwen Ystrad, Urien led the "men of Catraeth" (Catterick, North Yorkshire), against a host of invaders at Llech Gwen in Gwen Ystrad (Gwen valley). Ferocious and prolonged fighting is said to have taken place from dawn at the entrance to a ford.

The Battle of Alclud Ford was fought circa 580 in Ystradclud, (the kingdom of Strathclyde), at an unknown ford near Alt Clut, the former Celtic name for Dumbarton Rock in Scotland.

Replica, a dress of a Celtic warrior

The Battle of the Cells of Berwyn was fought near the headwaters of the River Tees at (Bremenium) High Rochester, Northumberland, during the course of which, Ulph, probably one of the sons of King Ida of Bernicia, was killed by Urien. Ulf has been tentatively identified as Theodulf of Bernica.

Around the middle of the sixth century, Ida, an Anglian lord, had occupied the Island of Lindisfarne, then known as Ynys Metcaut and began to launch raids on the mainland. Urien allied with Rhydderch Hael "the Generous" of Strathclyde, Gwallog mab Llaenog and Morgant Bwlch and defeated the Angles. Urien besieged the Anglo-Saxons on Lindisfarne while his Irish allies, led by King Fiachna of Ulster, forced the Saxons from Din-Guardi (Bamburgh).

Urien was assassinated at Aber Lleu (Ross Low) on the behest of Morgant Bwlch, who was jealous of the power he wielded in the north and his reputation as a great warrior. His assassin, a foreigner by the name of Llofan Llaf Difo, cut-off Urien's head. He was said to have been buried beneath a cairn, under a bluestone cover. Nennius recorded:-

'Four kings fought against them, Urien and Rhydderch Hen and Gwallawg and Morcant. Theodoric fought vigorously against Urien and his sons. During that time, the Cymry were victorious and Urien blockaded them for three days and three nights on the island of Metcaud (Lindisfarne). But during this campaign, Urien was assassinated by the instigation of Morcant, from jealousy, because his military skill and generalship surpassed that of all other kings.' 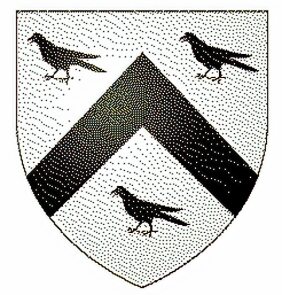 In the Middle Ages, a shield depicting black ravens was attributed to Urien, however, a black raven on a white background is recorded in historical accounts of Urien and there are numerous mentions of Ravens in battle accounts. Urien had five sons, Owain, Rhiwallon, Rhun, Elfin and Pasgen, the eldest Owain of Rheged succeeded him as king of north Rheged. One of his grandsons was St. Kentigern, the founder of Glasgow, otherwise known as St. Mungo, the son of Owain mab Urien and Teneu who was the daughter of the Brythonic Celtic king, Lleuddun.

Urien remained a popular figure in Wales over the centuries, Taliesin's poetry struck a patriotic note with the Welsh in the ninth century and he and his son Owain became incorporated into the Arthurian legends as they spread from Britain to continental Europe. His kingdom was eventually transferred to the mythical land of Gore, and Kings Lot of Lothian and Augustus of Scotland are sometimes reported to be his brothers.

During the reign of Uther Pendragon Urien is said to have married Arthur's sister Morgan le Fay. Urien initially opposes Arthur's accession to the throne after Uther's death, and along with others, rebels against King Arthur, but upon their defeat, the rebels become Arthur's allies and vassals. In the legends, his marriage to Morgan le Fayis not portrayed as a happy one, however, as in one story Morgan plots to take the sword Excalibur, kill Urien and Arthur, and place herself and her lover Accolon on the throne. Although he is always said to be the father of Ywain (Owain), many texts give him a second son, Ywain the Bastard, fathered on his seneschal's wife.