Owain mab Urien, the son of Urien Rheged, was a late sixth-century king of North Rheged, an early British kingdom of Hen Ogledd ('the Old North'), the Brythonic Celtic speaking region of what is now Northern England and southern Scotland.

Owain was said to be a giant of a man, he fought with his father against the Angles of Bernicia, (roughly equivalent to modern Northumbria). The main source on the historical Owain is the poems of the Celtic bard Taliesin, who informs us that Owain fought at the Battle of Alclud Ford which was fought circa 580 in Ystradclud, the Celtic kingdom of Strathclyde. 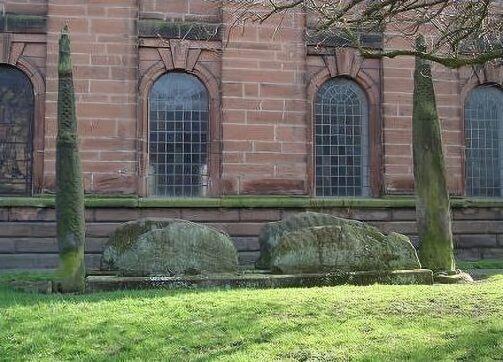 Taliesin's poem Gweith Argoed Llwyfain (The Battle of Argoed Llwyfain), provides an account of Owain's part in a battle between the men of Rheged under Urien and the men of Bernicia under "Fflamddwyn" (Firestealer), who was possibly the Anglian king Theodric of Bernica. When Fflamddwyn demanded hostages, Owain is reported to have shouted his defiance and inspired the men of Rheged to fight rather than give tribute to the Angles. Taliesin also composed Marwnad Owain, an elegy to Owain. In the poem, he states that Owain slew Fflamddwyn:-

When Owain slew Fflamddwyn it was no more to him than to sleep The wide host of Lloegr (England) sleeps with the light in their eyes And those that did not flee were braver than was needed Owain punished them harshly like a pack of wolves chasing sheep After the assasination of his father Urien, Owain succeeded to the kingdom of Rheged. He was attacked by his Celtic neighbours Dunaut Bwr from Dunoting and Gwallawc Marchawc Trin of Elmet, who led an assault on Owain's brother Elffin, while Owein and his brother Pasgen fought Dunaut.

Owain's reign proved to be a short one, he was killed in battle against his father's old enemy Morcant Bulc of Bryneich. Taliesin wrote Marwnat Owain ap Uryen (The Eulogy of Owain ap Urien) in his memory. 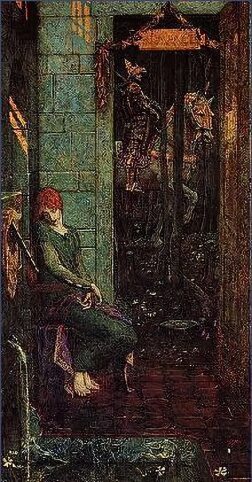 Owain is said to have been buried at Llan-Forfael or Llan-Heledd, which local traditions place in the churchyard of St. Andrew's at Penrith, though the grave may be that of the later Owen Cesarius. The death of Owain marked the end of Rheged as an effective power.

The character of Owain was later woven into Arthurian legend, which spread from Britain to continental Europe. Chrétien's Yvain, the Knight of the Lion and the related Mabinogion story Owain, or the Lady of the Fountain is devoted to his adventures, and he appears prominently in the Mabinogion tale The Dream of Rhonabwy.

He is portrayed as a knight in the later romances, the Lancelot-Grail Cycle and Sir Thomas Malory's Le Morte d'Arthur, under one spelling of his name or another. In The Dream of Rhonabwy, as Arthur and Owein play several games of gwyddbwyll (an ancient form of chess) while Arthur's men and Owein's ravens, as his followers were called, do battle with the ravens initially gaining the upper hand and Arthur's men then turning the tides of battle. Eventually, Owein is persuaded to raise a banner and combat ceases. The forces unite and both men head off to their next battle.

The outlines of Chrétien's Yvain, the Knight of the Lion and Owain, or the Lady of the Fountain are essentially the same; Owain hears of a magical storm-making fountain in the forest of Brocéliande and seeks it out, only to find it defended by an excellent knight. He defeats this warrior and marries his wife Laudine, but forsaking his marital duties for knightly exploits, he loses her love. With the aid of a lion he rescues from a serpent, he completes several adventures and is eventually reunited with his lady.

He also appears in most of the later accounts, his importance indicated by his close friendship with Gawain and the passage in the Mort Artu section of the Lancelot-Grail cycle where he is one of the last knights to die before Arthur.

Almost all versions of the Arthurian story have Owain as Urien's son and Arthur's nephew, and the later accounts assume his mother is Morgan le Fay, if not one of the King's other half-sisters. He has a half brother called Owain (or Yvain) the Bastard, the product of a union between Urien and his seneschal's wife. The Welsh give Owain a twin sister, Morvydd, and as Arthur's maternal nephew he is a cousin to Gawain and the Orkney clan.