The kingdom of Dumnonia

The Celtic Kingdom of Dumnonia existed between the fourth and eighth centuries. The name derives from the Celtic tribal people the Dumnonii who inhabited the area which is now known as Cornwall (Kernow), Devon (Dyfneint- meaning 'deep valley dwellers') and Somerset (the 'Summer Land' of the Mabinogion).

Documentary evidence of the Dumnonii's history is scant but archaeological evidence suggests thats its people had rich and diverse contacts with Wales. 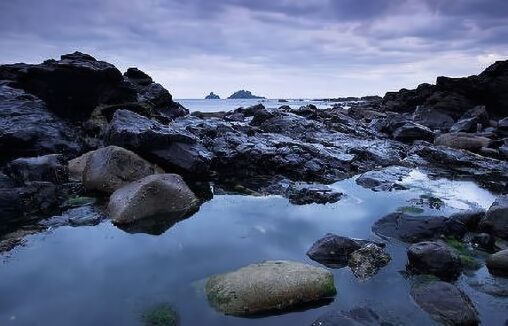 The Iron Age earthwork of the Dumnoni at Castle-an-Dinas, near St. Mawgan in Cornwall stands 702' above sea level. The earthwork is generally thought to be one of the most significant hillforts in the British Isles. It is thought to have been occupied circa 400BC to 150 AD. The castle consists of four large circular ramparts. Two Bronze Age barrows are set in the interior, the North barrow is now a hollow with a stone lying in it. The inner circle is around sixteen hundred and fifty feet by fifteen hundred and occupies a commanding position. St. Piran's Round, which is situated directly east of Perranporth consists of an earthwork amphitheatre and is the most famous of all Cornish 'playing places', although the origins of the Round are uncertain, it was dated from well before the Romans invaded Briain and is thought to have originated in the Iron Age. Today the Celtic Gorsedd ceremony is sometimes performed at St. Piran's Round.

The Dumnonii seem to have accepted the Roman conquest without resistance and as a result, few garrison forts were placed in their territory, although this area never fully adopted Roman ways of life. Lifestyles and types of settlements remained little changed from the Iron Age through the Roman period. Exeter already the Legionary Fortress Isca Dumnoniorum was also transformed into the capital of Civitas.

Known to the Celts as Caer Uisc, Exeter later became the capital of the Dumnonian Britons up until circa 936 when the Saxon King Athelstan expelled them. The eastern boundary of Dumnonia receeded over time as the gradual westward expansion of the neighbouring Anglo-Saxon kingdom of Wessex conquered its territory. By the middle of the ninth century, during the West Saxon advance, the seat of the kings of Dumnonia may have been relocated further to the west, at Lis-Cerruyt (Liskeard).

The tribal kings of Dumnonia had several fortresses in the province including Din-Tagell (modern Tintagel Castle), Cadbury Castle, and Castle Dore. Inhabited from around 100B.C to the third century A.D. Chysauster Iron Age Village, near Penzance, in the Penwith District of southwest Cornwall, was probably built by members of the ancient Celtic Dumnonii tribe. 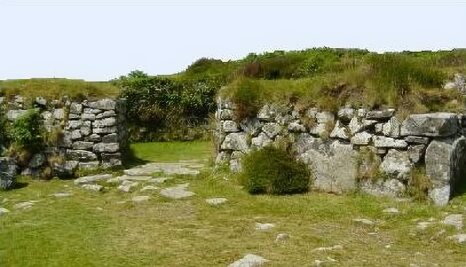 The village has nine courtyard houses, with a further house lying just beyond. All similar in layout, a passage leads from the house entrances to an inner courtyard. Each dwelling has a main chamber with further chambers progressing from it. The roofs were probably composed of thatch and there is some evidence that they once possessed drains. The purpose of the collapsed fogou, (Cornish for cave) or underground tunnel at Chysauster, which originally ran well over 16 metres in length, is unknown. Traces of the ancient field enclosures of the village's Iron Age inhabitants can still be seen in the surrounding area.

The invading Anglo-Saxons referred to Dumnonia as West Wales. In 577 Ceawlin of Wessex's victory at the Battle of Deorham caused the Celts of Dumnonia to be cut off by land from their Welsh comrades. In around 652 Cenwalh of Wessex defeated the Dumnonians at the battle of Bradford-upon-Avon. The West Saxon victory at the Battle of Peonnum, possibly modern Penselwood in east Somerset, around 658, resulted in the eastern part of Dumnonia being permanently annexed by Wessex. In 710 Geraint, King of Dumnonia was defeated in battle by King Ine of Wessex who then incorporated Devon into Wessex.

Cornwall alone then held out against the Saxons, the natural fortress of Cornwall became a place of refuge for many of the Celts after they were driven westwards by Saxon conquerors. The name Cornwall derives from the old English pre seventh century Cornwealas tribe, from Kernow, the native name that the Cornish used to refer to themselves, it is of uncertain etymology, perhaps connected with a Celtic element meaning "horn" or "headland" compounded with the Anglo-Saxon "Wealas" "strangers", or "Foreigners".

In 825 a battle was fought between the "Welsh", presumably those of Cornwall, and the Anglo-Saxons. The Anglo-Saxon Chronicle states:- "The Wealas (Cornish) and the Defnas (men of Devon) fought at Gafulforda" (perhaps Galford in west Devon). However, there is no mention of who won or who lost, or whether the men of Cornwall and Devon were fighting each other or on the same side.

Inspired by Frankish military and imperial ideas, King Egbert of Wessex made rigorous efforts to bring the native Celts, known to the Saxons as Wilisc men (i.e. foreigners) into subjection, and conquered after the Battle of Hingston Down. The battle took place in 838 when Egbert defeated an alliance that had been formed between the Cornish and the Vikings. It was this defeat that completed the subjugation of the western region to Wessex. 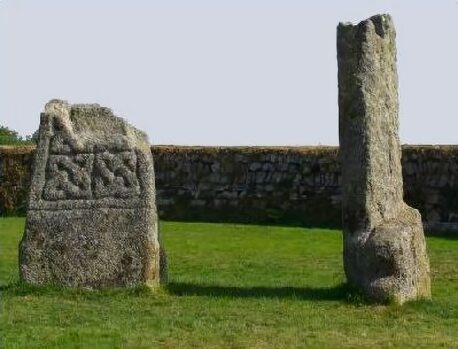 Donyarth or Doniert was the last recorded king of Cornwall, he was probably an under-king, a vassal of the West Saxons. Doniert is recorded on an inscription on King Doniert's Stone, a ninth-century cross shaft that stands at St Cleer in Cornwall. The Dark Age monument consists of two granite stones, the remains of crosses, which are carved with Latin inscriptions and intricate patterns. One of the inscriptions reads ONIERT PROGAVIT PRO ANIMA, 'Doniert ordered (this) for his soul'. The stones stand in a small signposted enclosure on the B3254 road that runs from Minions to Dobwalls, near the edge of Bodmin Moor. The Annales Cambriae recorded that Doniert drowned in the River Fowey in 875. His death may have been an accident, but it was recorded in Ireland as a punishment for collaboration with the Vikings.

DNA studies have found native Cornish people are genetically different from their counterparts across the Tamar. The study, by researchers at Oxford University, drew up a genetic map of the British Isles based on an analysis of DNA variations in thousands of people in rural areas. It found the Welsh, followed by the Cornish, could claim to be the most ancient Britons and the most genetically distinct of all the groups on mainland Britain.

Cornish, a branch of the Brythonic Celtic family of languages, belonging to the same linguistic group as Welsh, Breton and extinct Cumric, spoken in the north of England, diverged from Welsh towards the end of the seventh century A.D. Use of the language gradually declined as communication routes with the rest of the country progressed until in Elizabethan times it was confined to the southern limits of the county, west of Truro.

The Cornish language has been extinct for many years. Its last reputed monolingual speaker was Dorothy Pentreath of Mousehole, who died in 1777, her gravestone with its Cornish inscription can be seen at St. Paul's church at Mousehole. A further candidate for the last native speaker of the language was John Davey of Zennor, who died as late as 1891. Fishermen were known to count fish in Cornish up until the 1940s. In 1904 Henry Jenner (1848 - 1934), a Celtic scholar and cultural activist, published a Handbook of the Cornish Language which began the revival of Cornish as a living, spoken language. The Cornish Language has undergone a number of revivals since that time.

The language survives in many of the distinctive place names of Cornwall, Tre as in Trebetherick and Trelissick and many more Cornish place names means a homestead and its nearby buildings. The Cornish prefix Pol as found in Polperro, Poldhu, Polzeath, Polruan, means a pool and Pen as in Penzance, Pendennis, Penryn, Pentire, etc means an end of something, a headland or head.