Cunobeline, known in Latin as Cunobelinus, was a Celtic king of Britain in the period immediately before the Roman conquest. He controlled a substantial part of south-eastern Britain and ruled from the late first century BC until around 42 AD and is the most famous British leader prior to the Roman occupation. His name possibly means "hound of Belenus" from the Brythonic Celtic koun "hound" combined with the name of the god Belenus. 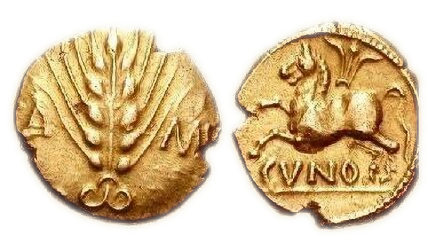 Mentioned by the Roman historians Dio Cassius and Suetonius, who, in his life of the emperor Caligula, refers to Cunobelinus as 'Britannorum rex' (King of the Britons). Many of the coins minted during his reign have been discovered.

Cunobeline's father Tasciovanus or Teuhant is assumed to have been the son or grandson of Cassivelaunus, who fought Julius Caesar during his second invasion of Britain. Shortly before or soon after succeeding his father, Cunobelinus conquered the territory of the powerful Trinovantes tribe, who occupied what is today known as Essex. Cunobelinus seems to have rose to power in around 9 AD and minted coins from both Camulodunum (Colchester) which was the capital of the Trinovantes and Verlamion (modern St Albans), capital of the Catuvellauni tribe, who inhabited the area to the north of the River Thames, the modern counties of Hertfordshire, Cambridgeshire, Northamptonshire, Bedfordshire, Buckinghamshire and Oxfordshire east of the River Charwell.

The earliest issues of his coins are from Camulodunum, which indicates that he first took power there. He is named on the coins as the son of Tasciovanus, a previous chief of the Catuvellauni, the most powerful tribe in southern Britain. His kingdom, with its coinage and wheel pottery, had good trade links, friendly relations with the Roman empire under Tiberius and with its suggestion of the beginnings of literacy was highly developed.

Reference to Cunobeline can be found in Celtic legend. A genealogy in the medieval Welsh manuscript Harleian 3859 contains three generations which read "Caratauc map Cinbelin map Teuhant". This is the equivalent of "Caratacus, son of Cunobelinus, son of Tasciovanus". 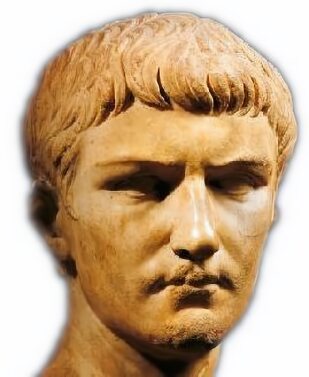 Geoffrey of Monmouth's Historia Regum Britanniae (History of the Kings of Britain) written in the twelfth century, refers to him as Kymbelinus, son of Tenvantius, who was brought up at the court of Augustus. Geoffrey's of Monmouth's work was incorporated into Raphael Holinshed's Chronicles in 1577, which in turn provided the inspiration for William Shakespeare's romantic play 'Cymbeline'.

Cunobelinus had three sons, Adminius, Togodumnus and Caratacus or Caradog, and a brother, Epaticcus. Epaticcus expanded his influence into the territory of the Atrebates in the early 20s AD, taking the Atrebatan capital Calleva (Silchester) by about 25 AD. He continued to expand his territory until his death in about 35 AD.

Cunobelinus' son Adminius, from the evidence of his coins, had control of Kent but was banished by Cunobeline, in about 40 AD, he fled to Rome and made attempts to persuade Emperor Gaius Caligula to invade Britain. Although Caligula did assemble forces of about 200,000 troops with an enormous amount of supplies, the planned expedition never materialized and was abandoned in farcical circumstances. Caligula, an unstable personality, advanced from Germany to the English Channel where he lined up his legions at the seashore. He then sailed into the Channel in a ship and returned to shore

"Having embattled his army upon the ocean shore, planted his ballasts and other engines of artillery in their several places (and no man wist the while or could imagine what he went about), all at once he commanded them to gather fish-shells (sea shells), and therewith to fill their headpieces and laps, terming them the spoils of the ocean." The shells were then sent to Rome as booty to be put on display.

Caligula, cruel, sadistic, extravagant, and sexually perverse, was assassinated by officers of the Praetorian Guard in January 41 AD and Cunobelinus himself died circa 42 AD. Caratacus completed the conquest of the Atrebates, their king, Verica, fled to Rome, providing the new Emperor, Caligula's successor, Claudius, with a pretext for his invasion of Britain. Caratacus and his brother Togodumnus later led the British resistance against the Roman conquest of Britain by Emperor Claudius in 43 AD. Togodumnus was killed in battle against the Romans and although Caractacus continued to lead the Celts, he was finally was defeated in battle and was taken prisoner to Rome, where he was later pardoned by Claudius.