The Last Stand of the Druids

The Celtic Religion believed that the environment had magical links and practised ritual and sacrifice to appease their many deities, including human sacrifice. Their god lay in the water of fast-flowing streams, and the Sacred Oak and Mistletoe. The moon, the sun and the stars were especially important, the Celts thought that there were supernatural forces. and worshipped the time of the tide and the changing of the seasons. Their sacred places were situated in woods or simple groves.

Site of the Druids last stand 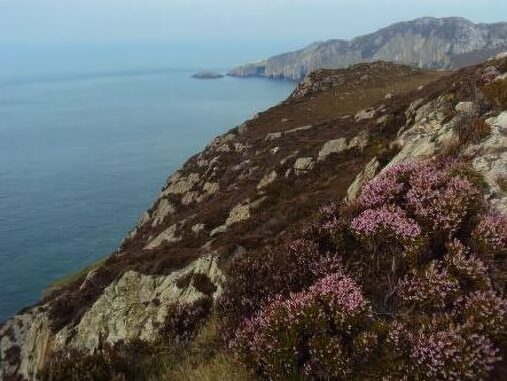 Often the victims which they sacrificed to their gods would be imprisoned in a wooden effigy or Wicker Man and burned alive. Another form of sacrifice was known as the “threefold death”, where the victim would be subjected to near strangulation and virtual drowning before finally being stabbed to death. The Druids, or priestly class, were the only tribe members allowed to carry out these ceremonies, it was also believed that they could foretell the future. The Druids were also responsible for the telling of the sacred myths, whose legacy lives on today in traditional Celtic literature.

Julius Caesar encountered the Druids during his conquest of Gaul from 58 to 49 BC. They were the only men powerful enough to organise opposition to Roman rule throughout the Celtic tribes. After the Roman conquest of Britain in 43 A.D., the Druids were outlawed.

In AD 60 the Roman general Gaius Suetonius Paulinus, in an attempt to break the power of the druids, crossed the Menai Strait, to attack the druids who had rallied in their stronghold of the Island of Mona off the mainland of North Wales (Anglesey) where they made a last stand against the conquering legions of Rome and attempted to defend themselves by using magical arts, Tacitus left a description of the Battle of Mona:-

"On the shore stood the opposing army with its densest array of armed warriors. Between the ranks dashed women, attired in black like the Furies with their hair dishevelled, waving burning brands. All around them were Druids lifting their hands to heaven and pouring forth dreadful implications. Our soldiers were so petrified by the unfamiliar sight that as if their limbs were paralyzed, they stood motionless, exposed to wounds. Until at last, urged by their general not to quail before a troop of frenzied women, they bore the standards onward, smote down all resistance, and wrapped the foe in the flames of his own brands."

After their victory at the battle of Mona, many of the druids were massacred, no quarter was given and the shrine and the sacred groves were destroyed. The surviving Druids fled to Ireland taking with them the Bardic Mantle to avoid disclosure and their ritual observances and magical arts went underground. The massacre led to Boudicca's Revolt as Paulinus attack on Mona left the rest of the country open to attack. 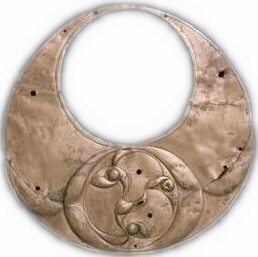 The Llyn Cerrig Bach hoard consists of over a hundred and fifty items of bronze and iron discovered at the Cors yr Ynys bog at the southern margin of Llyn Cerrig Bach, a small lake in the north-west of Anglesey. The items were discovered at the time of the Second World War during the construction of the RAF airfield at Valley, Anglesey, by workmen digging peat from the site. They may have been placed in the lake as votive offerings. The hoard is considered to be one of the most important collections of La Tène style metalwork discovered in the British Isles, and the most important in Wales

The first object to be unearthed was an iron gang chain, which was used for slaves. This was caught up in the teeth of a harrow and was not at first identified as being ancient. It was attached to a tractor and used to pull lorries out of the mud. Although around 2,000 years old, the chain adequately performed this function. Identification of the chain prompted a thorough search of the area which resulted in the discovery of a large number of other objects, mainly of iron but some of bronze or copper alloy. A total of 181 artefacts are known to have been recovered.

The superb collection includes seven swords, six spearheads, fragments of a shield, part of a bronze trumpet, two gang chains, fragments of iron wagon tyres and horse gear. In addition, blacksmith's tools, fragments of two cauldrons, iron bars for trading and animal bones were found. The location is said to be an important centre for the Ancient Celtic Druids. Some of the offerings may have been made in response to the threat from the Romans.

Most of the items found at Llyn Cerrig Bach can be seen in the National Museum of Wales in Cardiff. The range and size of the Llyn Cerrig Bach collection are of great importance to our understanding of Iron Age weaponry, metalworking, tools and the development of art styles.

The Battle of Caer Caradoc PreviousNext Boudicca, Queen of the Icceni