The existence of the fifth-century high-king of Britain, Vortigern, though interwoven with legend, is not doubted. During the decades which followed the withdrawal of the Romans from Britain, Vortigern emerged as a leader of the Britons in around 425, having usurped the throne from Constantine, the father of Ambrosius Aurelianus and Uther Pendragon. Ambrosius and Uther, then children, were exiled to Brittany to live with their uncle. When attacked by the Picts and Scots in the north, Vortigern, following a precedent of using mercenaries set by the Romans, invited the Saxons to England to combat the northern invaders in return for a grant of land. 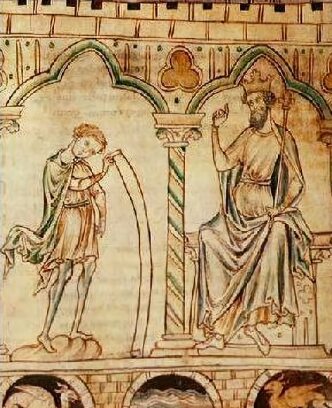 In his 'On the Ruin and Conquest of Britain', the sixth-century chronicler Gildas informs us that Vortigern invited "the fierce and impious Saxons" to settle in Britain. Gildas goes on to inform us that a small group of Saxons arrived first, led by Hengist and Horsa, they settled on the eastern side of England, the Saxon mercenaries were successful in driving out the Picts and Scots but invited more of their countrymen. The Saxons later demanded that "their monthly allotments" be increased and, when they were eventually refused, plundered the lands of the Celts. Gildas implies that either he or his source obtained at least part of the story from the Anglo-Saxons. He does not refer to Vortigern as the king of Britain, but rather a usurper.

Geoffrey of Monmouth states that Vortigern married Hengist's daughter, the Saxon Rowena, after which his son Vortimer, rebelled against him. According to the Historia Brittonum, attributed to a Nennius, a monk from Bangor, in Gwynedd, and probably compiled during the early ninth century:- "At length Vortimer, the son of Vortigern, valiantly fought against Hengist, Horsa, and his people; drove them to the isle of Thanet, and thrice enclosed them with it, and beset them on the western side. The Saxons now despatched deputies to Germany to solicit large reinforcements and an additional number of ships: having obtained these, they fought against the kings and princes of Britain, and sometimes extended their boundaries by victory, and sometimes were conquered and driven back ... Four times did Vortimer valorously encounter the enemy; the first has been mentioned, the second was upon the river Darent, the third at the Ford, in their language called Epsford, though in ours Set thirgabail, there Horsa fell, and Catigern, the son of Vortigern; the fourth battle he fought, was near the stone on the shore of the Gallic sea, where the Saxons being defeated, fled to their ships."

The rebellion came to an end on the death of Vortimer and the massacre of many of the British, Horsa, co-leader of the Saxons were also killed in battle, as was Categirn, another son of Vortigern. Vortimer was claimed to have been poisoned by his stepmother, Rowena. 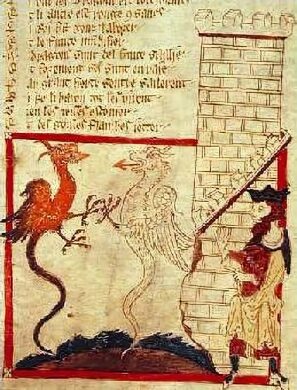 The remaining Saxon leader, Hengist, called for a peace conference, which took place on Salisbury Plain. In an event known as 'the Night of the Long Knives, on their arrival the Celts were treacherously massacred:- 'And Hengistus ordered the whole of his household that each one should hide his knife under his foot in the middle of his shoe. 'And when I shall call out to you and say "Eu nimet saxas" ( draw your swords!), then draw your knives from the soles of your shoes, and fall upon them, and stand strong against them. And do not kill their king, but seize him for the sake of my daughter whom I gave to him in matrimony, because it is better for us that he should be ransomed from our hands.' And they brought together the conference, and the Saxons, speaking in a friendly way, meanwhile were thinking in a wolfish way, and sociably they sat down beside the man. Hengistus, as he had said, spoke out, and all the three hundred elders of King Vortigern were slaughtered, only he was imprisoned and was chained, and he gave to them many regions for the ransom of his soul, that is Est Saxum, Sut saxum, Middelseaxan, with other districts under his control which they named.'

The Anglo-Saxon Chronicle, compiled in the reign of King Alfred the Great (871-899), mentions dates and locations of four battles that Hengist and Horsa fought against the Celts in Kent. It records Vortigern as the leader of the Celts in only the first battle. No Saxon defeat is acknowledged in the chronicle, although the geographical sequence of the battles certainly suggests a Saxon retreat. It locates the last battle, dated 465 in Wippedsfleot, as the place where the Saxons first landed, which is thought to be Ebbsfleet near Ramsgate. 455 is the last date when Vortigern is mentioned in the Anglo-Saxon Chronicle. 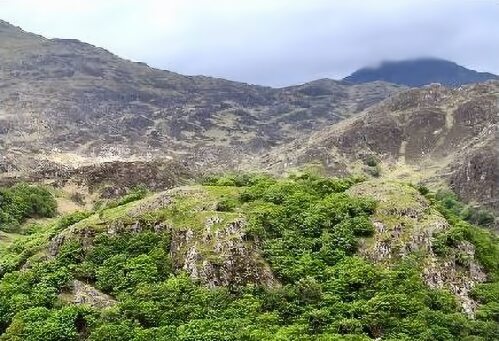 According to Gildas, Vortigern, having sought refuge in Wales, attempted to erect a fortress on Yr Aran, above the village of Beddgelert in Snowdonia. Where Myrddin or Merlin is said to have prophesied how the White Dragon of the Saxons, though winning the battle at present, would soon be defeated by the British Red Dragon.

The Celts rebelled against Vortigern and Ambrosius Aurelianus succeeded him as high-king, to continue the struggle against the Saxons. Merlin is said to have handed over the mountain site which Vortigern had failed to build to Ambrosius, and became known as Dinas Emrys (the "Fortress of Ambrosius"). Vortigern further sought refuge in the refortified hillfort of Tre'r Ceiri in Yr Eifl in Llyn, when Ambrosius pursued him there he fled further south, to the hillfort of Caer-Guorthigirn above Ganarew. Here, it is said, the hall of the fortress was struck by lightning and Vortigern burnt to death. He was buried in Dyfed or the Llyn Peninsula.

The Pillar of Eliseg, a mid-ninth-century stone cross in North Wales, gives the Brythonic variant of Vortigern- Guorthigern, also states that his wife was Sevira, the daughter of Magnus Maximus and gave a line of descent from Vortigern's son Brydw, to the royal family of Powys, who erected the cross. A valley on the north coast of the Lleyn Peninsula, known as Nant Gwrtheyrn or "Vortigern's Gorge", once held a small barrow known locally as "Vortigern's Grave", along with a ruin known as "Vortigern's Fort". Other fortifications associated with Vortigern are at Arfon in Gwynedd, Bradford-on-Avon in Wiltshire, Carn Fadrun in Gwynedd, Clwyd in Powys, Llandysul in Dyfed, Old Carlisle in Cumberland, Old Sarum in Wiltshire, Stonehenge and Rhaeadr Gwy in Powys.