Maiden Castle, situated around 2 miles from the town of Dorchester, is the largest hillfort in Britain, covering 45 acres with huge earth walls rising to around 6 metres, even by modern standards, Maiden Castle is a massive earthwork.

The hillfort was first occupied in about 3,000 BC, built over an earlier neolithic settlement, it consists of a complex series of multiple ramparts and ditches. The name 'Maiden' derives from the ancient Celtic words 'Mai Dun' meaning great hill. Flint tools and other objects dating from Neolithic times have been found on the site. 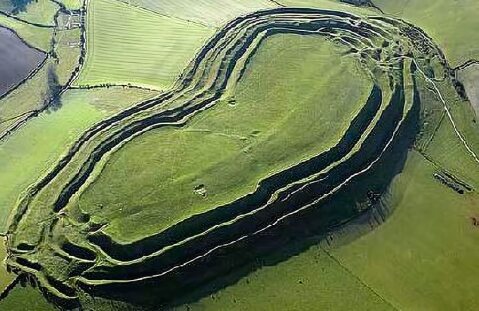 In the Iron Age the fort was occupied by the Durotriges tribe, who inhabited the areas of modern Dorset, south Wiltshire, south Somerset and Devon east of the River Axe. In the Early Iron Age, Maiden Castle was one of over 100 hill such forts of similar size built around the same time in the area. By the Middle Iron Age, Maiden Castle was expanded westwards, and the ditch was extended to enclose the neighbouring Hog Hill, it then became the largest hill fort in Britain and one of the largest in Europe. The summits of the two hills encompassed by the new, larger hill fort were separated by a valley. A shaft dug into the valley was possibly used as a water source.

During the Roman conquest of Britain in 43 AD and the future Emperor Vespasian's campaign to conquer the tribes of the Atrebates, Dumnonii, and Durotriges in the southwest of Britain which took place in AD 43-47, the Romans attacked the fort and a fierce battle ensued by its eastern entrance.

During the Roman conquest of Britain in 43 AD and the future Emperor Vespasian's campaign to conquer the tribes of the Atrebates, Dumnonii, and Durotriges in the southwest of Britain which took place in AD 43-47, the Romans attacked the fort and a fierce battle ensued by its eastern entrance.

Recent excavations have discovered the bodies of 38 Iron Age warriors, interred with food and drink for their journey into the afterlife. Maiden Castle contains much evidence of the bloody battle that took place there. When mass graves were excavated at Maiden Castle near Dorchester during the 1930s, a skeleton with a Roman ballista bolt lodged in its spine was unearthed. The skeleton is now housed in Dorset County Museum, which displays many of the objects found at Maiden Castle.

The eastern part of the hill fort remained in use for the first few decades of the Roman occupation. Many first-century Roman artefacts have been found near the east entrance and in the centre of the hill fort. In the fourth century the Romans erected a temple on the site, the remains of which are still visible in the northeast sector of the fort. Maiden Castle is located off the A354, 2 miles south of Dorchester, it is now in the care of English Heritage and is open all year round with free entrance to the public.