Gwenllian of Wales, the only child of Llywelyn the Last, and his wife Eleanor, daughter of Simon de Montfort, Earl of Leicester was born in June 1282 at Garth Celyn Abergwyngregyn near Bangor. The exact date of her birth is uncertain.

Her mother Eleanor de Montfort died in childbirth and her father was slain by the forces of Edward I of England six months later, while separated from his army at the Battle of Orewin Bridge fought on 11 December at Builth Wells. Gwenllian's uncle Dafydd assumed guardianship of his orphaned niece and continued fighting the English for several more months but on 21 June 1283, he was taken prisoner by the English and later taken to Shrewsbury, where he was later hung, drawn, and quartered. 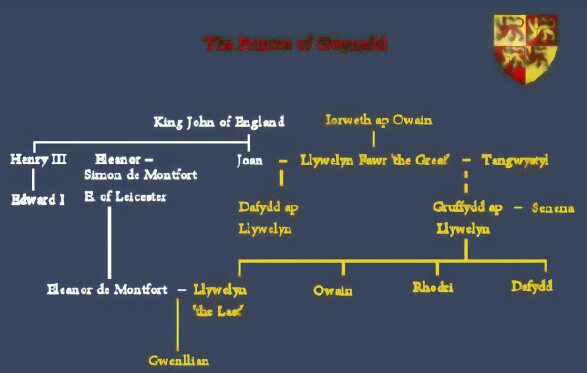 With the defeat of the Welsh forces, the infant Princess Gwenllian along with her cousin Gwladys ferch Dafydd, was captured alive. As the heiress of Llywellyn the Last, Gwenllian represented a threat to her mother's cousin Edward I and his hold on Wales, determined to crush Welsh national resistance and remove any rallying point for them, on November 11, 1283, unable to harm such a young child, Edward dictated a letter to the Prior and Prioress of Sempringham in Lincolnshire:-"

Having the Lord before our eyes, pitying also her sex and her age, that the innocent may not seem to atone for the iniquity and ill-doing of the wicked and contemplating especially the life of your Order..."

Four years after Gwenllian was incarcerated at the Abbey of Sempringham, Edward issued a mandate to Thomas Normanvill "to go to the places where the daughters of Llewellyn and of David his brother, who have taken the veil in the Order of Sempringham, are dwelling, and to report upon their state and custody by next Parliament"

Dafydd's two young sons were taken to Bristol Castle, where they too were held prisoner, Llywelyn ap Dafydd died there in 1287, some four years after his capture, and was buried in the Dominican Church. Edward ordered a cage made of timber, bound with iron, in which to hold his brother Owain ap Dafydd more securely at night. Owain was never released from his captivity. Edward appropriated the title of Prince of Wales, bestowing it on his son, Edward of Caernarvon, at a Parliament held in Lincoln in 1301. 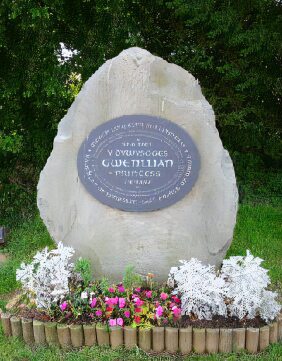 The Gilbertine Priory of St Mary at Sempringham was situated in the Lincolnshire fenland, Gwenllian was cloistered there for the rest of her life to ensure her disappearance from Welsh history. Edward I's grandson, Edward III endowed Gwenllian with a pension of £20 per year to be paid on her behalf to the priory for her food and clothing. Her death there, at the age of 55, as a nun of The Gilbertian order, was recorded by the priory's chronicler in June 1337. She was buried on the grounds of the abbey and her grave has since been lost.

Gwenllian died never having spoken her native tongue and never learning to say her own name correctly for she is referred to as Wencilian in a document written at the time of her death to Edward III. Following the Dissolution of the Monasteries, Sempringham was gutted, its ruins eventually disappeared taking their secrets with them.

A plaque of Welsh slate, financed by public subscription, was placed by a stream near Saint Andrew's Church in Sempringham in her memory in 1993, following a campaign by the late Captain Richard Turner of Caernarfon and Angharad Thomas. The church is situated at the end of an isolated track and occupies the site of the former priory. The monument's inscription reads:-

'In memory of Gwenllian Daughter of the last Prince of Wales

Having been held prisoner for 54 years'

The Welsh peak, formerly known as Carnedd Uchaf, in the Carneddau range of mountains in Snowdonia was renamed Carnedd Gwenllian on 26 September 2009, in honour of Wales's 'lost princess'.

Castles of Edward I PreviousNext Castles of the Native Welsh Princes