The Castles of Edward I

Following his conquest of Wales, Edward I built a formidable iron ring of castles, a days march from apart, to defend his acquisitions from Welsh rebellion. After Edward's first Welsh campaign when he succeeded in isolating his adversary, Llywelyn the Last in Snowdonia and Anglesey, the English king erected the castles of Flint, Rhuddlan, Builth Wells and Aberystwyth. After the failure of Llywelyn's second uprising in 1282, the Iron Ring was extended to include castles at Conwy, Caernarfon and Beaumaris.

Commanding Caernarfon Castle is situated at the southern end of the Menai Strait between North Wales and Anglesey, and lies eight miles south west of the town of Bangor. 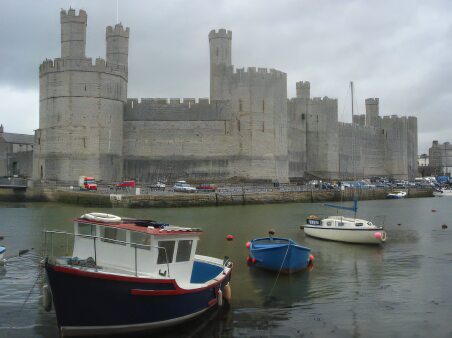 Construction on the castle commenced in 1283, after the heartland of Snowdonia had been captured by English forces. The castle was built under the direction of Edward I's master architect Master James of St. George, it was designed to be not only as a military stronghold but also as a seat of government and royal palace and was intended to echo the walls of Constantinople, which Edward had seen whilst on crusade during the latter years of his father, Henry III's reign. Bestriding the mouth of the River Seiont, at a strategically important point, the castle boasts unique polygonal towers, intimidating battlements and colour banded masonry and dominates the walled town of Caernarfon.

The cost of construction totalled £22,000 a hefty sum for the time. The castle was never completed, and careful examination will reveal joints visible in several places on the internal walls, which were intended to accept further walls which were never built.

During the Welsh uprising of 1294, Madog ap Llywellyn captured the castle, Edward responded promptly and retook it in 1295. It was besieged during the reign of Henry IV during the revolt of the Welsh leader and patriot Owen Glendower in 1403 and 1404. During the Civil War, the castle was surrendered to the Cromwell's Roundheads in 1646.

Caernarfon Castle was the venue for the investiture of the future Edward VIII (later Duke of Windsor) as Prince of Wales in 1911 and in July 1969, that of Prince Charles, both were lavish ceremonies. A special crown was made for the occasion of Prince Charles investiture, Anthony, Earl of Snowdon, the then-husband of his aunt, Princess Margaret, designed the modern perspex canopy over the dais. The Earl of Snowdon was appointed constable of the castle in 1963.

Caernarfon Castle is now owned by CADW and houses the regimental museum of the Royal Welch Fusiliers.

Magnificent Conway Castle, has been described as 'one of the great fortresses of medieval Europe', and is without doubt one of the most impressive of Welsh castles. 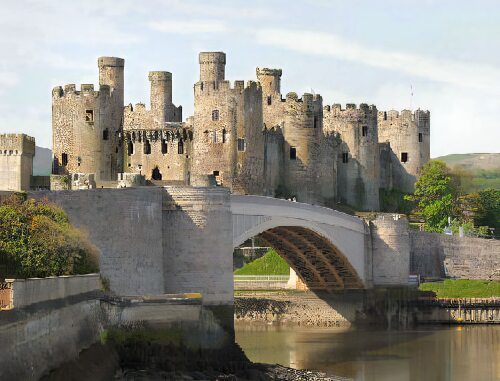 The castle was built on the site of an earlier Welsh monastery, founded by Welsh prince Llewelyn Fawr and was designed by the king's master architect-mason, James of St. George, being built between 1283-1289.

The castle stands in a strategic position perched on a rock and dominates the Conwy estuary, on approach it conveys a deep sense of strength and impregnability. Conwy Castle was one of Edward I's most expensive projects and originally had a coat of whitewash.

The castle provides the visitor with the opportunity of walking the top portions of the soaring curtain walls, from which the views over the town, its Medieval walls and the Conwy Estuary are stunning.

Conwy superficially resembles a concentric castle, but more accurately it is linear, and has eight towers and two barbicans, with walls that are 4.6 metres (fifteen feet) thick in places. The castle's shape was largely dictated by the rock on which it was built. The inner ward contains apartments built for Edward I and his consort, Eleanor of Castille in 1283. The interior of the castle is not as complete as Caernarfon. The huge towers measure over 9.1 metres (30 feet) in diameter with walls that are up to 4.6 metres (15 feet) thick. In height, they total about 70 feet and contain several stories equipped with rooms and staircases. 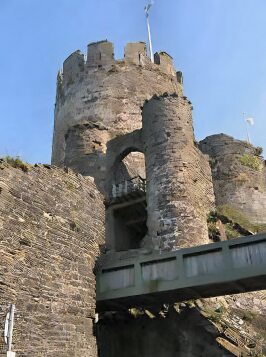 Rebellion among the Welsh broke out in 1294 headed by Prince Madog, which resulted in the damage of several of Edward's castles. He marched to Wales at the head of an army to suppress the rebellion, where he set up his headquarters at Conwy. Soon after he was ensconced inside the castle when the River Conwy flooded, trapping the English inside the castle for several days. Supplies of food and water became dangerously low before the water eventually receded.

Conwy Castle degenerated into a state of disrepair within a generation of its completion. Repairs and modifications were carried out by Edward, the Black Prince, in the fourteenth century.

The castle was besieged during the Welsh uprising of 1294. King Richard II stayed there on his return from Ireland in 1399, until lured out by the Earl of Northumberland acting on behalf of his cousin and rival for the throne, Henry of Bolingbroke. Northumberland swore in the castle chapel to grant Richard safe passage but went back on his oath and imprisoned him at Flint.

By the early seventeenth century the castle had fallen into such a state of disrepair that it was sold off in 1628 for a mere hundred pounds to Viscount Conway. During the period of the English Civil War, it was fortified and defended by the royalist Archbishop of York, but following a siege that lasted for three months, was taken by Cromwell's Roundheads.

The castle is now owned by CADW (The Welsh Historic Trust) Exhibits depicting life in the castle in the medieval period are regularly held. There is also a scale model of the castle and the town of Conwy on display in the chapel tower.

Dramatically located high upon a steep, rocky outcrop, Harlech Castle is defended on its seaward side by precipitous cliffs which drop sheer down to the Irish Sea, while a moat provides protection for the other three sides. In Edward I's time, the sea came right to the foot of the cliffs with a stairway running from the sea. 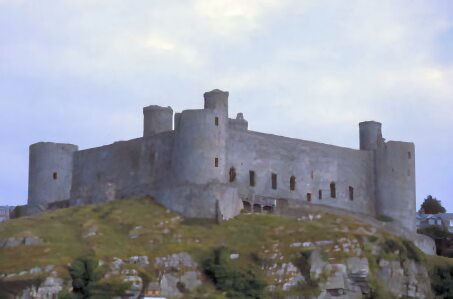 Building on the castle commenced in 1283 and it saw completion in 1290. The castle is of a concentric design with an inner curtain wall with large round towers at each of the corners, further defences are provided by an outer perimeter of much lower walls that surround the outer bailey. The inner walls housed the domestic buildings, which include a great hall, a chapel, bakehouse, granary and smaller hall. A huge gatehouse protects the castle's more vulnerable side.

The Welsh leader Madog ap Llywelyn launched an unsuccessful attack on the castle during his rebellion of 1294-5, but in 1404 Owen Glendower succeeded in capturing it, he held a parliament there and for a time it served as his capital before being retaken by the English in 1408

During the Wars of the Roses, Harlech Castle was the subject of a lengthy siege lasting for seven years, the castle was the last to hold out for the Lancastrian cause. Eventually starvation and famine forced the defenders to surrender, and Dafydd ap Ieuan, the constable, handed over the castle to his Yorkist opponent Lord Herbert. The song Men of Harlech was written to commemorate the garrison's defenders.

The castle underwent a further long siege in the first part of the Civil War when it held out for the Royalist cause. It finally surrendered to the Roundhead forces in 1647.

Though not as famous as some of its more illustrious neighbours, Rhuddlan Castle in Flintshire is nonetheless impressive. 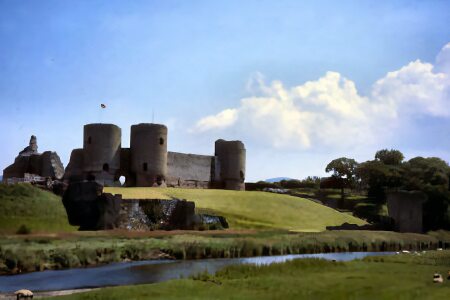 Located beside the River Clwyd, which allowed provisions to be brought in via a canal built specifically for that purpose, which was a truly mammoth enterprise for the time involving 1,800 ditchers, sandstone Rhudlan was the first concentric fortress built by Edward I and boasts impressive symmetry. The diamond-shaped inner ward has a high curtain wall, flanked on the angles with huge four storey twin-towered gatehouses and round towers. A broad ditch protects the narrow octagonal outer ward. Building commenced in 1277 and the castle was completed in 1282.

Rhuddlan Castle was the venue for the signing of the Statute of Rhuddlan in 1284. The Statute replaced Welsh rule of law with that of the English rule of law and was brought into effect following the defeat of Llywelyn the Last. The settlement lasted until the Act of Union of 1536, during the reign of Henry VIII.

Rhuddlan Castle was taken during the Civil War, and soon after much damage was done to the fabric. The ruins fell into further decay, much of the stone being taken away from local buildings. Conservation work commenced in 1947. The castle is now owned by CADW

The unfinished castle of Beaumaris, located on the Isle of Anglesey, 6 km northeast of the Menai Bridge, was the last of the great fortresses built by King Edward I to control Wales. The name Beaumaris is derived from the French for beautiful marsh, le beau Marais. 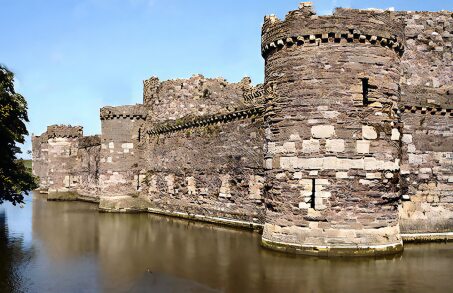 The castle was begun in 1295, following the quelling of the Welsh uprising under Madog Ap Llywelyn and spanned over 35 years. Edward's architect, James of St George, brought all his considerable experience and creativity to bear in its design, the biggest and most ambitious venture he ever undertook and it's a perfect example of a concentrically planned castle.

Master James of St. George was a craftsman imported by Edward from Europe, although he later adopted an Anglicized name. Edward much appreciated his work and paid him the vast sum of three shillings a day, (a labourer at the time earned around one shilling per week) The architect was also granted a manor in Wales. The ambitious project required a huge workforce. Probably around 2,500 workmen were employed in the construction of the castle, which included around 400 skilled stonemasons to cut and lay the stone.

The castle has an inner ring of defences surrounded by a lower outer circuit of walls, with the added defence of a moat, spanned by a drawbridge. An attacker would have had to surmount fourteen separate major obstacles to gain entrance, there are hundreds of cleverly sited arrow-slits, and deadly murder holes to defend entrances. The entrances to the outer and inner walls are staggered, meaning that if an enemy did breach the outer defences, they would have to turn sharply and face murderous broadsides from the castle walls before they reached the inner gate.

The curtain wall of the Inner Ward has a tower on each corner, plus a middle tower on the East and West walls, and a two-turreted North Gatehouse and South Gatehouse. The interior of the castle contains a beautiful chapel, and today hosts an exhibition on Edwardian castles in Wales.

Despite the huge sums of money that were spent on its construction, Beaumaris Castle was never completed and Beaumaris' significant defences were never put to the test. Edward I's conquest of Wales was practically complete at the time of construction, and unlike many others of his Welsh castles, it was never the subject of attack during the Civil War.

The castle is managed by CADW and is listed as a World Heritage inscribed site.