Romantic Hever Castle, the childhood home of Queen Anne Boleyn, the second wife of Henry VIII, is situated in the village of Hever, near Edenbridge in the beautiful countryside of Kent.

The oldest parts of the historic castle, the huge gatehouse and a walled bailey date back to 1270, when it was owned by William de Hever, a Sheriff who lived during the reign of King Edward I. The building is still entered via a wooden drawbridge across a moat. In the mid-fifteenth century, Hever Castle was purchased by Geoffrey Boleyn, along with Blickling Hall in Norfolk. He built the present Tudor manor house inside the castle walls in 1462. 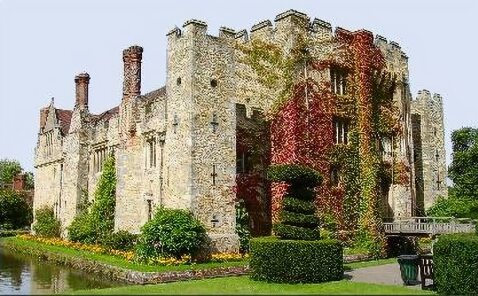 Geoffrey Boleyn was the younger brother of Thomas Boleyn, Master of Gonville Hall, Cambridge. Geoffrey began his career as a lowly apprentice mercer, but acquired a large personal fortune and was later to become Lord Mayor of London.

After Geoffrey's death the castle was inherited by his son William, who married Lady Margaret Butler, the younger daughter and co-heir of Thomas Butler, 7th Earl of Ormond. Hever Castle eventually passed to their son, Sir Thomas Bullen, who lived at the castle with his wife Lady Elizabeth Howard, eldest daughter of Thomas Howard, 2nd Duke of Norfolk, and the couple's three children George, Mary and Anne. Thomas Boleyn added a main Entrance Hall and Staircase Gallery to the property.

It is not known if Anne was born at Hever as the year of her birth is uncertain, but she lived there until being sent to the Netherlands court of Margaret, Archduchess of Austria in 1513. In the Autumn of 1514, Anne was a lady-in-waiting at the court of the Queen of France, Henry VIII's sister, Mary Tudor. After Mary's departure for England, Anne remained as lady-in-waiting to her successor, Queen Claude, until 1522. Following Anne's return to England after an absence of eight years, she was appointed lady-in-waiting to Henry VIII's first wife, Queen Catherine of Aragon. In 1523, she returned to live at Hever when she was sent from the English Court following her attempt to marry Lord Henry Percy. When Henry VIII became infatuated with her, he often stayed at nearby Bolebroke Castle to conduct his courtship with Anne. Royal favour was showered on the Boleyn family, Thomas Boleyn was created Earl of Wiltshire and Ormond in 1529, while his son George became Viscount Rochford. Anne was created Marchioness of Pembroke in 1532.

After the fall of Anne Boleyn and her and her brother George's execution for supposed adultery and incest, Thomas Boleyn was shunned at the court of Henry VIII, and himself died two years later, Following his death, Hever Castle came into the possession of the king, who in 1540 granted it to his fourth wife, the German Anne of Cleves as part of the settlement following the annulment of their marriage. 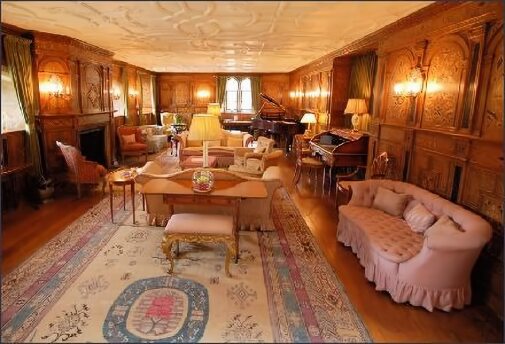 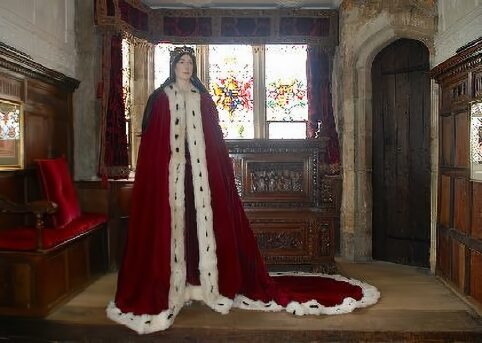 The Castle still retains one of Henry VIII's private locks, taken with him on his various visits to noblemen's houses and fitted to every door for his security. The building consists of three floors containing antique furniture, Anne Boleyn's prayer books, signed in her own handwritng, tapestries and a large collection of Tudor paintings. There are costumed figures of Henry VIII and his six wives on display in the hundred feet long gallery. Hever Castle also contains a museum of the Kent Yeomanry.

The remains of the original country house timbers can still be seen within the stone walls of the fortification, while the gatehouse is the only original part of the castle. It has the oldest working original portcullis in England. The Council Chamber in the gatehouse contains an assortment of historic swords, armour, instruments of execution and torture.

The Gardens at Hever Castle 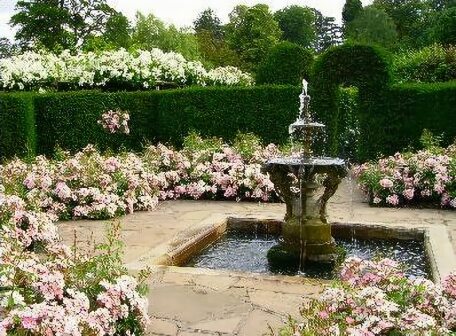 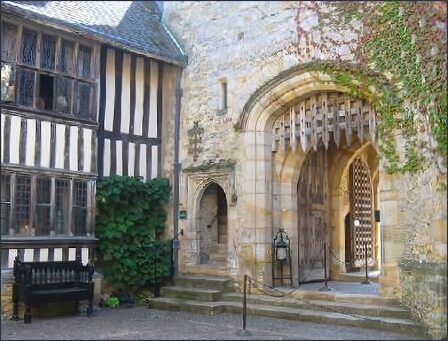 In 1903 Hever was purchased by the American millionaire William Waldorf Astor, who used it as a family residence. Astor restored Hever, while carefully maintaining the original external appearance, he also added the hundred room Tudor Village to accommodate his guests. William Waldorf Astor was created 1st Viscount of Hever in 1917, after becoming a British subject. He added the Italian Garden by a 35-acre lake to display his collection of statues and ornaments. The castle grounds include a yew maze, which was planted in 1904. The castle gardens contain a variety of interesting features including fernery, attractive rose gardens, a herb garden, and a topiary.

Since 1983 the castle has been owned by Broadland Properties Limited. The estate is now run as a conference centre, but the castle and grounds are open to the general public. A water maze was opened in 1999, the object of which is to get to the folly at the centre without getting wet, while in the children's adventure playground there is a tower maze.

Hever Castle is situated three miles South East of Edenbridge off the B2026 between Sevenoaks and East Grinstead in the village of Hever. Situated 30 miles from London in West Kent, exit the M25 at junctions 5 or 6 and follow the brown tourist signs.