Thomas Becket was born around 1118, in Cheapside, London, on 21 December, the medieval feast day of St Thomas the Apostle. He was the son of Gilbert Becket, a prosperous London merchant and his wife Matilda. Gilbert's father came from Thierville in Brionne, Normandy, and was either a small landowner or a knight. Matilda was also of Norman ancestry.

The young Thomas was educated at Merton Priory in England and later attended a grammar school in London. He spent a year in Paris and on returning to England he joined the household of Theobold, Archbishop of Canterbury. Thomas was entrusted with several important missions to Rome by Theobald, who also sent him to Bologna and Auxerre to study canon law and upon his return made him Archdeacon of Canterbury.

The murder of Thomas Becket at Canterbury Cathedral 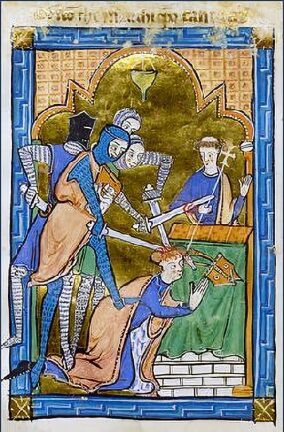 In 1154, Theobold introduced him to the new king, Henry II. The two were to become became firm friends and a strong bond was formed between them. Henry appointed Becket as Chancellor. The king sent his eldest son and heir Henry to live in Becket's household, with whom he formed a strong attachment. The young Henry was reported to have said Becket showed him more fatherly love in a day than his father did for his entire life.

Unlike the King, Thomas dressed extravagantly. A story is related that riding through London together on a cold winters day, Henry saw a pauper shivering in his rags. He asked Thomas would it not be charitable for someone to give the man a cloak, Beckett agreed that it would, whereupon Henry laughingly grasped Thomas' expensive fur cloak. There followed an unseemly struggle in which the King attempted to wrest the unwilling Beckett's cloak from him. Finally succeeding and most amused at Thomas's reaction, he threw it to the beggar.

Becket was sent on a mission to the court of France to negotiate a marriage between Henry and Eleanor of Aquitaine's's eldest surviving son, known as Young Henry and Margaret, the daughter of the King of France by his second marriage. This he carried out with aplomb, travelling with a great retinue, his lavish style made a vivid impression on the French. 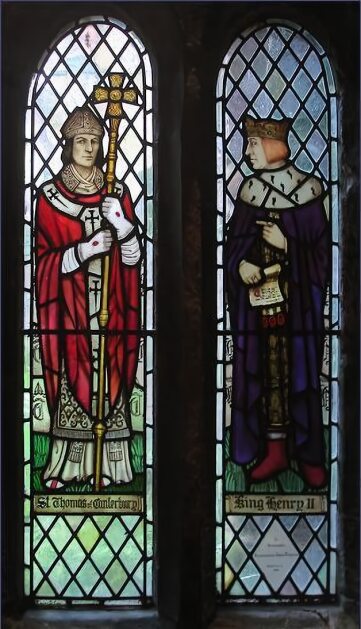 On the death of Theobald, Archbishop of Canterbury in 1162, Henry II decided to appoint Thomas Becket to the position. He assumed that Thomas would make an amenable Archbishop through whom he could gain control of the churches legal system. Becket, however, was unwilling to oblige and on his appointment resigned the Chancellorship. Henry flew into a furious rage.

Becket changed on becoming an Archbishop, taking his appointment very seriously, he abandoned his former luxurious lifestyle, he existed on a diet of bread and water and slept on the cold stone floor. Although he was attired in the rich vestments of an archbishop, underneath he wore a hair shirt as a sign of penance. He exhibited concern for the poor. Every morning thirteen poor people were brought to his home. After washing their feet Becket served them a meal. He also gave each one of them four silver pennies.

In medieval times, the Church reserved the right to try felonious clerics in their religious courts of justice and not those of the crown, Henry was determined to increase control of his realm by eliminating this custom. In 1163, Thomas entered into a disagreement with the king regarding the rights of church and state when he prevented a cleric found guilty of rape and murder from receiving punishment in the lay court.

A council was held at Westminster in October 1163, Becket was not a man to compromise, neither, however, was Henry. Eventually, Becket agreed to adhere to the 'ancient customs of the realm'. Adamant to win in the matter, Henry proceeded to clearly define those ancient customs in a document referred to as the Constitutions of Clarendon. Becket did eventually back down, but their quarrel continued and became more embittered, culminating in Beckett fleeing the country.

Four years later, Henry was anxious to have his eldest son, the young Henry, crowned in his lifetime to avoid a disputed succession, such as occurred after the death of his grandfather, Henry I. In January 1169, Henry and Becket met again at a conference at Momtmirail in Normandy, which broke up in quarrels between the pair, with the immovable Becket angrily excommunicating some of Henry's followers.

Irritated at such behaviour and refusing to be thwarted, Henry had the coronation of his son carried out by the Archbishop of York to insult Thomas further. In a resultant meeting, a compromise was finally reached and Thomas returned to England.

While in France, Thomas had excommunicated the Bishops of London and Salisbury for their support of the king and remained steadfast in his refusal to absolve the bishops. Disputes again arose between them over similar issues and Henry, exasperated and enraged at Becket's intransigence, (which matched his own ) uttered those final, fatal words "Will no one rid me of this turbulent priest?".

Four knights, taking him at his word, proceeded to England. They rode to Canterbury where they confronted the Archbishop in the Cathedral calling him a traitor. According to accounts of the monk Gervase of Canterbury and eyewitness Edward Grim, they left their weapons under a tree outside the cathedral and hid their mail armour under cloaks before entering the cathedral to challenge Becket.

The knights informed Becket he was to go to Winchester to give an account of his actions, but Becket refused. It was not until Becket refused their demands to submit to the king's will that they retrieved their weapons and rushed back inside for the killing. They attempted to drag him out of the building. Thomas refused to leave and inviting martyrdom, declared himself as "No traitor but a priest of God." When one of the knights struck him on the head with his sword the others joined in and Thomas fell to the Cathedral floor having suffered fatal head injuries. 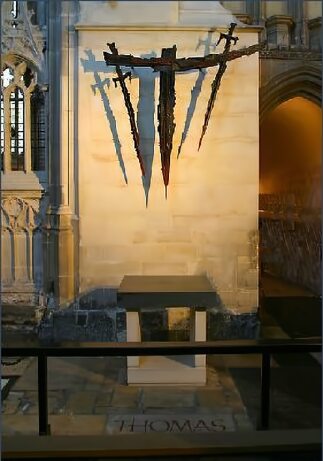 Several contemporary accounts of the murder have survived including that of the monk Edward Grim, who was wounded in the attack:-

'The wicked knight leapt suddenly upon him, cutting off the top of the crown which the unction of sacred chrism had dedicated to God. Next, he received a second blow on the head, but still, he stood firm and immovable. At the third blow he fell on his knees and elbows, offering himself a living sacrifice, and saying in a low voice, 'For the name of Jesus and the protection of the Church, I am ready to embrace death.' But the third knight inflicted a terrible wound as he lay prostrate. By this stroke, the crown of his head was separated from the head in such a way that the blood white with the brain, and the brain no less red from the blood, dyed the floor of the cathedral. The same clerk who had entered with the knights placed his foot on the neck of the holy priest and precious martyr, and, horrible to relate, scattered the brains and blood about the pavements, crying to the others, 'Let us away, knights; this fellow will arise no more.'

Becket's body lay on the pavement for some time, before midnight, Osbert, his chamberlain, entered the church and tore off a strip of his surplice to cover Thomas' mutilated head. The monks then gained courage and entered, collectig the scattered brains and placing the body on a bier in front of the high altar. They then cordoned off the site by placing benches around the site of the murder to keep off the crowd of onlookers, who were tearing off pieces of their garments and dipping them in Thomas' blood. Europe was a-buzz with the scandal, Henry's fury subsided into grief. England fell under threat of excommunication.

To weather the storm, the King did public penance for his part in the affair, walking barefoot into Canterbury Cathedral, where he allowed the monks to scourge him as a sign of contrite penance. Soon after, Becket was venerated as a martyr for the rights of the church, and on 21 February 1173, he was canonised by Pope Alexander III.

In 1220, during the reign of Henry's grandson, Henry III, Becket's remains were moved from his tomb to a splendid shrine, in the recently completed Trinity Chapel. The cult of Thomas Becket became one of the most popular and widespread devotions of the medieval period, with pilgrims from all over Europe journeying to visit his shrine at Canterbury. The shrine was richly gilded and decorated with precious jewels, including the Régale of France, a large ruby that was donated by Louis VII of France in 1179. A Venetian ambassador who visited the shrine in 1500 described it as covered with plates of pure gold, which was scarcely visible for the number of sapphires, diamonds, emeralds and rubies it was encrusted with.

The shrine of St. Thomas Becket was destroyed at the Dissolution of the Monasteries in 1538 on the orders of King Henry VIII. So rich where the accumulated offerings to the shrine that it required twenty-six carts to remove them and included three hundredweight of gold, the same amount of silver and many precious stones entered the coffers of Henry VIII. Henry had the regale of France, donated by Louis VII, taken from the shrine and incorporated into a huge thumb ring for his use. He gave orders that Becket's bones were to be destroyed. The site which the shrine once occupied is today marked by a lit candle.