William Longespée was the illegitimate son of the first Plantagenet king, Henry II and Ida de Tosny, a member of the Tosny (or Toesny) family. The epithet "Longespée", or Longsword is a reference to his great size and the huge weapons he wielded.

Ida de Tosny was a royal ward who became the mistress of King Henry II. The first evidence of contemporary information about Ida came to light in 1979 with the publication in the of two charters found in the Bradenstoke Priory Cartulary where he mentions "Comitissa Ida, mater mea" (Countess Ida, my mother), until then, it was assumed that Rosamund Clifford, a previous and more famous mistress of King Henry II's, was William's mother. Four years after William's birth, in 1181, Ida de Tosny was married to Roger Bigod, 2nd Earl of Norfolk, by whom she had a number of children.

King Henry II readily acknowledged William as his son and in 1188 granted him the honour of Appleby in Lincolnshire. Following the death of his father in 1189, his half brother King Richard I 'the Lionheart' succeeded to the throne, William began his successful military career by fighting alongside his half brother in Normandy.

King Richard arranged for the marriage of his half brother to the young heiress, Ela FitzPatrick, who was Countess of Salisbury in her own right, the daughter of William FitzPatrick, 2nd Earl of Salisbury and Eléonore de Vitré.

Richard died of a crossbow wound at Chalus, near Limoges in 1199 to be succeeded by his younger brother, King John, William held various offices during John's reign, sheriff of Wiltshire; lieutenant of Gascony; constable of Dover; and Lord Warden of the Cinque Ports; and later warden of the Welsh Marches. He was appointed sheriff of Cambridgeshire and Huntingdonshire about 1213. 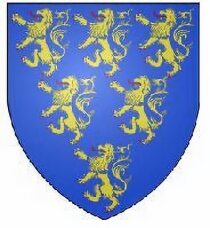 William took part in John's Welsh and Irish expeditions of 1210-1212. In 1213, Salisbury led a large fleet to Flanders, where he seized or destroyed a good part of a French invasion fleet anchored at or near Damme, then the port of Bruges, thus temporarily ending the French invasion threat.

In 1214, Salisbury was dispatched to aid John's nephew and ally, Otto IV of Germany, in his invasion of France. Salisbury commanded the right wing of Otto's army at their disastrous and decisive defeat in that year at the Battle of Bouvines, where he was taken prisoner by the French.

William returned to England to find the barons in revolt against John, he was one of the few who remained loyal to his unpopular half brother. In the civil war that broke out the year after the signing of the Magna Carta, William served as one of the leaders of the king's army in the south. Along with William Marshal he raised the siege of Lincoln, but after Prince Louis of France, son and heir of the John's arch enemy French King Philip II 'Augustus' landed in England in alliance with the rebels, Salisbury, assuming John's cause now lost, deserted him and went over to the rebels.

While retreating before this incursion, King John died of dysentry at Newark on the wild stormy night of 18th October, 1216, leaving England in a state of anarchy and civil war. His nine year old son Henry was crowned King Henry III of England at the Abbey Church of Gloucester with a circlet belonging to his mother Isabella of Angouleme, since his father had previously lost the royal treasure in the Wash.

After the defeat of Louis, Salisbury joined the cause of John's young son Henry. By 1218, the English and French signed the Treaty of Lambeth, which agreed that the French prince Louis would surrender his claims to the English throne.

William held an influential place in the government during the young king's minority and fought in Gascony to help secure the remnant of the once great Angevin Empire in France. He fell sick after campaigning in Gascony in 1226. Salisbury's ship was nearly lost in a storm while returning to England, and he spent some months in refuge at a monastery on the French island of Ré.

William Longespée died on 7 March 1226 at Salisbury Castle soon after his return to England. Roger of Wendover alleged that he had been poisoned by Hubert de Burgh. He was buried at Salisbury Cathedral of which he had been a benefactor. His eldest son William succeeded to the title Earl of Salisbury, His widow, Ela, Countess of Salisbury lived on until 1261 and was buried in Lacock Abbey.

The tomb of William Longespée was opened in 1791, inside his skull was found the remains of a rat which carried traces of arsenic. The rat is now on display at the Salisbury and South Wiltshire Museum.


The descendants of William Longespée and Ela FitzPatrick

(2) Richard Longespée, a canon of Salisbury.