Geoffrey Plantagenet was the illegitimate son of King Henry II, the first of the Plantagenet Kings. The identity of Geoffrey's mother is not known with certainty, but she is thought to have been a woman named Ykenai. Geoffrey is known to have had a maternal half-brother called Peter.

Geoffrey was born before his father succeeded to the throne of England in 1154, shortly after Henry's accession to the throne, Ykenai brought her three-year-old son to court to present him to his father, the king acknowledged the child and took him into the royal household to be brought up with his legitimate children. What Henry's wife, Eleanor of Aquitaine's opinion was on the matter has gone unrecorded, but she can hardly have been pleased by this clear evidence of Henry's unfaithfulness even in the early days of their marriage.

Henry II decided that Geoffrey should pursue a career in the church and he had been appointed Archdeacon of Lincoln by September 1171 and in April 1173 the twenty-one-year-old Geoffrey was elected as Bishop of Lincoln. In 1180 Geoffrey taxed his diocese so heavily that his actions incurred a stern rebuke from his father. In 1181 Pope Lucius III, concerned that Geoffrey had still not been ordained or consecrated, demanded that the bishop elect's position be regularised, either through consecration as bishop or through his resignation, accordingly Geoffrey resigned the see of Lincoln on 6 January 1182, rather than be ordained as the Pope had ordered. The king had named him Chancellor of England in 1181 after Geoffrey indicated he was going to resign his bishopric.

When his half brother Richard, Duke of Aquitaine, rebelled against his father in 1187, in alliance with King Philip II 'Augustus' of France, Geoffrey fought by his father's side and was with him when he was driven out of Le Mans by Richard's forces in 1189. He was the only one of his sons to be with the ailing king during his final days, "You are my true son," the dying king uttered bitterly, "the others, they are the bastards". Henry, on his deathbed, expressed a desire that Geoffrey be made either Archbishop of York or Bishop of Winchester. After Henry's death the faithful Geoffrey escorted his body to Fontevrault Abbey for burial. 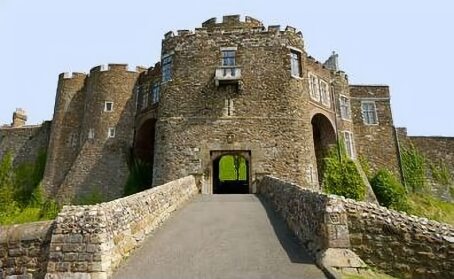 While at Fontevrault Abbey, Geoffrey met his half brother Richard, now King Richard I, who asked him to resign the Chancellorship of England, which he complied with. To honour his father's dying wish, Richard nominated Geoffrey as archbishop of York and on 10 August 1189, he was duly elected. Geoffrey at first declined the offer, stating that he was fonder of clogs and hawks than of books and priests. Richard also required Geoffrey and his brother John to swear an oath that they would remain outside England for three years when Richard was expected to be out of the country on his planned crusade. The king subsequently released them from the oath.

Geoffrey was ordained priest and consecrated as Archbishop of York on 18 August 1191, at Tours in France, by Bartholomew, the Archbishop of Tours. In September 1191 he attempted to go to York, but was met at Dover by agents of the chancellor William Longchamp, Geoffrey sought refuge in the priory of St. Martin in Dover but was sacrilegiously dragged from sanctuary and imprisoned in Dover Castle. Following a public outcry, after a few days archbishop Geoffrey was released, Longchamp was excommunicated and removed from his position as chancellor, and Hugh, Bishop of Lincoln, excommunicated all those who had dared to drag Geoffrey from sanctuary. Geoffrey was finally enthroned at York on 1 November 1191.

Geoffrey was a man of talent and ambition but was possessed of a genius for tactlessness, he had a fiery temper and was incapable of compromise. The new archbishop became embroiled in disputes with the canons of York and others of the clergy. The only spiritual function of his office that the new Archbishop seemed to apply himself to with vigour was that of excommunicating those whom he quarrelled with, and they were many. 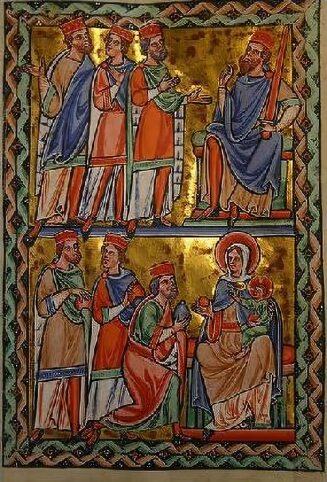 The canons of York were soon to discover that their election of Geoffrey as archbishop had been an imprudent one. The new archbishop, whose "tumultuous nature" became more apparent as he grew older, inherited in full measure the stormy Plantagenet character.

Soon after he was appointed Archbishop, Geoffrey arrived late for the Vespers of the Vigil of the Epiphany and was annoyed to discover the dean had begun the service in his absence and promptly ordered it to begin again. The irritated dean ordered the choir to continue, when they halted in obedience to Geoffrey, the treasurer responded by having all the lights extinguished. The furious Geoffrey had the cathedral placed under interdict. The situation went from bad to worse, the following day at celebrations for the Epiphany the ill-feeling was renewed, when instead of the apology he had ardently expected, the archbishop was abused in public by the dean and treasurer to which he reacted by excommunicating them both and no service could be held due to Geoffrey's interdict.

Geoffrey soon became involved in a quarrel with Hugh du Puiset, the dispute between the pair continued for years and resulted in many appeals to the Pope and to King Richard, which culminated in the infuriated Geoffrey excommunicating Puiset. Queen Eleanor and Hubert Walter attempted to settle the dispute in March 1192 which failed when the intransigent Geoffrey demanded a pledge of obedience from Puiset, who in turn required an admission from Geoffrey that his ex-communication had not been just. The issue was finally settled by the Pope in October 1192.

In the few years since his appointment as archbishop of York, Geoffrey seems to have alienated nearly everyone he came into contact with. He caused further offence by having his episcopal cross carried before him in the diocese of Canterbury, by which he implied that his diocese of York was superior or on a level par with that of Canterbury. He seems to have made himself so unpopular in his diocese that allegations of simony, extortion, and neglect of his duties were brought against him, to which he responded characteristically by excommunicating his accusers on more than one occasion, and locked the canons out of church. In 1193 the hot-headed archbishop entered into a further quarrel with Hubert Walter over the primacy of England, which Canterbury claimed and Geoffrey disputed.

When the Pope summoned Geoffrey to Rome, he characteristically refused to comply and was accordingly suspended from his office. Geoffrey turned to King Richard for help, asking him to intercede with the Pope, the new King listened sympathetically to his half-brother's complaints until Geoffrey went on to rebuke the King for the immoral life he had led, warning him he ought to mend his ways. Richard, exasperated, could stand no more, he flew into a violent rage, confiscated his estates and ordered him from his presence.

On the death of King Richard in 1199, his brother John succeeded to the throne. King John restored Geoffrey to his archepiscopal estates, which heralded the resignation of several Geoffrey's opponents, and for a short period peace prevailed in York. Geoffrey was frequently in his half brother John's company in 1199, and the two initially appear to have shared a good relationship.

In October 1200, however, Geoffrey stoutly opposed his half-brother in refusing to allow the collection of a tax on land on his property, and in retaliation, John confiscated his estates. Geoffrey proceeded to excommunicate the new sheriff of Yorkshire, James of Poterne, who had ravaged his lands. In November 1200, Geoffrey and John met at the funeral of Hugh of Lincoln at which they were reconciled and his confiscated lands restored. Geoffrey however, still stubbornly refused to allow the collection of the tax on his lands, leading to the reconciliation between the brothers being short-lived.

In January 1201, King John made peace with his irascible and overbearing half brother, it again did not last as, his own worst enemy, Geoffrey remained immovable on the issue of allowing the collection of the tax. The exasperated John renewed the demand for the payment for the office of sheriff due from Richard's reign, which forced Geoffrey to rescind his ex-communication and offer another payment, peace was finally reached on the matter in May of 1201.

The peace, however, was fated not to last, further disputes regarding appointments in York arose, Geoffrey acquired the support of Pope Innocent which enabled him to secure the appointment of some of his own candidates. He submitted to King John in 1206 and his lands were returned to him. But in 1207 he incurred the king's wrath when he led the clergy in their refusal to pay taxation and was forced into exile.

Before going into exile the archbishop angrily excommunicated anyone who attempted to collect the tax in his archdiocese thus bringing to an end his stormy career in England. John, who had himself inherited his fair share of the famous Angevin temper, furiously confiscated Geoffrey's estates in retaliation.

Geoffrey was never to return to England, he lived on for a further five years an embittered an uncompromising figure at the Priory of Sant Michel at Grandmont near Rouen, where he lived during his exile. The monastery had been a favourite of Henry II.

Geoffrey died, still in exile, at Grandmont in Normandy on 12 December 1212 and was buried in the monastic church there. His tomb was still survived in 1767 when its inscription was recorded by an antiquary.