Edmund of Langley, Duke of York and Earl of Cambridge was born on 5 June 1341, at the Royal Palace of Kings Langley in Hertfordshire. He was the fourth surviving son of King Edward III and Philippa of Hainault, daughter of William III, 'the Good' Count of Holland and Hainaut, and Joan of Valois.

Edmund was granted the Earl of Surrey's lands north of the Trent, which lay mostly in Yorkshire, on the death of the latter. In 1359 he accompanied his father the King on an unsuccessful military expedition to France, at the age of twenty-one, King Edward created his son Earl of Cambridge. 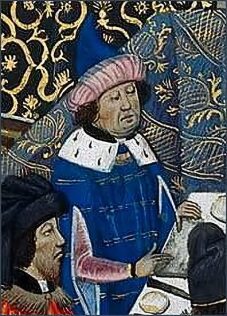 Edmund participated in several military expeditions in France in the 1370s, In 1369 he served with John Hastings, earl of Pembroke, on campaign in Brittany and Angoulême. The next year he saw action in France again when he joined Pembroke to relieve the fortress of Belle Perche. He then accompanied his brother, Edward, the Black Prince on the campaign and was present at the siege and merciless sack of Limoges.

Edmund married Isabella of Castile (c. 1355 - 23 December 1392), the youngest of the three daughters of King Pedro 'the Cruel' of Castile by his mistress, María de Padilla on 11 July 1372. His brother, John of Gaunt, 1st Duke of Lancaster, had married Isabella's elder sister, Constanza. The marriage of Edmund and Isabella produced three children:-

(2) Constance of York (c.1374 - 28 November 1416), married Thomas le Despenser, 1st Earl of Gloucester, by whom she had a son, Richard, and two daughters, Elizabeth and Isabel. After the death of her husband she was either betrothed to or lived as the mistress of Edmund Holland, 4th Earl of Kent, and had a daughter by him, Eleanor Holland (died c. 1459).

(3) Richard of Conisburgh, 3rd Earl of Cambridge (1375 - 5 August 1415), married Anne Mortimer, and had two children, Richard Duke of York and Isabella. Edmund and Isabella were an ill-matched pair, she indulged in an affair with King Richard II's half-brother, John Holland, 1st Duke of Exeter (d.1400), Isabella left behind a tarnished reputation, her loose morals being commented on by the chronicler Thomas Walsingham.

In 1375 Edmund sailed with Edmund Mortimer, Earl of March, to relieve Brest, an expedition that met with some initial success before a truce was declared. He was appointed Constable of Dover Castle and Warden of the Cinque Ports on 12 June 1376 and held that office until 1381. In 1381 he commanded an expedition to aid Ferdinand, King of Portugal, in his struggle with John I, King of Castile; but after a period of inaction, Edmund was forced to return to England with his troops as Ferdinand had concluded an independent peace with John of Castile.

Isabella of Castille died 23 December 1392, at about the age of 37, she was buried at the church of the mendicant friars at Kings Langley. After her death, Edmund married for a second time to Joan Holland, sister and co-heir of Edmund Holland, 4th Earl of Kent (9 January 1382 - 15 September 1408), with whom his daughter, Constance, had lived as his mistress. Joan was the daughter of Thomas Holland, 2nd Earl of Kent, a son of Joan 'Fair Maid of Kent', by her first husband, Thomas Holland of Upholland in Lancashire.

Edmund acted as Keeper of the Realm on several occasions during the reign of his nephew Richard II, he accompanied Richard on his march into Scotland and on their return, was created Duke of York by his nephew in 1385.

In late June the exiled Henry Bolingbroke, the son of Edmund's older brother, John of Gaunt, landed at Bridlington in Yorkshire. Although the Duke of York, who was regent in Richard's absence at the time, raised an army to oppose Bolingbroke, on recognizing Richard's cause was lost he deserted his nephew and decided instead to join Bolingbroke, for which he received ample rewards. Bolingbroke overthrew Richard II to be crowned King Henry IV.

Tomb of Edmund of Langley, 1st Duke of York 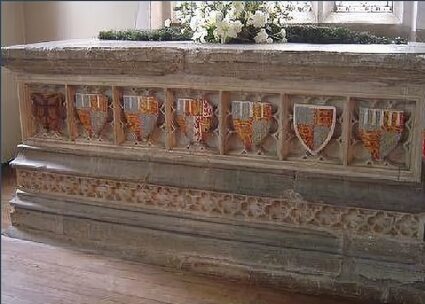 After the accession of the House of Lancaster, Edmund of Langley absented himself from Court and remained mostly at his palace in Kings Langley, where he died on 1 August 1402 and was buried in the church of the mendicant friars there, near the tomb of his first wife Isabel of Castille. The tomb of alabaster and black marble, richly adorned with coats of arms, was, at the dissolution of Monasteries, removed into the northeast corner of the chancel of the parish church of Langley.

His dukedom was inherited by his eldest son, Edward Plantagenet, who was killed at the Battle of Agincourt on 25 October 1415, to be succeeded as Duke of York by Edmund's grandson, Richard Plantagenet, the only son of his second son Richard Earl of Cambridge and Anne Mortimer. Richard of Conisburgh, Earl of Cambridge had been executed on the orders of Henry V on 5 August 1415, for his part in the Southampton Plot to place his brother-in-law, Edmund Mortimer, Earl of March on the throne.

On November 22, 1877, Professor George Rolleston, carried out an examination of Edmund of Langley's skeleton exhumed from his tomb at All Saint's:-

"I examined three skeletons at King's Langley. Of these, one was the skeleton of a powerful man, considerably past the middle period of life; a second was the skeleton of a woman, as far as I could judge, between thirty-five and forty years of age; the third had belonged to a younger woman, whose age, however, could not have been very far from thirty. The bones of the first two had got somewhat intermingled; those of the third had been kept safely apart from intermixture in a leaden coffin.

The skull belonging to the male skeleton had a sloping forehead. The chin and lower jaw were powerfully developed. The front teeth were small in size and crammed together, and many of the back teeth lost. Still, the retention of the front teeth and the good development of the lower jaw and chin, coupled with the length and breadth of the facial region, must have given a commanding expression to the old man who owned this skull.

The age was somewhere between fifty-eight and sixty-five. The crippled condition of his later years must have formed a touching contrast to the strength and vigour which he certainly possessed. In the lower jaw, three molars had been lost during life, two on one side and one on the other, and one pre-molar was carious. A piece of coarse textile fabric, with some hair of a greyish-red colour adhering to it, was found with the skull. He was from 5' 5" to 5' 7" in height."

Richard I the Lionheart
Edward I
Richard III
Edward II
Next Edward, Duke of York