The remarkable and dramatic discovery in 2013 of the remains of Richard III, England's last Plantagenet king, at Leicester, captured world attention. To establish a centre that would relate the story of the incredible search for the king's burial site, Leicester City Council purchased the former Alderman Newton's School, situated adjacent to the site of the medieval Grey Friars Priory where the remains were unearthed. 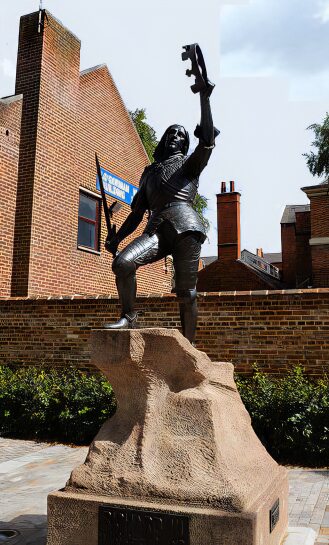 The 4 million pound King Richard lll Visitor Centre opened to the public on 26 July, 2014 and is situated near to Leicester Cathedral where King Richard was re-interred in March 2015.

The exhibition provides visitors with an opportunity to learn more about King Richard III's life, his short reign and his death in at the Battle of Bosworth in 1485 and to gain an understanding of the events which led to his hasty burial and eventual rediscovery over 500 years later.

Part of the Exhibits 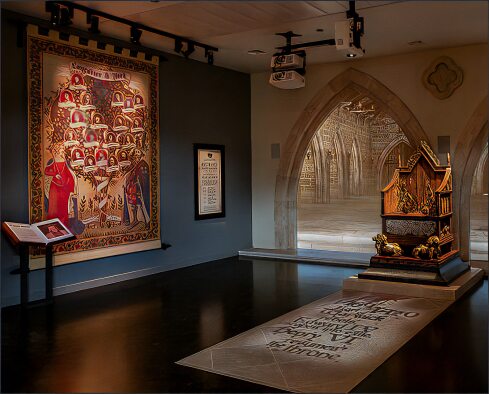 It relates the story one of the greatest archaeological detective stories ever told, of the Greyfriars Project, which attracted extraordinary global media attention, unearthed the remains of the medieval church, where Richard is recorded as being buried. It also features the first-ever genome sequencing of ancient DNA.

Visitors can see the exact place where Richard's remains were buried, now transformed into a glass-floored contemplative space for visitors. The new centre covers two floors of the former grammar school and is divided into three sections, Dynasty, Death and Discovery. The Visitor Centre is entered via a 'throne room' where a film on the screen behind the throne tells the story of Richard III.

Dynasty is situated on the ground floor of the Visitor Centre and relates the history of Richard's life and times in a country racked by decades of tumult in the civil conflict now referred to as the Wars Of The Roses between the rival Houses of York and Lancaster, which formed and moulded the young Richard's character. The death of his father, Richard Plantagenet, Duke of York in battle at Wakefield and the rise to power of his brother Edward IV who took the throne from Henry VI after defeating the Lancastrians at the bloody Battle of Towton fought on Palm Sunday, 29 March 1461 and his marriage to his cousin Anne Neville, daughter of the powerful, Richard Earl of Warwick, known to history as 'Warwick the Kingmaker'.

Through both written and detailed illustrated information, visitors can discover the story behind Richard's rise to power as the last king of the house of Plantagenet and the reforms he embarked upon during his short reign.

Death provides the visitor with further information covering his defeat by Henry Tudor, Earl of Richmond at the Battle of Bosworth in August 1485 and how the betrayal of the Stanleys led to his brutal death in the thick of battle while defending his crown. How Lord Stanley retrieved England's crown, which Richard had inadvisedly worn throughout the battle, from under a hawthorn bush and placed it on the head of Henry Tudor. How the body of King Richard III was treated with much indignity. Trussed naked over a horse and besmirched with mud, it was borne in parade to Leicester where Richard III was hastily buried at the Franciscan Greyfriars Priory.

Part of the Exhibits 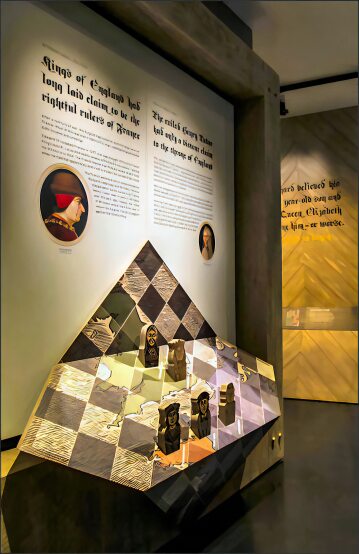 Discovery located on the first floor, with narratives from the Ricard III Society and the University of Leicester archaeologists cover the story of the research, archaeology, science and painstaking analysis that led to the discovery and identification of the kings remains through mitochondrial DNA sampling to link the skeleton to descendants of Richard III's sister, Anne of York and carbon dating of the bones.

Examination of the skeleton dispelled the myth spun by Tudor propaganda that Richard was a deformed hunchback, although the skeleton's curved spine does reveal that the king suffered from scoliosis, but did not have a withered arm as he is depicted in some characterisations. It also revealed he was killed by one of two fatal injuries to the skull, one possibly from a sword and one possibly from a halberd.

The final stop, back on the ground floor, is a glazed extension over the King's former burial site.

The displays at the centre also explain the events that cast a black shadow over Richard's controversial reign. How his brother Edward IV's young sons, Edward V and Richard Duke of York, the so-called 'Princes in the Tower' whom he declared illegitimate to ensure his claim the crown, subsequently vanished into the depths of the Tower of London, never to be seen again. Intriguingly, however, it leaves open the much-debated question of whether the two boys were killed on the orders of their Uncle Richard.

The Richard III Visitor Centre is situated at 4a St Martin's, is in the heart of Leicester city centre, next to Leicester Cathedral. Long-stay car parks are available at St Nicholas Circle NCP and the Highcross Shopping Centre.