From the fury of the northmen O Lord deliver us

The much-repeated Anglo-Saxon prayer " From the fury of the northmen O Lord deliver us" evokes the terror a Viking landing inspired in the Anglo-Saxon population. The Anglo-Saxon Chronicle ruefully records fearful omens in the year 793, lightning, high winds, flying dragons, famine, "and a little after that, in the same year, on 8 June, the ravages of the heathen men miserably destroyed God's church on Lindisfarne with plunder and slaughter."

By 820, the Irish Annals of Ulster tell of similar terrifying occurrences for the year 820: "The sea spewed forth floods of foreigners over Erin, so that no haven, no landing-place, no stronghold, no fort, no castle might be found, but it was submerged by waves of Vikings and pirates." 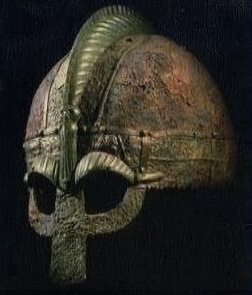 Norse warriors from Denmark, Norway and Sweden, they were skilled sailors with advanced methods of shipbuilding. The Vikings (from the Old Norse viking) terrorised and later settled large areas of Europe from the late 8th to the 11th century. In their longships, or dragon prows, they travelled as far east as Constantinople and the Volga River in Russia. In around 980, Erik the Red founded a settlement on Greenland. Viking legend relates that Erik the Red's son, Leif Eriksson, succeeded in reaching the North American continent, calling his settlement Vinland, or the "land of the grapes." Viking weapons and tools have been uncovered in Newfoundland, Canada.

The Anglo-Saxon Chronicle records that Norwegian Vikings sailed into Portland Bay, Dorset in 787. A royal official mistook them for merchants and was killed whilst attempting to request that they accompany him to the king's manor to pay a trading tax on the goods they were bringing into England.

Further raids followed, on 8th June 8, 793, the monastery on the island of Lindisfarne was attacked, its occupants murdered and the gold, jewellery and relics taken. Monasteries were a favoured target due to the riches which were contained in them. Jarrow was invaded in 794 and Iona in 795, 802 and 806. After repeated raids by the Norsemen, the monks of Lindisfarne fled the monastery in AD 875, taking the venerated relics of Saint Cuthbert with them for safekeeping. 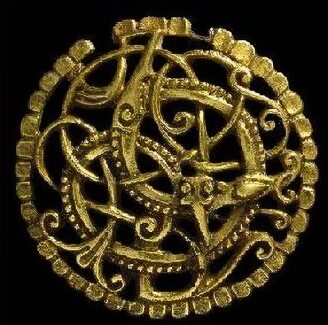 In 835 a fleet of Viking longboats sailed up the Thames estuary and ravaged the Isle of Sheppey. In 850 a further army, failing to follow the usual pattern of returning home over winter, encamped on the Isle of Thanet in the Thames estuary. The Kentish people offered payment known as Danegeld to hold off the ferocious attacks.

The Viking chief Ragnar Lodbrok, a legendary Norse hero, was captured by Aella of Northumbria and thrown alive into a pit of adders. It is said that when the four sons of Ragnar heard the news of how their father had met his death, Hvitserk, who was playing chess gripped the piece so hard that blood issued from his fingernails. Bjorn gripped his spear so tightly that he left an impression in it and Sigurd who was trimming his nails cut straight through to the bone. Ragnar's eldest son, known as Ivar the Boneless, was bent on vengeance, and later met Aella in battle, capturing him and sentenced him to a painful death in accordance with the custom of Rista Blodorn (Blood eagle) which entailed cutting the ribs of the victim out and removing the lungs, spreading them over the body.

A large army of Danish Vikings landed on English shores in 865, led by Ivar, Halfdan and Guthrum. Landing in East Anglia, they marched into Northumbria, capturing York, known to them as Jorvik, which was to become an area of large Viking settlement. They were valiantly opposed by the Saxon king Alfred of Wessex and his successors of the House of Wessex.

At first depressing series of defeats at the hands of the Vikings continued unabated and Alfred was forced into a strategy of buying them off. As a result, they ceased their attacks and for five years, peace reigned in Wessex. This peace was not likely to last for any considerable length of time and was at best a temporary measure. The Viking army, after taking Mercia, divided. One part, under Halfdan, marched north to Yorkshire where they settled permanently. The other, under Guthrum, launched another attack on Wessex in 875. They withdrew again in 877 and began to colonise Mercia. Wessex was savagely attacked for the third time in 878 and Alfred was driven into hiding at Athelney in the Somerset marshes, he remained there with his ally, Athelnoth, Ealdorman of Somerset and others of his thegns, and biding his time.

In 886, Alfred garnered his resources and managed to retake the city of London, but Viking raids continued. At the battle of Ethendun in 878, Saxon forces soundly defeated the Vikings lead by Guthrum and peace was concluded by the terms of the Treaty of Wedmore. Guthrum converted to Christianity with Alfred standing as godfather to his erstwhile enemy. Alfred accepted the Danish colonisation of much of England. A line was drawn which ran north-westwards from London to Chester and Guthrum defining an area, north of this line which was termed the Danelaw.

A Viking first occupied the English throne in 1013, when Sweyn Forkbeard succeeded in wrenching the crown from the feeble grip of Alfred's descendant, the ineffectual Ethelred the Redeless. Two generations of his successors were to reign over England after him, before the Saxon line of kings was restored.

A Viking ship from Gokstad 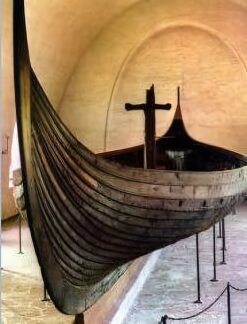 The last battle with a Viking army took place at Stamford Bridge on 25th September 1066, when Tostig, the embittered brother of the Saxon king, Harold II, bent on revenge, allied himself with Harold Hardrada, King of Norway, and invaded England with a formidable Norwegian fleet that landed at Riccall, near York. On hearing of the news, King Harold gathered an army and marched to meet them at Stamford Bridge in Yorkshire.

The King attempted a compromise with his brother and sent a message offering to restore his Earldom, to which Tostig responded haughtily by asking what Harold was prepared to give Hardrada, "Seven feet of land for a grave" was Harold's defiant reply. Tostig refused to abandon his ally.

The battle commenced when the Saxons attacked the Norwegian shield wall, which despite repeated attempts, they failed to penetrate. The Saxons fell back and the Norwegians, believing them to be in retreat, broke ranks and pursued them, at which the Saxons wheeled round and attacked. Harold Hardrada was killed by an arrow in his neck, his fallen banner, Land-Ravager was seized by Tostig, who assumed command of the Norwegian army. He fell into the frantic conflict shortly after, the Norwegians fought with determination and courage until dusk but victory went to the Saxons. The following day, Olav, the son of Hardrada gave himself up to the English, along with the Earl of Orkney. In a merciful gesture, Harold allowed him to return home, with all the survivors, on a promise they would never invade England again.

Modern genetic research reveals that a genetic inheritance from the Vikings remains in some parts of the population of Britain. Geneticists have discovered that in England, the area around Penrith in Cumbria reveals clear evidence of Norwegian settlement, and that the population in parts of northwest England carries up to 50 per cent male Norse origins. It also confirms that the Vikings settled in large numbers in the Shetland and Orkney Islands and the far north of the Scottish mainland. The samples used in the study was compared with DNA taken from people in Scandinavia.

Many words which derive their origins from the Norse language have been assimilated into English and have survived to the present day. These include the words knife, berserk, ransack, club, window, lathe, plough and axle.