The Battle of Otterburn

Following the end of a truce with the English, Scottish forces began raiding across the border in the summer of 1388.

The Battle of Otterburn took place on 5 August 1388, according to Scottish sources, which is contradicted by a date of 19 August as recorded in English sources.

Arms of James, Earl of Douglas 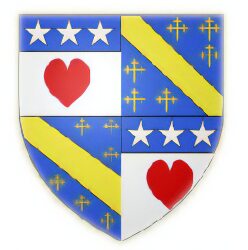 Intent on taking advantage of divisions between Lord Neville and Henry Percy, 1st Earl of Northumberland, James, 2nd Earl of Douglas led a Scottish force of around 6,000 men across the border into Northumbria, burning and pillaging as they progressed, the Scots advanced on Newcastle.

The Arms of Harry Hotspur 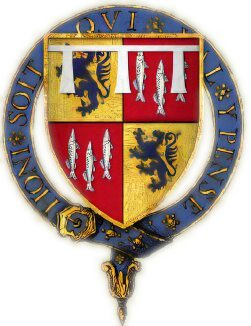 The Earl of Northumberland sent his sons Sir Ralph Percy and Harry Hotspur, so nicknamed for his volatile temperament and impetuous nature, to oppose them with around 8,000 men, while Northumberland himself remained at Alnwick to cut off the Scots retreat. Hotspur decided to depart immediately, rather than await the arrival of the Bishop of Durham who was advancing north with reinforcements.

Arriving at the city, the Scots attacked its western defences and skirmished with the garrison. The Earl of Douglas and Harry Hotspur met in hand to hand combat by the walls of Newcastle, during which, the silk pennon from Hotspur's lance was captured. around the walls of Newcastle, the silk pennon on Percy's lance was captured by Douglas. Hotspur vowed to recapture the pennon.

Douglas then retreated, destroying the castle at Ponteland, with Hotspur in pursuit. On the 19th August the Scots, who had made an unsuccessful attempt to take the Otterburn Castle, were encamped about a mile to the west of Otterburn in the Valley of the Rede, at a council of war, Douglas, against the advice of many of his captains, decided to halt at Otterburn to await Hotspur.

Arriving at Otterburn in the early evening, Hotspur was unwilling to wait until the morning and launched a surprise attack on the Scots encampment, but first encountered the Earl's serving men, providing the bulk of the Scots forces time to muster and attack them on their flank.

Douglas armed himself quickly and led the left-wing, while John Dunbar, Earl of Moray commanded the right, Hotspur's men having ridden up from Newcastle were tired and disorganized as they made their way onto the field, the rash and high spirited Hotspur was overconfident, and launched his attack on the Scots before the rest of his force had arrived at Otterburn. 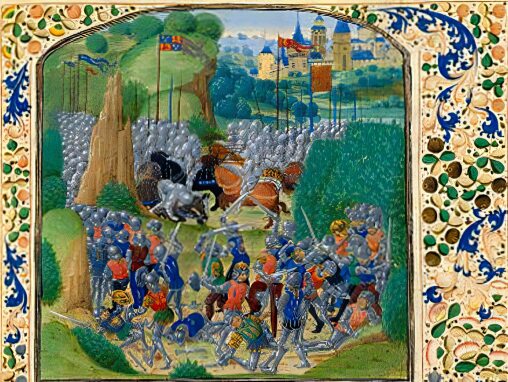 The battle continued into the moonlit night, due to the darkness, Hotspur was unable to use his archers and the combatants were locked in grim hand-to-hand fighting. Douglas was wounded in the neck and slain on the field, his death went unnoticed until much later, Harry Hotspur and his brother Ralph were both captured, Hotspur being taken by Sir John Montgomery. Estimates number around 500 Scots were dead or wounded as well as 200 captured. English losses amounted to between 1,000 and 1,500.

The surviving English force retreated to Newcastle and on recovering the body of the slain Douglas, which was found the following morning stripped of armour, the Scots resumed their march home. Douglas' body was interred at Melrose Abbey. After being held prisoner in Scotland, Hotspur was eventually ransomed with King Richard II and Parliament both contributing funds.

The calamity that befell our countrymen on this occasion of Otterburn was due in the first place to the heady spirit and excessive boldness of Sir Henry Percy, which caused our troops to go into battle in the disorder induced by haste: and in the second place because the darkness played such tricks on the English that when they aimed a careless blow at a Scotsman, owing to the chorus of voices speaking the same language, it was an Englishman that they cut down.

Several ballads were composed the including 'The Battle of Otterburn' and 'The Ballad of Chevy Chase'. Chevy Chase rather mangles the history of the battle and maybe confusing other conflicts at around the same time but it is still cited as one of the best of the ancient ballads.