The Battle of Mount Badon

The Dark Age Battle of Mount Badon, known to the Welsh as Mynydd Baddon, was fought between the Britons and an invading force of Anglo-Saxons sometime between 490 and 517 AD. The Saxons were defeated and forced to come to terms with the Celts, establishing a period of peace. Archaeological evidence confirms a sudden cessation of Saxon advances in the south until the mid-sixth century. 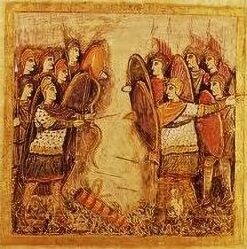 Though a major decisive battle, there is uncertainty regarding Badon's date and the location where it was fought. The Historia Brittonum, a history of the indigenous Brythonic people, attributed to Nennius, states that the legendary King Arthur led the British forces at the battle, however the only nearly-contemporary account of Badon, written by Gildas, makes no mention of Arthur at the battle 'From then on victory went now to our countrymen, now to their enemies. This lasted right up to the siege of Badon Hill.'

Mount Badon is also mentioned in the Welsh Annales Cambriae, which list the battle as occurring in 516:'The Battle of Badon in which Arthur carried the Cross of Our Lord Jesus Christ on his shoulders for three days and three nights, and the British were victorious'

Curiously, the Anglo-Saxon Chronicle does not mention the battle at all this battle, but does seem to document a gap of almost 70 years between two major Anglo-Saxon leaders (bretwaldas) in the fifth and sixth centuries.

There are several candidates for the site of the battle:- Liddington Castle otherwise known as Eorthburg is one of the earliest hill forts in Britain and is situated above the village of Badbury, north of Badbury rises the steep hill of Baydon, on the slopes of which the scars and ditches of ancient fortifications still remain. 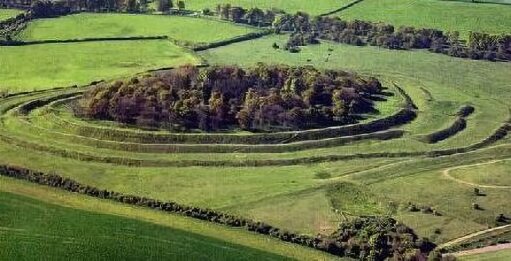 Known to the Anglo-Saxons as Baddan byrig, Badbury lies near Swindon in the Marlborough Downs commanding the east/west transit along the Ridgeway track route thus preventing further expansion by the Saxons in the Thames Valley region and protecting the Avon and Severn valleys. There is, however, no archaeological evidence to indicate activity during the time of the Battle of Mount Badon.

Badbury Rings an Iron Age hill fort in east Dorset, is also one of three sites regularly advanced as the location of the battle. An archaeological survey completed in 1998 unearthed pottery dated to the late Iron Age.

The identification of Badbury Rings with Battle of Mount Badon was reported in the ninteenth century by John Hutchins. Local historian Roy Carr has suggested that the Saxons were held off from crossing Bokerley Dyke, by the threat of an army in the west, perhaps stationed at Badbury Rings.

Mynydd Baedan near Bridgend in South Wales. Mynydd is the Welsh word for mountain, and baedan is cognate either with baedd, a boar, or with baeddu, to thump. Two archaeologists claim to have traced King Athrwys's (Arthur's) grave near the altar of the small ruined Church of St Peter at Mynydd Baedan. 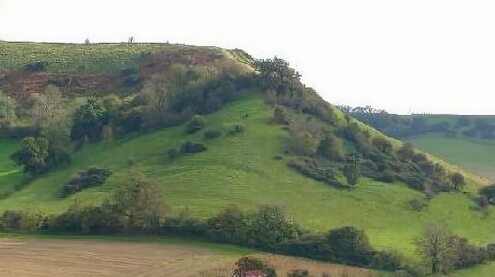 Solsbury Hill, situated near Bath, Solsbury Hill was suggested by Geoffrey of Monmouth as the site of the battle. A study of the origins of place names and the associated etymology favours Bath as Badon.

Bath was known to the Saxons as Baþon and Baðon. In the Anglo-Saxon Chronicle entry for the Saxon capture of Bath in 577, it is referred to Bathanceaster. There are various hills not far from Bath, and any of them might have been the location of the battle. The word "bath" is Germanic, but "Badon" maybe a Celtic name. Bath's Roman name was Aquae Sulis.

Cadbury Castle Hill Fort in Somerset, ringed by four terraced earthworks ditches and banks and associated with the legends of King Arthur, has also been suggested as a possible site of the battle. Around 500 BC an elaborate system of defences was erected atop the hill, including upright wooden barricades. Excavation at and around the site have discovered artefacts of the Iron Age and the Roman and Saxon eras.

The antiquarian writer John Leland first referred to Cadbury as the site of King Arthur's castle of Camelot. Modern archaeological excavations have revealed evidence of post-Roman/early medieval occupation on the hilltop. A substantial Great Hall measuring 20 x 10 metres was discovered and it was further revealed that the innermost Iron Age defences had been refortified, providing a defended site double the size of any other known fort of the period. It therefore does seems probable that it was the chief stronghold of a major Brythonic ruler. The castle stands close to the River Cam and the villages of West Camel and Queen Camel.