One of the distinctive features of the Roman occupation of Britain was the establishment of towns as administrative and commercial centres. The Iron Age Britain of the Celts was previously marked by small scattered farming communities and hillforts. The Roman settlement of Verulamium, one of the first towns to be founded after the Roman conquest, was situated to the southwest of the modern town of St Albans in Hertfordshire and around 20 miles to the north-west of London. 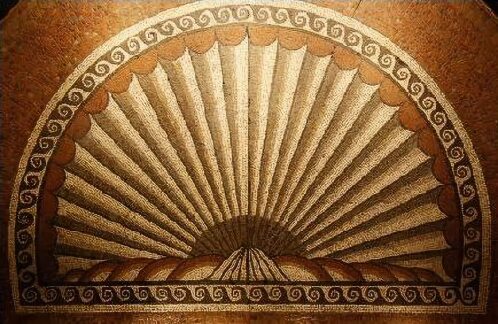 Prior to the Roman conquest of Britain, the Catuvellauni tribe had a settlement on the site known as Verlamion, during Julius Caesar's second invasion of Britain in 54 B.C., he was opposed by the Catuvellauni tribe under their leader Cassivellaunus. The Catuvellauni finally surrendered at their stronghold, near Wheathampstead, after which Caesar returned to Gaul to deal with an uprising there. Due to these events, the Catuvellauni moved their capital a few miles away, known as "Verlamiom", which translates as "the settlement above the marshes", the town was established by the Catuvellauni chief, Tasciovanus, both he and his son Cunobeline had coins minted there. It would then have consisted of a settlement of Iron Age roundhouses with thatched roofs surrounded by a ditch and an earth rampart topped with a wooden palisade.

Roman Verulamium was built on the banks of the River Ver and was connected to other major towns of Roman Britain by roads such as Watling Street, which ran from Londinium (London), through Verulamium and north west to Deva (Chester). In circa 50 AD Verulamium was given the rank of municipium, meaning its citizens possessed 'Latin Rights', a lesser citizenship status than those of a colonia. 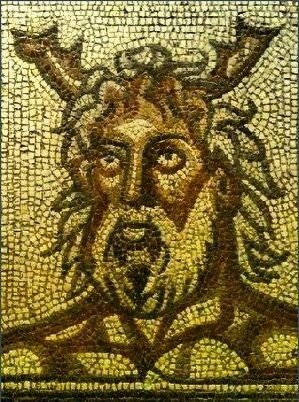 In common with Colchester and London, Verulamium was sacked and burnt to the ground during the revolt of Boudica and the Iceni tribe in AD 61 and those inhabitants who did not leave were brutally slaughtered. A black layer of ash has been uncovered by archaeologists, this archaeological layer is known as Boudicca's Destruction Horizon, and contains burnt artefacts from the period.

In the years which followed Boudica's revolt, Verulamium began to be rebuilt under Vespasian, to whom the new forum was dedicated in 79 AD. It expanded during and after the reign of Emperor Nero. Verulamium steadily increased in size until by the early third century it covered an area of about 125 acres (0.51 km2), and was protected by a deep ditch and wall. By the fourth century, Verulamium was the third-largest city of Roman Britain after Londinium and Corinium (Cirencester).

It is the location of the martyrdom of the first British martyr saint, St. Alban, who was a Romano-British citizen converted by the priest Amphibalus who was beheaded outside the gates of Verulamium on the orders of the Roman Emperor Diocletian for sheltering a Christian priest and refusing to make an offering to a pagan idol.

During the religious persecution of Christians under Diocletian, Alban gave shelter to the priest Amphibalus in his home. He was so impressed with the piety of the priest that he converted to Christianity. On learning of Amphibalus' location, the Romans came to seize him whereupon Alban presented himself to the soldiers instead of his guest, wearing the cloak usually worn by Amphibalus. Taken to the temple at Verulamium, he was presented before a judge who demanded that Alban renounce Christianity and offer sacrifices to the gods. Alban promptly refused and was scourged, in the hope that he would recant. When Alban remained steadfast in his beliefs, he was sentenced to death. The town would acquire his name during the Saxon era.

Verulamium contained a forum, basilica and a theatre, much of which was damaged during two fires, one of which occurred in AD 155 and the other around AD 250. One of the few extant Roman inscriptions in Britain is found on the remnants of the forum, it mentions the governor, Julius Agricola, father-in-law of the historian Tacitus. The town was rebuilt in stone rather than timber at least twice over the next 150 years. After the departure of the Romans from Britain, in 410 AD, Roman buildings were maintained for some time. However, the occupation of Verulamium gradually moved away from the Roman town to the nearby site of the martyrdom of St Alban, the site of the current town.

Parts of the Roman city have survived to the present day, including sections of the ancient city walls, constructed in the early third century. The wall was originally 2.3 miles long, around 8 feet thick and 13 feet high and enclosed 81 hectares, strong bastions and towers were erected on the south side of the wall. Only fragments of the wall remain above ground in the present day, but underground portions reveal that the wall was faced with dressed flint, with narrow layers of tiles laid horizontally along the wall at intervals of about 3.3 feet. A large defensive ditch lay in front of the wall. 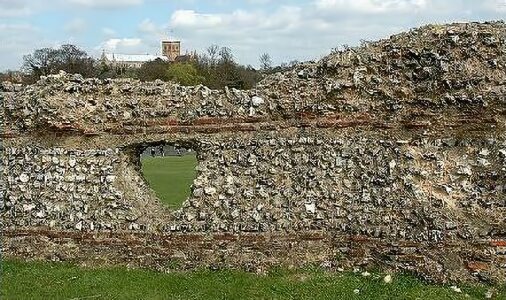 The Roman Theatre of Verulamium is a unique building. Constructed in about 140 AD it is the only example of its kind in Britain, being a theatre with a stage and embanked seating rather than an Amphitheatre.

Initially, the arena would have been used for anything from religious processions and dancing, to wrestling, armed combat and wild beast shows. From about 180 AD the stage came into greater use and the auditorium was extended. By about 300 AD, after some redevelopment work, the theatre had the capacity to seat 2000 spectators. The ruins visible today were unearthed in 1847. Subsequent excavations have revealed a row of shop foundations, a Roman Villa and a secret shrine, all of which are believed to date from the first century.

Verulamium Park boasts the remains of a basilica, bathhouse and new building housing the hypocaust (heated floor) with an intricate mosaic. The Roman walls and the outline of the London Gate are still visible. Excavations were carried out in the park during the 1930s by the archaeologist Sir Mortimer Wheeler, during which the 1800-year-old Hypocaust and it's covering mosaic floor were discovered. More remains exist under the agricultural land nearby which had never been excavated.

Verulamium Museum has reconstructions of Roman rooms, an impressive Roman and Iron Age archaeological collection of national and international significance including, among other treasures, weapons and armour of the period, a suit of Iron Age chain mail buried with the chieftain of the Catuvellauni tribe, a Roman helmet and re-creations of Roman rooms. One of the highlights of the museum is undoubtedly the Mosaic Room, where five spectacular mosaic floors, uncovered between 1930 and 1955, are laid out, the most superb of which is considered to be the Shell Mosaic.