Saint Alban, an early convert to Christianity and the first British Christian martyr, was beheaded at the Roman city of Verulamium.

The main account of Alban's life and Martyrdom is recorded in the Venerable Bede's Ecclesiastical History, although Alban is referred to in many different sources, including Constantius of Lyon in his Life of St Germanus of Auxerre, written about 480. The date of his execution has never been firmly established. The Anglo-Saxon Chronicles lists it as taking place in the year 283, however, Bede states it occurred in 305, "when the cruel Emperors first published their edicts against the Christians". 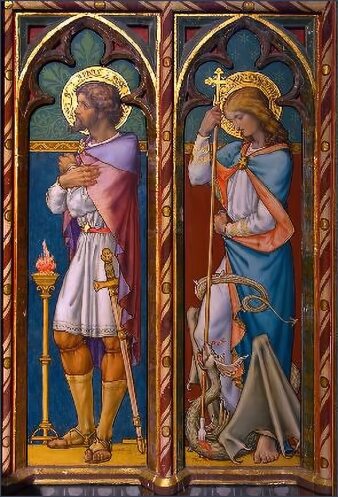 In the year 303, the Emperors Diocletian, Maximian, Galerius and Constantius issued edicts which rescinded the legal rights of Christians in the Empire and demanded that they comply with traditional Roman religious practices. Later edicts targeted the clergy and demanded all Roman subjects to sacrifice to the gods.

Alban, a Romano-British citizen and at that time a pagan, gave refuge in his home to Amphibalus, a Christian priest and a native of Isca (Caerleon), who was sought by Roman soldiers and was fleeing for his life. Alban, a compassionate man, was so impressed with the priest's piety that he decided to convert to Christianity. When the Roman governor of Verulamium was eventually informed of Amphibalus' location, he sent soldier's to Alban's home to arrest him, when Alban offered himself to the soldiers in place of Amphibalus, wearing the cloak usually worn by the priest.

He was taken to the Roman temple at Verulamium and presented before a judge, who promptly demanded that Alban renounce Christianity and offer sacrifices to the gods. Alban is said to have responded, "I worship and adore the true and living God who created all things." He was ordered to be scourged, in the belief that he would soon recant. When Alban remained steadfast in his beliefs, the judge went on to order his execution.

In his account, Bede further elaborates on the story relating that as Alban was being led to his execution, he and his Roman guards approached the River Ver, where they found the bridge crossing over the river so clogged with would-be spectators, that Alban and his Roman guard couldn't pass the river. Alban, who wished to receive a swift death, raised his eyes to heaven, and, we are told by Bede, the river miraculously dried up, allowing Alban and his captors to cross over on dry land:-

"There he saw a multitude of both sexes, and of every age and rank, assembled to attend the blessed confessor and martyr; and these so crowded the bridge, that he could not pass over that evening. Then St. Alban, urged by an ardent desire to accomplish his martyrdom, drew near to the stream, and the channel was dried up, making a way for him to pass over." - Bede

The Shrine of Saint Alban 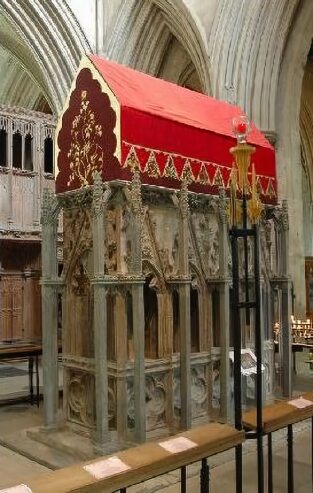 Seeing this, his executioner threw down his sword and fell before Alban's feet, praying that he too might rather suffer with him, or be executed instead of Alban. As they continued to ascend a hill, Alban began to thirst and a spring immediately arose from the ground, providing him with water. A second executioner was brought, and Alban was beheaded, along with the first executioner who refused the task. A further miracle was said to have occured when, after delivering the stroke, the eyes of the second executioner dropped to the ground along with Alban's head.

The priest Amphibalus was eventually captured by the Romans and returned to Verulamium, where he was also beheaded. It was later reported that Amphibalus, with some companions, was stoned to death a few days afterwards at Redbourn, four miles from St. Albans. The name Amphibalus is probably derived from some version of the legend in which a misunderstanding of the Latin word used for the cloak from which Alban created his disguise, Geoffrey of Monmouth, the earliest recorder of the name Amphibalus, also converts the cloak known as amphibious into the name of the martyr.

The site occupied by St Albans Cathedral is the reputed location of Alban's execution. However, the sixth century British historian Gildas in his 'De Excidio et Conquestu Britanniae' places the crossing of the River as at the River Thames and states the martyrdom that occurred at London. Bede is the first author to document the execution and burial of Alban as having taken place in Verulamium.

Christianity was later legalized by Emperor Constantine the Great, after which the site of Alban's execution was soon adopted as the centre for a cult and developed a reputation for miraculous healings. A memorial at the execution site reputed to hold the remains of St. Alban existed at the site from around 300 AD. In 429, Bishop Germanus of Auxerre visited the site, when he is said to have taken the relics of St.Alban. Gildas makes mention of a shrine, and Bede refers to a church. The town would acquire his name during the Saxon era. The Saxon king Offa of Mercia constructed a Benedictine Abbey and monastery at the site in circa 793, which was probably sacked and destroyed by the Vikings in around 890. It was later rebuilt by the Normans.

Nothing now remains of the former shrine of St. Alban, which was adorned by Offa and his son Egfrig. The remains of the later marble shrine of St. Alban, which dates to the fourteenth century occupy a chapel east of the choir and high altar in St. Albans Cathedral, it was destroyed during the reformation, but rediscovered and reconstructed in the nineteenth century, and restored in 1993. In June 2002 a shoulder blade, believed to be a relic of St Alban, was presented to St Albans Cathedral by the Church of St. Pantaleon in Cologne, and placed inside the shrine.