The Battle of Watling Street, one of the bloodiest battles in ancient British history, was fought in the year 60 or 61 AD between an alliance of the British tribes led by Boudica, Queen of the Iceni, who had previously destroyed the Roman towns of Colchester, London and Verulamium (St Albans), and a Roman army led by Gaius Suetonius Paulinus. 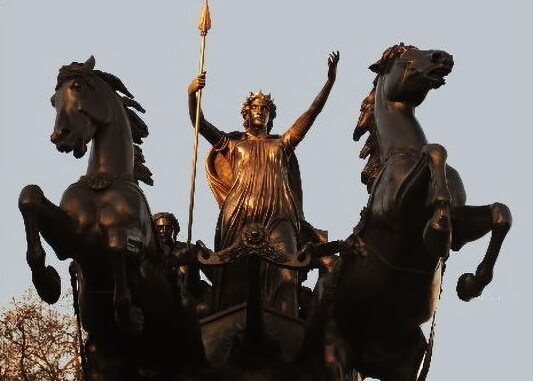 The site of the Battle of Watling Street is unknown, although various sites have been suggested as its location. Most historians favour a site in the Midlands, probably along the Roman road of Watling Street between Londinium and Viroconium (Wroxeter in Shropshire). Other possible sites include Manduessedum (Mancetter), near Atherstone in Warwickshire, a site close to High Cross in Leicestershire, and a small dip at Cuttle Mill, two miles south-east of Lactodorum (Towcester) in Northamptonshire. The Kennet valley, close to Silchester has also been suggested as a plausible site for the battle.

Suetonius' force totalled around 10,000 and included his own Legio XIV Gemina, parts of the XX Valeria Victrix. Although heavily outnumbered, he chose a good position to give battle. The Romans lined up in a narrow gorge with a forest behind them, the gorge opened out into a wide plain on which the Britons amassed. The gorge offered protection for the Roman flanks, and limited the combat frontage of the battle, whilst the forest impeded approach from the rear. The Romans adopted a close formation , with lightly armed auxiliaries on the flanks and cavalry on the wings. Tacitus relates:- 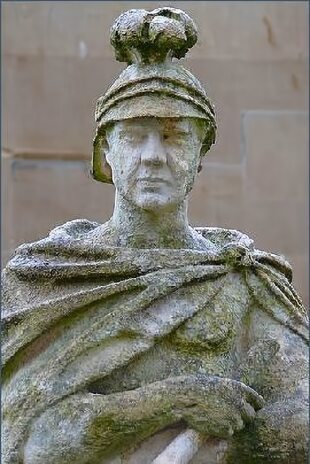 'So Suetonius gathered the 14th legion and detachments of the 20th, together with the nearest available auxiliaries - in all around 10,000 armed men - and prepared to join battle without delay. He chose a position in a defile with a wood behind him. He established there could be no enemy except at his front, where there was an open plain with no fear of ambush. Then he drew up his regular troops in close array, with the light-armed auxiliaries at the flanks and the cavalry massed on the wings. By contrast, unprecedented numbers of British troops and followers paraded wildly everywhere. Their confidence was such that they brought their partners to witness the victory, installing them in carts at the extreme border of the field.'

Although the Britons had mustered a huge force, they were poorly equipped in contrast to the Romans, they placed their wagon train in an arc formation from which point their women and children could watch what they expected to be a great victory. As the two opposing sides prepared for battle, their leaders gave speeches to inspire their soldiers, Boudicca proudly addressed her army from her war chariot. The Roman historian Tacitus, whose father-in-law, the future governor Gnaeus Julius Agricola was on Suetonius's staff at the time, relates Boudica's speech to her followers-: "But now, it is not as a woman descended from noble ancestry, but as one of the people that I am avenging lost freedom, my scourged body, the outraged chastity of my daughters. Roman lust has gone so far that not our very persons, nor even age or virginity, are left unpolluted. But heaven is on the side of a righteous vengeance; a legion which dared to fight has perished; the rest are hiding themselves in their camp, or are thinking anxiously of flight. They will not sustain even the din and the shout of so many thousands, much less our charge and our blows. If you weigh well the strength of the armies, and the causes of the war, you will see that in this battle you must conquer or die. This is a woman's resolve; as for men, they may live and be slaves." 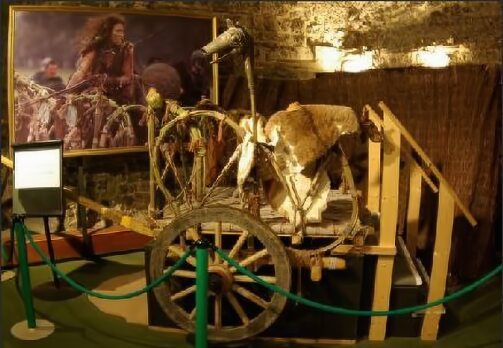 "Disregard the clamours and empty threats of the natives! In their ranks, there are more women than fighting men! Unwarlike, unarmed, when they see the arms and the courage of the conquerors who have driven them to flight so often, they will break immediately. Even when a force contains many legions, few among them win battles - what special glory for your few numbers to win the renown of a whole army! Just keep it in close order. Throw your javelin, and then carry on. Fell them with shield-bosses, kill them with swords. Do not think of plunder. When you have won, you will have everything."

Boudica launched a massive frontal attack on the Romans, but as the Britons advanced, they were channelled into a tightly packed mass. They were met by a hail of Roman javelins. The Romans then pushed forward in small units. With their superior armour, weapons, and discipline, the Romans possessed the advantage in the hand to hand fighting which followed against the tightly packed Britons.

As British losses mounted, they attempted to flee, but their escape was impeded by their arc of wagons and they were slaughtered. The cavalry also attacked the Britons from the flanks as the Roman infantry advanced. The Romans killed not only men but women and children also. 'The remaining Britons fled with difficulty as their line of wagons blocked the escape route. The Romans did not spare even the women. Baggage animals too, transfixed with weapons, added to the heaps of the dead. Tacitus provides an account of the final battle that relates to the women running about frantically, hair wild, naked and screaming. He reports that 80,000 Britons were killed with the loss of only 400 Romans. After losing the battle, Boudica is said by Tacitus to have poisoned herself rather than be captured by the Romans.