Adeliza or Adelicia of Louvain was the daughter of Godfrey I, Count of Louvain, Duke of Lower Lotharingia, Landgrave of Brabant and Count of Louvain and Brussels and his wife Ida of Chiny, a descendant of Emperor Charlemagne.

Known as 'the fair maiden of Brabant', Adeliza was renowned for her beauty, in his 'Historia Anglorum' the chronicler Henry of Huntingdon refers to Adeliza's beauty, "A jewel grows pale on you, a crown does not shine. Put adornment aside, for nature provides your adornment." 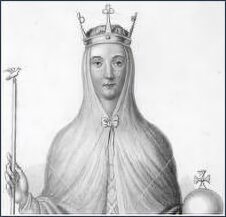 When William the Atheling, the only legitimate son of King Henry I of England drowned in the sinking of the White Ship on 25 November 1120, Henry urgently needed a male heir to succeed to his throne. The fifty-three year old King Henry took the seventeen-year-old Adelicia as his second wife on 24 January 1121. Henry I's first wife, Matilda of Scotland, had died in 1118. Despite the reputation he had acquired for begetting illegitimate children, Henry's marriage to his first queen had produced only two children, William the Atheling and a daughter Matilda, who had been sent to Germany to marry the Holy Roman Emperor as an eight-year old child. After the death of her husband the Emperor, he recalled his daughter, now known as the Empress, to England. Henry named her as his heiress and made the barons swear fealty to her.

Henry of Huntingdon recorded that the new queen accompanied Henry to London at Pentecost. The fifteen year marriage of Adelicia and Henry never produced children. Unlike Henry's first wife Matilda, Adeliza appears to have played a very passive role. While Matilda issued some thirty-one charters and writs during her reign, during Adeliza's fifteen-year marriage to Henry I she issued one, and she only attested 13 of Henry's many charters, even though they were almost always together.

After the death of her husband the king on 1 December 1135, the throne was usurped by his nephew Stephen of Blois. Adeliza retired to the Benedictine convent of Wilton Abbey, near Salisbury. She attended the dedication of Henry's tomb at Reading Abbey on the first anniversary of his death. At about that time, she founded a leper hospital dedicated to Saint Giles at Fugglestone St Peter, Wiltshire. On the first anniversary of Henry I's death, Adeliza give the manor of Aston to the Abbey of Reading, and endowed them with lands "to provide for the convent and other religious pweaona [sic] coming to the abbey on the occasion of the anniversary of my lord King Henry." She also added the gift of a church a few years later.

Henry I, provided generously for his widow, she was given the revenues of Rutland, Shropshire and a large district of London, with possession of the city of Chichester. Henry also gave the manor of Aston to Adeliza "as his queen and wife." Landholdings that were part of Adeliza of Louvain's dower include Waltham in Essex, an estate in south-east England, with areas in Hertfordshire and Bedfordshire, Buckinghamshire, Berkshire, and Middlesex. She had property in Devon. As a gift from Henry I, she was given property in Ashleworth, a component of the royal estate of Berkley. In 1126 the whole county of Shropshire was given to her. 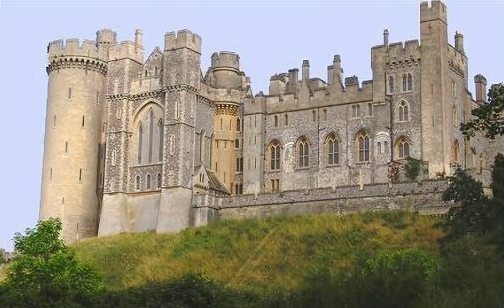 Three years after Henry I's death, in 1138, Adeliza married for a second time to William d'Aubigny, 1st Earl of Arundel, the son of William d'Aubigny and Maud le Bigod. The D'Aubigny's were royal stewards and held an important position at court. The couple lived at Adelicia's castle of Arundel on the Norfolk coast. Although there were no children from her first marriage Adeliza presented her second husband with seven children, Alice, William, Olivia, Reynor, Geoffrey, Henry, and Agatha d' Aubigny. Adeliza and William's descendants include Anne Boleyn and Catherine Howard, the second and fifth queens of Henry VIII. The descendants of Adeliza and William still own Castle Rising and Arundel Castle to the present day.

England was plunged into a bloody Civil War when Matilda, the daughter and appointed heir of Henry I, challenged her cousin Stephen for the throne. Adeliza received her step-daughter at her home in Arundel, along with Matilda's illegitimate half-brother Robert, 1st Earl of Gloucester, the chief supporter of her cause, in defiance of her husband's wishes, William d'Aubigny was a staunch supporter of Stephen.

She later betrayed them both and handed them over to King Stephen, John of Worcester recorded that "she feared the king's majesty and worried that she might lose the great estate she held throughout England." He also mentions Adeliza's attempts to pacify King Stephen, "she swore on oath that his enemies had not come to England on her account but that she had simply given them hospitality as persons of high dignity once close to her."