Robert de Bellême was a Norman noble, the most powerful vassal of the English crown under the Norman kings, William II Rufus and Henry I, and one of the most prominent figures in the competition for the succession to England and Normandy between the sons of William the Conqueror.

He held the titles seigneur de Bellême, seigneur de Montgomery, viscount of the Hiémois, 3rd Earl of Shrewsbury and Count of Ponthieu. Robert was a member of the powerful House of Bellême and became notorious for his alleged cruelty. The chronicler Orderic Vitalis calls him "Grasping and cruel, an implacable persecutor of the Church of God and the poor... unequalled for his iniquity in the whole Christian era.". His contemporary reputation for sadism was extreme.

Robert was the oldest son of Roger of Montgomery, 1st Earl of Shrewsbury, one of king William I's most trusted supporters, and the heiress Mabel de Bellême, daughter of William I Talvas, was born probably between 1052 and 1056. 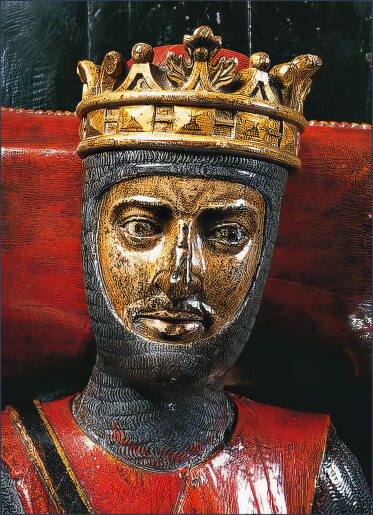 In 1073 when the William the Conqueror invaded Maine, Robert was knighted by the king at the siege of Fresnai castle. He later participated in the 1077 revolt of the young Robert Curthose eldest son of King William. When Robert's mother, Mabel, was murdered in around 1079, Robert inherited her vast estates. However the wary William no longer trusted Robert of Bellême and took the precaution of garrisoning the Bellême castles with troops of his own. On learning the news of the Conqueror's death while campaigning in Normandy in 1087, Robert responded by expelling the ducal garrisons from all his castles.

Robert Curthose, succeeded to his father's dukedom of Normandy, but not England, which was inherited by his father's favourite son, his younger brother William Rufus. At the end of 1087 the new Duke of Normandy was involved in a plot to remove his brother and place himself on the English throne. He received support from Robert de Bellême, his brother Hugh de Montgomery. The main conspirators, however, were the scheming Odo of Bayeux, the half-brother of William the Conqueror, Eustace III, Count of Boulogne, Robert de Mowbray, Geoffrey de Montbray, Earl Roger de Montgomery along with others.

The following year during the Rebellion of 1088, the rebels burned and wasted the king's properties and those of his followers. Roger of Montgomery succeeded in detaching himself from supporting Robert Curthose through negotiations with King William. Robert de Bellême was among the rebels who defended Rochester Castle. When William Rufus blockaded the town the garrison began negotiating for surrender under honourable terms, being allowed to keep their lands and serve the king. This proposal was utterly refused by Rufus, who was furious and had initially wanted the traitors hanged. Roger of Montgomery and others of the barons interceded with the King, Earl Roger on behalf of his sons, until finally in July a semi-honourable surrender was negotiated. Rufus reluctantly spared their lives and granted them safe conduct.

Robert of Bellême returned to Normandy in the company of Count Henry, the fourth son of William the Conqueror, who had not participated in the conspiracy against his brother William. They shared a burning resentment of Odo, Bishop of Bayeux who, having been banished from England, had returned to Normandy ahead of them. Odo, who held great influence over his nephew Duke Robert, convinced him that both Henry and his travel companion Robert de Bellême were now conspiring with William Rufus against him. They were seized as they landed in Normandy, and, both were imprisoned.

Roger de Montgomery immediately travelled to Normandy and put all his castles in a state of defence against duke Robert. Bishop Odo advised his nephew to take all the castles of Robert de Bellême by force at which the duke gathered an army and proceeded against them. Duke Robert first attacked Ballon which surrendered. He then proceeded to the castle of Saint-Céneri where the family of Robert de Bellême was living. Robert Quarrel had received orders from Earl Roger to resist the duke at all costs and this was carried out until the provisions in the castle eventually ran out. Duke Robert, enraged, had Robert Quarrel blinded and mutilated the castle defenders. He then dissolved his forces and returned to Rouen. Earl Roger sent peace envoys to the duke and convinced him to release his son which he finally did. In 1094 earl Roger died. Robert's younger brother Hugh of Montgomery, inherited the English lands and titles, becoming 2nd Earl of Shrewsbury, while Robert succeeded to his father's Norman properties.

In 1096, Duke Robert took up the cross and enthusiastically joined the First Crusade, he inadvisely left the custody of Normandy in the control of William Rufus. Robert of Bellême regained the favour of Rufus and both he and his brothers were in his service on several occasions. 1098 saw the death of Robert's younger brother Hugh, at which Robert inherited the English properties that had been their father's, making him the wealthiest magnate in both England and Normandy.

In August 1100 when Rufus was killed by a stray arrow while hunting in the New Forest, Henry I seized the English throne before his brother Robert Curthose could have a chance to lay claim to it. Duke Robert returned from the First Crusade, he had been encouraged to attack Henry by his barons but remained indecisive until Ranulf Flambard, having escaped from captivity in the Tower of London under Henry I, fled to Normandy where he appears to have influenced Duke Robert to proceed with his invasion of England. Robert de Bellême was one of the great magnates who joined Robert Curthose's 1101 invasion of England. 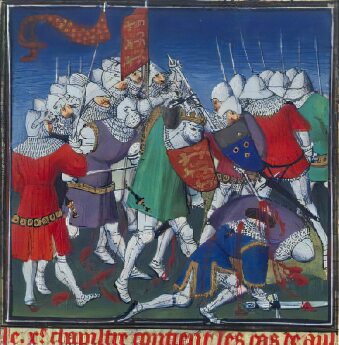 The invasion, which aimed to depose Henry I, ended with the Treaty of Alton which called for amnesty for the participants but allowed traitors to be punished. It quickly became apparent that Henry I had no intentions of abiding by the terms of the treaty; Henry I took a year compiling charges against Robert and his brothers and Robert's unlicensed castle building and specifically Bridgnorth Castle may have been the last straw for the king. Henry had a series of charges drawn up against Robert in 1102, and when Robert refused to answer for them, gathered his forces and besieged and captured Robert's English castles. Robert lost his English lands and titles and was banished from the country.

Robert fought alongside Curthose at the Battle of Tinchebrai, fought on the 28th September 1106 near the town of Tinchebrai on the border of the county of Mortain. He commanded the rear division of the Norman army. When the tide of the battle turned in Henry's favour, he avoided capture by fleeing the battlefield without striking a blow. Normandy was now under Henry's rule and Robert Curthose his captive, He was held in Devizes Castle for twenty years before being moved to Cardiff Castle, where he died in 1134, in his early eighties.

Robert de Bellême submitted and was allowed to retain his Norman fiefs and his office as viscount of the Hiémois. Henry, however, remained wary of Robert and placed his followers in key positions in Normandy. In the rebellion of 1110-12 barons on the frontier of Normandy were dissatisfied with Henry's policies and his attempt to take custody of William Clito, the son of Robert Curthose.

Robert played a central role in this rebellion, In 1112 he was sent as an envoy of the French king to Henry I to negotiate the release of Robert Curthose, whereupon Henry seized Robert and imprisoned him. Henry had charges already prepared; failing to attend Henry at his court after being summoned three times, failing to render accounts, and acting against his lord's interests. With Robert's imprisonment, the rebellion against Henry collapsed. Robert spent the rest of his life as a prisoner; the exact date of his death is unknown. Stories of his brutality were circulated after his death, possibly inspiring the legend of Robert the Devil, a sadistically cruel Norman knight fathered by Satan himself.