Thomas of Woodstock , Duke of Gloucester

Thomas of Woodstock was the fifth surviving son and youngest child of King Edward III and his wife Philippa of Hainaut, daughter of William III, 'the Good' Count of Holland and Hainaut, and Joan of Valois. Thomas was born on 17th January, 1355 at Woodstock Palace in Oxfordshire.

At the age of twenty-one, Thomas was married in 1376 to the heiress Eleanor de Bohun, eldest daughter of Humphrey de Bohun, 7th Earl of Hereford and Joan Fitzalan and acquired the title Earl of Essex and the office of Constable of England from his father-in-law. He was created Earl of Buckingham at the coronation of his young nephew, King Richard II, in July 1377.

Thomas of Woodstock, Duke of Gloucester 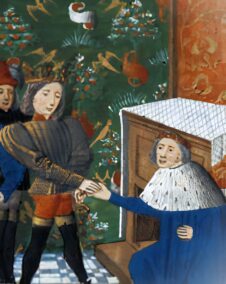 Humphrey de Bohun had died on 16 January 1373, with no son to succeed him, his vast estates were divided between his two surviving daughters, Mary and Eleanor de Bohun, who were left as wards of King Edward III. Eleanor de Bohun's younger sister and co-heiress, Mary de Bohun, married Thomas' nephew, Henry of Bolingbroke, who later took the throne as King Henry IV.

Thomas, who had not not wished to share his wife's substantial Bohun inheritence, encouraged her sister and co-heiress Mary, then still a child, to take the veil and become a nun. However, Thomas' brother, John of Gaunt, Duke of Lancaster, with the aid of Mary's mother, Joan, had the child abducted from a convent to be married to his young son. Relations between Thomas and his brother, John, accordingly were somewhat strained by the event.

The marriage of Thomas of Woodstock and Eleanor de Bohun produced five children:-

During the Breton War of Succession, John V, Duke of Brittany, had received support from England against his rival Charles of Blois, who also claimed the Dukedom and was supported by the French. With the aid of an English army, John of Brittany was victorious but was later forced into exile in England by his enemies the French. He returned to Brittany in 1379, with the support of the Breton barons who feared the annexation of Brittany by France. An English army of 5,000 troops were dispatched to aid him under the command of Thomas of Woodstock.

The murder of Thomas of Woodstock, Duke of Gloucester 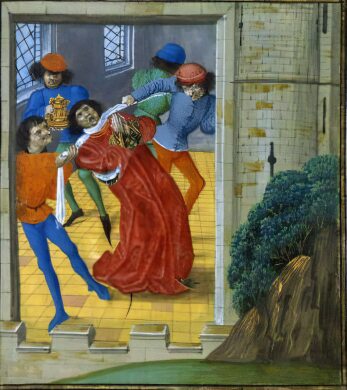 Arriving in Calais in July 1380, Thomas advanced to the east of Paris where he was confronted by the Duke of Burgundy and a French army at Troyes. The French, having learnt from the experience of Crécy and Poitiers, avoided battle with the English and the two opposing armies eventually marched away. Charles V died a few days later throwing the French defensive operations into disarray. Thomas marched west largely unopposed and laid siege to Nantes and its vital bridge over the River Loire towards Aquitaine in November 1380. He found he was unable to form an effective stranglehold and called for reinforcements from England. By January the Duke of Brittany was reconciled to the new French King, Charles VI, and, with dysentery ravaging his army, the disheartened Thomas abandoned the siege and accepted a payment of 50,000 from the Duke of Brittany.

In 1381 while accompanying his nephew the king to Scotland, Richard II created Thomas Duke of Gloucester. However, Thomas remained hostile towards Richard's favourites Michael de la Pole, Earl of Suffolk and Robert de Vere, Earl of Oxford, whose recent elevation to the Duke of Ireland had aroused much ill-feeling. King Richard II, like Edward II before him, was unfortunately reckless in his generosity to favourites. Gloucester was involved in the dismissal and impeachment of Suffolk and sat as a member of the commission appointed in 1386 to reform the government and the royal household.

Richard began proceedings against the commissioners and Gloucester defeated de Vere at Radcot Bridge in Oxfordshire in December 1387. He then returned to London where, as the leader of the "lords appellant" in the "Merciless Parliament," In February 1388, he took revenge on his enemies. The Lords Appellant demanded radical changes in the royal household, the execution of the king's principal supporters and de Vere's estates confiscated. The House of Commons feared the King's attempts to undermine the authority of parliament and he was placed under the control of a council. Their intransigence fueled a smouldering desire for revenge in the unstable Richard.

King Richard regained power in 1389. Gloucester opposed the peace made with France and Richard's second marriage with Isabella, the daughter of King Charles VI of France, and it was rumoured that he was again plotting against his nephew. Richard decided to act first and on 11 of July 1397, Gloucester was arrested at Pleshey Castle in Essex. He was taken to Calais. He confessed to being guilty of treason on 8 September and it is most likely that he was murdered on his nephew's orders on 9 September. When parliament met later that month Gloucester was declared guilty of treason and his estates forfeited to the crown. Thomas was buried in the Chapel of St. Edmund, in Westminster Abbey. An inquiry into his death was held in the first year of the reign of his nephew Henry IV (1399).

The Ancestry of Thomas Duke of Gloucester

Paternal Great-grandmother: JOAN I OF NAVARRE