The Wedding of Prince William and Kate Middleton

Prince William of Wales married his long time girlfriend, Kate Middleton on Friday, 29th April, 2011, amid scenes of national rejoicing. To mark the occasion, the Queen created her grandson Duke of Cambridge, Earl of Strathearn and Baron Carrickfergus. The Cambridge title has long and deep rooted family associations, the Queen's great grandmother, Princess Mary Adelaide of Cambridge, was the daughter of a former Duke of Cambridge, Prince Adolphus, the youngest surviving son of King George III. 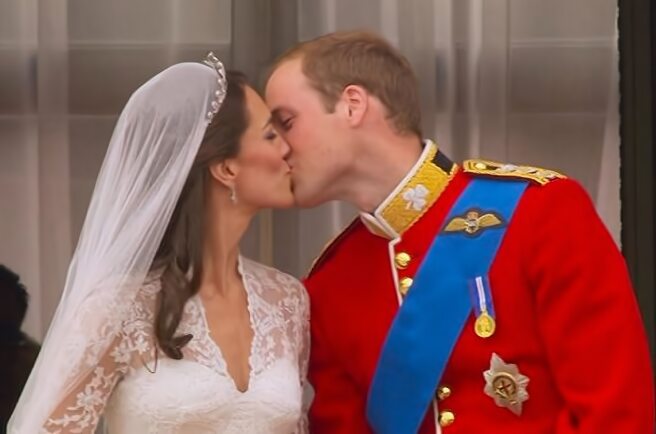 Kate and William share a common ancestor in the fourteenth-century monarch, King Edward III. An additional common ancestor is Sir Thomas Leighton. Sir Thomas married Elizabeth Knollys, the granddaughter of Mary Boleyn and was, therefore, a great-niece to Henry VIII's second queen, Anne Boleyn. The Boleyn sisters' mother was Howard, a member of the family of the Dukes of Norfolk. Her maternal ancestors, the Goldsmiths, had more humble origins and were working-class labourers

The new Duke of Cambridge emerged from Clarence House to exultant cheers from the waiting crowds, accompanied by his brother and best man, Prince Harry. William wore the red uniform of a Colonel of the Irish Guards, along with the star of the Order of the Garter, the oldest emblem of English chivalry, founded by King Edward III in the fourteenth century.

Appearing calm and collected on this most auspicious of days, Prince William happily acknowledged the greetings from the crowds. The best man, Prince Harry wore the black and red uniform of the household cavalry. Making their way slowly through streets lined with throngs of crowds, the pair arrived at Westminster Abbey, one of England's finest Gothic buildings and cradle of royal power since 1066. Westminster Abbey was founded by the Saxon king, Edward the Confessor (1042-65) and consecrated on 28th December 1065. Edward's successor, the Saxon King Harold II became the first King of England to be crowned at the abbey in January 1066. William the Conqueror was also crowned there on Christmas Day, 1066. Every subsequent English monarch, with the exception of Edward V, Edward VIII and Lady Jane Grey has since been crowned at Westminster Abbey.

Around 1,900 people received invitations to the wedding service. They mainly consisted of the couple's relatives and friends along with fifty members of the Royal family, forty members of foreign reigning houses, 200 politicians and diplomats and 80 guests from the Prince William's charities, while an estimated two billion people worldwide were expected to see reports, photos and TV pictures. Colourfully dressed guests arrived at the abbey throughout the morning. Amongst the first to arrive was Chelsey Davy, girlfriend of Prince Harry, who wore a vivid aqua green Alberta Ferretti skirt and an off-the-shoulder jacket. Accompanied by their father, the Duke of York, Princesses Beatrice and Eugenie sported elaborate hats, with Eugenie in a blue suit and her sister Beatrice in taupe. Crown Princess Victoria of Sweden, a distant cousin of Prince Charles, wore a figure-hugging peach wrap dress and a wide-brimmed hat. Mother of the bride Carole Middleton arrived with her son James and wore an elegant, sky blue outfit by Catherine Walker. The Duchess of Cornwall wore a classic champagne coloured dress and coat by Anna Valentine, whilst the Queen opted for a primrose yellow crepe coat dress along with the True Lovers Knot diamond brooch, which once belonged to her grandmother, Queen Mary. She was accompanied by the Duke of Edinburgh, who is now the longest-serving consort in British history. 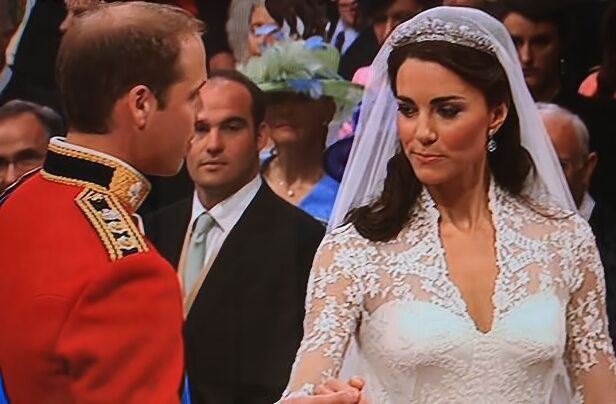 The radiant bride travelled to the abbey in a Rolls Royce Phantom II, giving the crowds the first glimpse of her dress. She was greeted with a surge of applause and cheers. Wearing stylish ivory and white creation designed by Sarah Burton at Alexander McQueen, with intricate chantilly lace, handmade at Hampton Court Palace. With it she wore a delicate silk tulle veil and carried a lily-of-the-valley bouquet, Kate's look was both uncluttered and timeless, she looked every inch the fairytale princess.

Her diamond tiara was a gift from the Queen, It was purchased by the Queen's father, King George VI, for his wife, (later Queen Elizabeth The Queen Mother). The stunning headpiece was presented to the Queen by her mother, on the occasion of her eighteenth birthday. The diamond stylised oak leaf earrings were made by Robinson Pelham and were inspired by the new Middleton family coat of arms, which includes oak leaves and acorns. They were a gift from her parents, Michael and Carole, for her wedding day.

Entering at the abbey's Great West door, Kate processed down the aisle on the arm of her father, Michael Middleton, to the strains of 'I Was Glad' by Sir Charles Hubert Hastings Parry from Psalm 122. As she joined him at the altar, Prince William appeared to say, "You look beautiful". The music at the service had a largely British theme, selected by the couple themselves and blended traditional music with some newly commissioned pieces. Hymns included ‘Guide Me, O Thou Great Redeemer’, ‘Love Divine All Love Excelling’ and ‘Jerusalem’, by Sir Charles Hubert Hastings Parry, words by the poet William Blake. Fantasia on Greensleeves by Ralph Vaughan Williams was amongst the music played before the ceremony began.

The wedding ring, a plain, slim gold band, was made by royal warrant holders Wartski. As is the tradition for royal brides, it was fashioned from a nugget of Welsh gold, given by the Queen. The gold came from the Clogau St David's mine at Bontddu in North Wales.

The Duke and Duchess of Cambridge left Westminster Abbey to waves of cheers from crowds before sharing the traditional balcony kiss. On her marriage, Kate assumes the official title of Her Royal Highness (HRH) Catherine the Duchess of Cambridge. Her wedding bouquet will rest at the Grave of the Unknown Warrior.

The couple later delighted the excited crowds on the Mall with an impromptu drive-in Prince Charles's old blue Aston Martin Volante. The vintage car was decorated with red, white and blue ribbons and had balloons tied to the back. A rear number plate read "JU5T WED", and on the front was an L-plate. A spokesman for St James's Palace commented "It was Prince William's idea to drive his new bride away from the official reception on their first journey as a married couple to his family home."

Prince William and the new Duchess of Cambridge made the decision not to take their honeymoon immediately and have instead have chosen to spend the weekend in the UK, probably at Balmoral, the Queen's Highland retreat. They are expected to later travel to Africa, possibly Kenya where Prince William proposed to Kate.

The Family of Elizabeth II PreviousNext Princess Mary of Teck