Princess Anne, the second child and only daughter of Queen Elizabeth II and Philip, Duke of Edinburgh was born on 15 August 1950, at her parents then London home of Clarence House. She was baptised Anne Elizabeth Alice Louise in the Music Room at Buckingham Palace by the Archbishop of York. Anne was the name originally chosen for Princess Margaret, by her parents, but vetoed by George V, who did not like the name. Alice was chosen for Prince Philip's mother, Princess Alice of Battenberg and Louise was one of the Christian names of the Queen's grandmother, Queen Mary. She was initially known as Princess Anne of Edinburgh.

Princess Anne and her brother Prince Charles as children 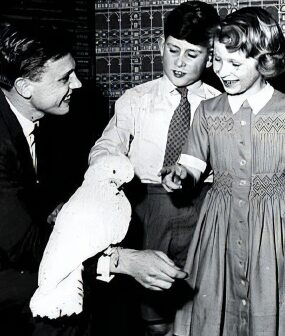 Anne's grandfather, George VI, died in February, 1952 and her mother ascended the throne. Being considered too young at the time, Anne did not attend her mother's coronation. Like her brother Prince Charles before her, Anne began her education privately at Buckingham Palace, but was later sent to Benenden, a boarding school in Kent.

From early on Anne exhibited a keen interest in all things equestrian and is an outstanding horsewoman. At the age of 21 she won an individual title in the European Event Championship at Burghley and in 1971 was voted BBC Sports Personality of the Year. She competed in the 1975 European Event Championships in Germany, where she won a silver medal. Anne also took part in the 1976 Olympic Games, as part of the British team. Noted for her brusque manner, Anne famously told press photographers to "Naff off" when they tried to snap her taking a ducking when she fell from her horse at the Badminton Horse Trials.

On 14 November 1973, Anne married Mark Anthony Peter Phillips, at Westminster Abbey. He was a Lieutenant and later Captain in the Dragoon Guards. Her brother, Prince Charles, was later to refer to him as "Captain Fog" because he regarded him as thick and wet. The couple settled at Gatcombe Park in Gloucestershire, bought by the Queen in 1976 as a wedding present for her daughter. The marriage produced two children, -

Per the wishes of their parents, they received no titles, the first grandchildren of a British monarch never to do so.

Four months after her marriage, an attempt was made to kidnap the princess, while she was returning to Buckingham Palace with her husband. The couple found the road at Pall Mall blocked by another car, forcing their car to halt. Ian Ball, a mentally unstable young man, emerged from the car and fired six shots, wounding several onlookers. He planned to kidnap the Princess and hold her for a large ransom. She is said to have retorted "not bloody likely!" Anne's bodyguard, James Beaton, shot back, injuring Ball, who was chased and arrested. Ian Ball was later committed to a hospital for the mentally ill. Beaton was awarded the George Cross by a highly grateful Queen. 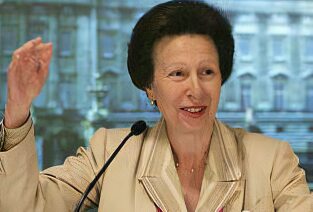 On 13 June 1987, the Queen created Anne Princess Royal, the title traditionally given to the monarch's eldest daughter. Her marriage to Captain Mark Phillips was a strained one and in April 1992, they decided to divorce.

On 12 December 1992, Anne married for the second time, to Commander Timothy James Hamilton Laurence. Since the Church of England, of whom the Queen is head, forbids the remarriage of divorcees, but the Church of Scotland does not Anne married her second husband at Crathie Kirk, by the Queen's Balmoral estate. The marriage made Anne the first British royal since Henry VIII to divorce and re-marry. Commander Laurence has since been promoted to Rear Admiral.

In her youth, Anne came under criticism from the British public for her brusque manner, however recent years have witnessed her becoming one of the most popular members of the royal family. She is certainly one of the most hard-working, carrying out more engagements than any other member of the family, on average more than 500 a year. Anne has been president of the Save the Children charity for the last 30 years and is much more than a figurehead, carrying out much worthwhile work in this field. She is considered the most down-to-earth of the Queen's children.