The Countess of Wessex began life as Miss Sophie Helen Rhys-Jones. She was born at Radcliffe Infirmary, Oxford on 20 January 1965, the daughter of Christopher Bournes Rhys-Jones, a tyre salesman and Mary O'Sullivan, a secretary of Irish descent. She has one brother, David Bournes Rhys-Jones. Sophie is Prince Edward's eleventh cousin once removed through Nicholas and Elizabeth St. John (nee Blount). 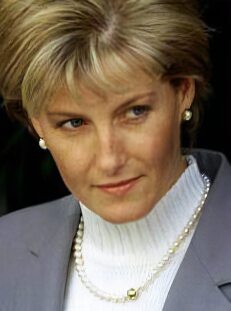 When Sophie was very young, her family moved from Oxford to Kent. She was educated at Dulwich College Preparatory School, Cranbrook, Kent and Kent College School for Girls, Pembury, completing her education at West Kent College.

On leaving school she decided on a career in the field of public relations and worked for several companies, including Capital Radio and Mc Laurin Communications and Media. She formed her own company, RJH Public Relations, in 1996, along with a business partner, Murray Harkin. Sophie's hobbies include skiing, horse riding, sailing and gardening.

Sophie Rhys-Jones met Prince Edward, the Queen's third and youngest son, at a game of real tennis, when she was asked to stand in at the last minute for Sue Barker, who could not keep the appointment. During the ensuing photo session she posed informally leaning on Edward's shoulder. He seems to have not forgotten Sophie, for in a subsequent meeting with Mc Laurin, he politely asked if she would be prepared to meet him again, when he asked her if she would be interested in a game of real tennis and she accepted the

After a long courtship, occasioned by the successive failure of Edward's sibling's marriages and the subsequent damage to the monarchy, Edward and Sophie were married at St. George's Chapel, Windsor on 19 June 1999. Following criticism in the media that her PR company was cashing in on her royal connections, she resigned her position in the partnership. She enjoys a close relationship with her mother-in-law, the Queen. 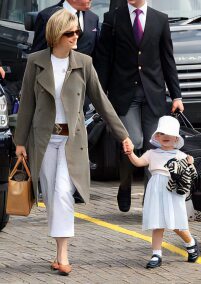 The new Countess of Wessex was admitted to hospital with an ectopic pregnancy, sadly, she lost the baby. She became pregnant again in 2003, but again there were complications, the baby was delivered prematurely by emergency caesarian section, due to a placental abruption, which put both mother and baby at risk, on 8 November 2003 at Frimley Park Hospital in Surrey. The child was a girl, Lady Louise Mountbatten-Windsor. The fair-haired Louise made her first television appearance when she was featured in the Queen's Christmas broadcast of 2004 although both parents prefer to keep their daughter as much out of the public eye as possible.

The Countess supported the Born in Bradford research project in 2006, which carries out research into causes of low birth weight and infant mortality and is particularly involved with charities relating to children, disabilities and communication problems. She is also a trustee of both the Jill Dando Fund and the Haven Trust.

It was announced in July 2007, that the Countess, now 42, is expecting another child, Both Edward and Sophie decided, with the Queen's consent, not to style any of their children HRH, a son would be known as Viscount Severn, while a further daughter will carry the title of Lady. A spokesman said: "She is not putting up her feet. She is going to carry on official engagements as long as she can. She is feeling absolutely great and is completely over the moon about the baby. She loves children and has made no secret of the fact that she wanted more."

Sophie safely gave birth to a son on 17th December 2007 at Frimley Park NHS Hospital near the couples home of Bagshot Park in Surrey, the baby, which was delivered by caesarean section, weighed 6ib 2oz. A spokesman said that the Countess and the Earl of Wessex were "absolutely thrilled" with the new arrival. Buckingham Palace announced in a statement that the Queen, the Duke of Edinburgh and Christopher Rhys-Jones, the Countess's father were "delighted with the news". The baby was named James Alexander Phillip Theo Mountbatten-Windsor.

He will be known by the courtesy title of Viscount Severn. James, Viscount Severn is the Queen's eighth grandchild. The Viscount Severn title is associated with the Rhys-Jones family's Welsh connections. Prince Edward was present at the birth and, speaking afterwards, said that it was "a lot calmer than last time" and added that Sophie was "doing very well". He also commented he was relieved and added that his son was "like most babies, rather small, very cute and very cuddly".