Lady Louise Mountbatten-Windsor is the eldest child of Prince Edward, Earl of Wessex, 3rd son of Queen Elizabeth II and the Duke of Edinburgh and the former Sophie Rhys-Jones, the daughter of Christopher Bournes Rhys-Jones and Mary O'Sullivan. Louise was born a month premature by emergency caesarean section, due to placental abruption on 8th November 2003 at Frimley Park Hospital. She weighed four pounds nine ounces at birth. Her father was not present at the birth as it occurred so suddenly. The baby, the Queen's seventh grandchild, was later transferred to the neo-natal unit at St. George's Hospital, Surrey where she remained until the 23rd November. 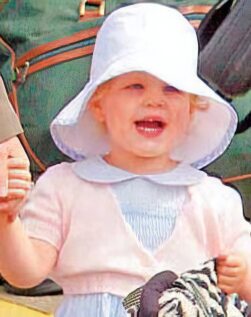 Ninth in the line of succession to the throne, she was christened Louise Alice Elizabeth Mary Mountbatten-Windsor at the private chapel, Windsor Castle in April, 2004. Lady Louise's god-parents were Lady Sarah Chatto, the daughter of Princess Margaret, Lord Ivar Mountbatten, Franceska Shcwarzenbach and Rupert Elliot. Louise was the name of the baby's twice four greats-grandmother, Louise of Hesse-Cassel, Queen Consort of Denmark and of Lord Mountbatten's sister, Louise of Battenberg, who became Queen Consort of Sweden, while Alice was the name of Prince Phillip's mother, Princess Alice of Battenberg. Mary was the name of the Queen's grandmother, Queen Mary of Teck and also that of the Countess of Wessex' mother.

For the occasion, Louise wore the 163-year-old Honiton lace and white satin christening gown which was made for Queen Victoria's eldest daughter, Victoria and is traditionally worn by all members of the royal family.

The surname Mountbatten-Windsor was assumed by the Queen for her descendants in 1960, when it was decreed, via a 1960 Order-in-Council, that those descendants of Queen Elizabeth II and Prince Philip who were not Princes or Princesses of the United Kingdom should hold the surname Mountbatten-Windsor, incorporating Prince Phillip's surname, previously, on the insistence of the Queen's grandmother, Queen Mary of Teck, ( the widow of George V, who established the surname of Windsor for his dynasty) the surname of the Queen and her descendants remained Windsor. 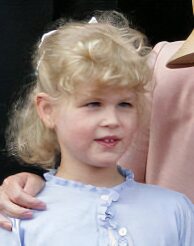 In keeping with the wish of her parents, in an attempt to shield her from media attention, she is known as merely Lady Louise. Letters Patent issued in 1917, which remain in force today bestow a princely status and the style of Royal Highness to all male-line grandchildren of a monarch. Louise is therefore legally Her Royal Highness Princess Louise of Wessex. However, when her parents married, it was announced that following their wishes, their children would not be styled as princes or princesses but rather as the children of an earl.

The fair-haired Louise made her first television appearance when she was featured in the Queen's Christmas broadcast of 2004, but is kept as much as possible out of the public eye by her parents and is rarely seen.

She was born with the condition known as exotropia, which resulted in one of her eyes turning outwards. In January 2006 it was unofficially revealed that Lady Louise had undergone a 30-minute operation under general anaesthetic to correct the problem. The operation was unsuccessful in resolving the problem, and she underwent further treatment in late 2013 that corrected her vision.

Louise was joined by a brother, James, Viscount Severn, who displaces her in the line of succession to the throne, on 17th December 2007. In April 2015 Lady Louise and her brother James participated in their first overseas engagement when they accompanied their parents on a trip to South Africa.