Peter Phillips, the only son of Princess Anne and Captain Mark Phillips was born on 15 November, 1977 at St. Mary's Hospital, Paddington, London . A 41 gun salute was fired from the Tower to welcome the arrival of the Queen's first grandchild.

He was christened Peter Mark Andrew, Peter was the name of his paternal grandfather, while Andrew was the name of Prince Phillip's father, Prince Andrew of Greece and Denmark. In accordance with the wishes of his parents he was not given a title by the Queen. Peter is currently eleventh in the line of succession to the throne.

Peter received his education at Port Regis Co-Educational School in Shaftesbury, Dorset and later at Gordonstoun, the school that his grandfather and maternal uncles had all attended before him. A keen sportsman, he played rugby for the school and won a cap. After leaving Gordonstoun, Peter studied Sports Science at Exeter University. As well as his sister, Zara, Peter has two half-sisters, Stephanie Phillips, his father's daughter by his second marriage and Felicity Tonkin, who was born in 1985 to his father's ex-mistress.

Peter has made frequent appearances on the Buckingham Palace balcony and is a very popular member of the royal family. He attends such family events as the Queen's Golden Jubilee celebrations. He was known to be very supportive of his cousin, Prince William, on the death of his mother Princess Diana. Peter has worked for both Jaguar and the Formula One Racing Team and is currently employed by the Royal Bank of Scotland. In common with both his parents, he enjoys equestrian sports. 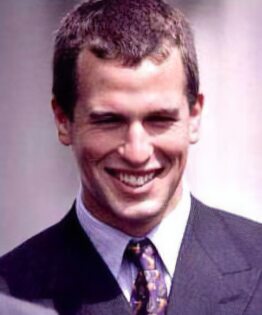 The engagement of Peter Phillips to his long term girlfriend, Autumn Patricia Kelly was announced by Buckingham Palace on 30th July 2007. Autumn, the daughter of Brian Kelly, an electricity company executive and Kitty Magas, a hairdresser, was born in 1978 in Montreal, Canada and currently works as a management consultant. The couple is reported to have met at the Canadian Grand Prix in Montreal in 2003. She is reported to have said that she didn't realise who Peter was until six weeks into their relationship, while he says there was no cause to mention his royal connection. His plans to propose during a hot air balloon flight were ruined by bad weather, and he settled for a proposal while walking the dog in the rain. He reportedly went down on one knee during the downpour. The fact that his fiancee was a Roman Catholic has led to speculation that Peter may have given up his place in the line of succession to the throne, but she has since converted to the Church of England.

Their marriage took place at St. George's Chapel, Windsor Castle on 17th May 2008, making Peter the first of the Queen's grandchildren to marry. The service was conducted by the Right Rev David Conner, Dean of Windsor. The bride wore a dress in ivory duchess satin by the London designer Sassi Holford with a full veil, a tiara which had been loaned to her by her mother-in-law Princess Anne and a necklace and earrings which were a gift from Peter. Peter's sister, Zara was one of the six bridesmaids, while guests included the Queen, the Duke of Edinburgh, Princess Royal, Commander Timothy Lawrence, Mark Phillips, the Prince of Wales, the Duchess of Cornwall and Prince Harry and his girlfriend, Chelsy Davy, who met the Queen for the first time at the wedding. Prince William, who did not attend due to a previous commitment to attend a friend's wedding in Kenya, was represented by his girlfriend, Kate Middleton.

Prior to their wedding, the couple caused some reported unease in royal circles when they were interviewed and photographed by the celebrity magazine, Hello!, for which they are reported to have been paid £500,000. They have two daughters:-