Edward, Duke of Kent was born on 9 October 1935 at 3, Belgrave Square, London and is the eldest son of Prince George, Duke of Kent ( fourth son of George V and Mary of Teck ) and the elegant Princess Marina of Greece (daughter of Prince Nicholas of Greece and Denmark and Grand Duchess Helen Vladimirovna of Russia.) He was christened Edward George Nicholas Patrick Windsor at the Private Chapel at Buckingham Palace. Prince Edward, Duke of Kent 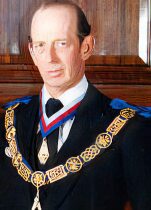 He became Duke of Kent at the young age of six when his father was tragically killed in an aircraft crash in Scotland, leaving Princess Marina a widow with three young children. Prince Edward was educated at Ludgrove Preparatory School in Berkshire and later at Eton College. He completed his education at Sandhurst Royal Military Academy. Following graduation at Sandhurst in 1955 as second Lieutenant in the Royal Scots Greys, the Duke served in the army until his retirement in 1976 with the rank of Lieutenant-Colonel 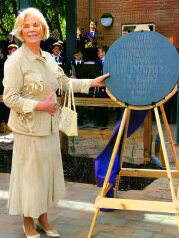 The couple have three children :-

The Duke's mother, Princess Marina of Kent died at Kensington Palace due to a tumour on the brain on 27 August, 1968, at the age of 61 and was buried at the royal burial ground at Frogmore, with her husband, Prince George.

The Duke and Duchess live in an apartment at Kensington Palace, London. The Duke of Kent has carried out many official duties on behalf of his first cousin the Queen, for many years one of his most important duties as the UK's Special Representative for International Trade and Investment, in which role he travelled widely. He is also well known as President of the All England Lawn Tennis and Croquet Club, and presents the winner of the Wimbledon men's tennis tournament with the winning shield.

Katherine, Duchess of Kent converted to Roman Catholicism in 1994, followed by the Kent's younger son, Lord Nicholas Windsor and her grandson, Edward, Baron Downpatrick, both of whom accordingly lost their places in the Line of Succession, as all Catholics are barred from inheriting the throne. In 2002 she made the decision not to use her royal title, preferring to be known as simply Katherine Kent and to reduce the number of her royal engagements. She now works as a music teacher at Hull.