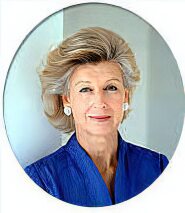 She was christened by Alexandra Helen Elizabeth Olga Christabel. Helen was the name of Princess Marina's mother, Grand Duchess Helen Vladimirovna of Russia and the name Christabel was added to commemorate the fact that she was born on Christmas Day.

Alexandra's father was killed on active service during World War II, in an aeroplane crash in Scotland, while in the course of carrying out a mission to Iceland. Alexandra was brought up by her mother, living at the family home, Coppins in Buckinghamshire, which was left to Prince George in the will of his aunt, Princess Victoria, the daughter of Edward VII and Alexandra of Denmark. Victoria never married or had children of her own.

She was married to the Hon. Angus James Bruce Ogilvy, the second son of the Scottish Earl of Airlee on 24th April, 1963 at Westminster Abbey. They have two children :-

Alexandra's mother, Princess Marina, Dowager Duchess of Kent, died of a brain tumour in 1968 at Kensington Palace, at the age of 61. Angus Ogilvy was knighted by the Queen in 1988. Rifts appeared in the family when her daughter Marina Ogilvy, something of a royal rebel, became pregnant out of wedlock.

Although Marina later married the child's father, Paul Mowatt, relations with her parents continued to deteriorate. They became estranged when Marina talked to the newspapers about their bad relations, claiming that her parents had wanted her to have an abortion rather than the scandal of her pregnancy become public knowledge. A family reconciliation was brought about, but Marina's marriage to Paul Mowatt ended in a very public divorce.

Princess Alexandra, otherwise known as Lady Ogilvy, is one of the most popular members of the royal family and regularly carries out official engagements, representing her first cousin, the Queen and is thirty seconds in the line of succession to the throne. Sir Angus Ogilvy died of throat cancer and pneumonia, aged 76 on 26th December 2004. The funeral was held at historic St. George's Chapel, Windsor Castle on 5 January 2005. He was laid to rest in the Royal Burial Ground at Frogmore, Windsor.