In 1983, a peat digger named Andy Mould was working on the edge of Lindow Moss, a raised mire peat bog on the edge of Wilmslow in Cheshire, some thirty miles east of Liverpool, when he unearthed a female human head. This was followed by the discovery of a leg the next year. After further investigation, a complete head & torso of an Iron Age Man were unearthed, though his body below the waist is still missing apart from his right leg.

Reconstructed face of the Lindon Man 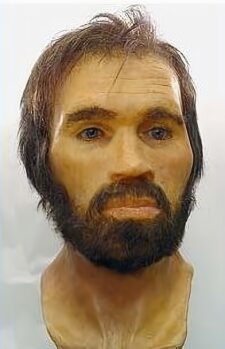 The acidic, oxygen-free conditions in the peat bog meant that the man's skin, hair and many of his internal organs were extremely well preserved. The find has been described as "one of the most significant archaeological discoveries of the 1980s". Investigation revealed that Lindow Man, or 'Pete Marsh' as he is sometimes known, was 25 years old at the time of his violent death, which is estimated to have taken place around A.D. 50 and A.D. 100. His injuries included a v-shaped, cut on the top of his head, measuring 3.5-centimetre (1.4 inches) a possible further cut at the back of the head; ligature marks on the back of his neck where a sinew cord was found; a possible wound on the right side of the neck; a possible stab wound in the upper right chest; a broken neck; and a fractured rib. Xeroradiography revealed the blow on top of the head was the result of being hit with a relatively blunt object; which had fractured the skull and driven fragments into the brain. Swelling along the edges of the wound indicated the victim had lived after being struck and could have survived for several hours afterwards. The ligature marks on the neck were caused by the tightening of the sinew cord found around his neck. In life Lindow man (Lindow II) would have measured five feet seven inches (168 cm) tall and was well built and weighed about 132 pounds (60 kg). A leathery skin with a yellowish hue with visible wrinkles, the face is contorted due to pressure and decalcification of the bones. 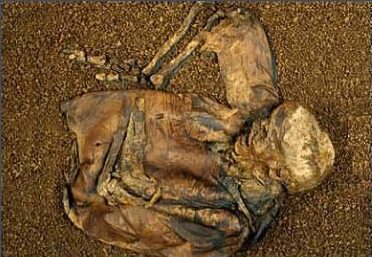 Unusually for a bog body, Lindow Man sported a beard and moustache. He was naked except for a fox-fur armband. His beard had been trimmed a few days prior to his death and his fingernails were manicured, which has led to assumptions that he was probably a person of some wealth and status. In life he would have stood between 5'6" and 5'8" (1.68 and 1.73 m) tall and weighed about 132 pounds (60 kg).

Lindow Man ate a last meal of unleavened bread made from wheat and barley, cooked over a fire on which heather had been burnt. He was found to have suffered from slight osteoarthritis and an infestation of whipworm and maw worm. Evidence of pollen from a mistletoe plant was also discovered in his stomach. If it came from a flower, this would indicate that his death to have took place in March or April.

There are numerous theories to explain Lindow Man's death. Some have argued that he was the victim of a ritual murder and sacrificed to the gods by Druids. When the Romans conqured Britain, they recorded the native Celtic peoples ceremonies and practices which they encountered there, many of which struck them as extremely barbaric. In a festival known as Beltain, which was held annually on 1 May, a victim was sacrificed to ensure the summer's crops. However this practice was outlawed by the Romans. It is also possible that Lindow Man was a scapegoat of his local community who blamed him for the failure of crops, disease or famine. There is a disagreement amongst experts as to whether the killing was murder or done as part of a religious ritual.

The body of Lindow Man is now housed in a climate controlled cabinet at the British Museum, London. The female head (Lindow I) was over 1500 years old, between the ages of 30 and 50 and became known as "Lindow Woman". The discovery of Lindow Man in 1984 revived interest in 'Worsley Man', which had been discovered in August 1958, by workmen digging peat at nearby Chat Moss, Worsley. In 1987 Worsley Man was re-examined. He had a wound behind the right ear, fractures to the top of the skull, and a cut through the vertebra where he had been decapitated. The remains of a garotte were also found around his neck, all of which was suggestive of a ritual killing rather than an accidental death, perhaps related to the Celtic cult of the head. Worsley Man was around 20-30 years old on his death, which radiocarbon dating revealed was during the late Iron Age, some time around 120 AD, identifying him as a Romano-British Celt. Worsley Man is now in the care of the Manchester Museum.

The Brythonic Celtic Language Previous Next The Religion of the Celts