Religion of the Celt

The Celtic religion, druidism, was closely tied to the natural world and they worshipped their gods in sacred places like lakes, rivers, cliffs and bushes. The moon, the sun and the stars were especially important, the Celts thought that there were supernatural forces.

Celtic MythologyThe Iron Age Celts were polytheistic, they had many gods and goddesses who were worshipped through sacrifice to appease them. Some of the more famous are Arawn, Brigid, Cernunnos, Cerridwen, Danu, Herne, Lugh, Rhiannon and Taranis. Some of these, like the Dagda, the all-father, Danu, the mother goddess and Brigid or Brigantia, goddess of light, are of more ancient origin than the Celts themselves and are survivals from the Neolithic cultures of Western Europe. Cernunnos, the horned god of the underworld, is depicted with stag's antlers on the "Pillar of the Boatmen", constructed by Gaulish sailors in around 14 AD it was discovered in 1710 within the foundations of the cathedral of Notre-Dame de Paris, site of ancient Lutetia, the civitas capital of the Celtic Parisii. Depictions of wild boar tending to Cernunnos, have also been discovered at a Neolithic site at Durrington Walls in England. Belatucadros or Belatucadrus, a god of war, was worshipped in northern Britain, particularly in Cumberland and Westmorland and was equated by the Romans with the god Mars. Belatucadros is known from about 28 inscriptions in the vicinity of Hadrian's Wall. The horned Celtic god Cernunnos 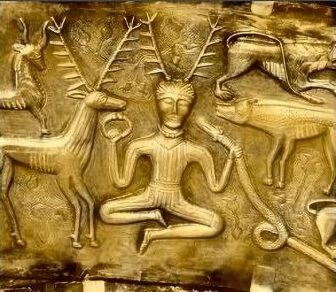 Celtic mythology was based on the earth goddess and fertility religion, which was common throughout the ancient world, merged with an emphasis on the Otherworld, accessible through their priests, the druids, known as derwydd to the Welsh, whose origins stretch into the far reaches of antiquity. The Druids prohibited the written recording of their beliefs, and believed that such knowledge could only be transferred orally. Accordingly our information on their belief system derives from the Greco-Roman writers and conjectures based on late recordings of Irish and Welsh mythology.

The druids believed in the immortality of the soul and believed that the souls of the dead were reincarnated. Caesar stated "The principal point of their doctrine", says Caesar, "is that the soul does not die and that after death it passes from one body into another." At every birth, the Celts mourned the death of a person in the Otherworld who had made the new birth possible. The Roman writer Diodorus thought that Celtic warriors were so courageous in battle because they believed "that the souls of men are immortal, and that after a definite number of years they live a second life when the soul passes into another body" The Druids claimed to foretell the future by meditation, the study of the flight of birds, interpretation of dreams, and by the pattern of sticks thrown to the ground. The Celts sacrificed animals, and sometimes even humans, to their gods. Many Roman writers wrote in horror about the Celtic custom of human sacrifice and classical writers provide harrowing descriptions of "blood-drenched altars" in sacred groves. Bodies have been found in places of spiritual importance such as wetlands, One particularly famous victim may have been Lindow Man, who was discovered in 1984. The Romans outlawed the practice of human sacrifice, but during the revolt of Boudicca, the Iceni performed sacrifices to the Goddess of revenge, Andraste. The Celts also sacrificed weapons to their gods by throwing them into lakes, rivers and bogs. Both Julius Caesar and the geographer Strabo mention the wicker man human sacrifices of the Druids of Gaul, "having devised a colossus of straw and wood, throw into the colossus cattle and wild animals of all sorts and human beings, and then make a burnt-offering of the whole thing"- Strabo. Caesar recorded that some of the Celts built effigies of a man out of sticks and placed living men inside, then set them on fire to pay tribute to the gods. "Others have figures of vast size, the limbs of which formed of osiers they fill with living men, which being set on fire, the men perish enveloped in the flames. They consider that the oblation of such as have been taken in theft, or in robbery, or any other offence, is more acceptable to the immortal gods; but when a supply of that class is wanting, they have recourse to the oblation of even the innocent" - Caesar. The ritual burning of Wicker Men was performed particularly at Beltaine (May) to mark the rite of spring. The main centre of the druids in Britain was the Isle of Anglesey, known as the island of Mona or Ynys Mon, off the coast of North Wales, where they made their final stand at the time of the Roman invasion of Britain.

The Celtic calendar was lunar based and had thirteen months. When required, additional days were added in the new year. The day was seen as commencing after sunset, so the Celtic year began with the arrival of darkness. The decline in the strength of the sun at the end of summer was a source of anxiety for early man and the lighting of the winter fires was an attempt to aid the sun on its journey across the sky as it descended into the realm of the underworld. At Samhain (summer's end), modern 1 November, the Celtic feast of the dead was celebrated, when the barrier between the world of men and the Otherworld was believed to have thinned, allowing contacts between the spirits and humans. Ancestors were honoured and invited home while harmful spirits were warded off. Bonfires were lit and the Celts wore costumes and masks to disguise themselves as harmful spirits as a means of avoiding harm. The festival survives to the present day as All Hallow's Eve or Halloween and the term Samhain is still used in modern Irish to refer to the month of November.

The light half of the year started at Bealtaine (1 May), the halfway point between the spring equinox and the summer solstice, which was a day for dance and song, today Midsummer's Eve. Lughnasadh held on 1 August was seen as the wedding of the Sun god Lugh to the Earth goddess, which caused the ripening of crops. The church transformed this into an offering from the first fruits of the year, the first loaves baked from the new wheat were offered at the Loaf Mass, which became corrupted to Lammas. 2 February was known as Imbolc (lambs' milk) because the lambing season began. It was also called Brigantia for the Celtic female deity of light, due to the Sun's being halfway on its advance from the winter solstice to the spring equinox.