Princess Maud was the youngest daughter and fifth child of King Edward VII, then Prince of Wales, and Alexandra of Denmark, the daughter of King Christian IX of Denmark and Louise of Hesse-Kassel. She was born on 26 November 1869 at Marlborough House, the London residence of the Prince and Princess of Wales.

She was baptised with the names Maud Charlotte Mary Victoria at Marlborough House by John Jackson, Bishop of London, on 24 December 1869. Maud was one of the names of her aunt, Princess Alice, Grand Duchess of Hesse. 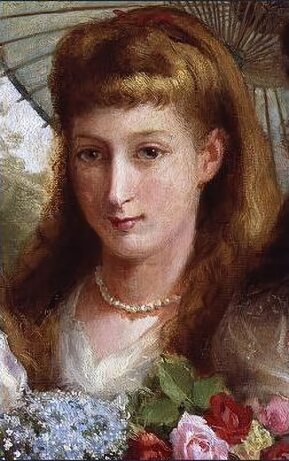 Maud experienced a happy childhood on her parent's Sandringham estate in Norfolk and spent annual holidays with the close knit family of her mother, Alexandra, Princess of Wales in Denmark. She was a shy and reserved child who loved practical jokes.

Princess Maud married her first cousin, Prince Carl of Denmark, whom she first met when attending engagements with the Danish royal family. The couple were married in the private chapel at Buckingham Palace on 22 July 1896. Prince Carl was the second son of Crown Prince Frederick of Denmark, Queen Alexandra's elder brother, and Princess Louise of Sweden. The couple were given Appleton House on the Sandringham Estate by her father Albert Edward, Prince of Wales, to serve as a country residence for their frequent visits to England. The couple's only child, Prince Alexander of Denmark, (Alexander Edward Christian Frederick) was born there on 2 July 1903.

Prince Carl served as an officer in the Danish navy and the family lived mainly in Copenhagen in Denmark until 1905. In June of 1905 the Norwegian parliament dissolved Norway's union with neighbouring Sweden and elected to offer the crown of Norway to Prince Carl. Carl accepted the Norwegian throne, adopting the name of Haakon VII, in honour of previous Norwegian kings, while his son took the name of Crown Prince Olav. The couple arrived in their new country on November 25, 1905, King Haakon VII and Queen Maud were crowned in a ceremony at Nidaros Cathedral in Trondheim on 22 June 1906.

Maud with her husband Haakon VII and son Prince Harald 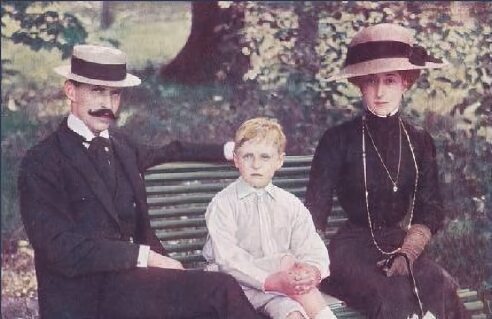 Even after settling in Norway, Maud continued to regard Britain as her real home and visited her family there every year. She had an English garden planted at Kongsseteren, the Royal lodge overlooking the nation's capital of Oslo, to remind her of home. She did, however, bring her son up as a Norwegian and enjoyed the Norwegian winter sports, learning to ski. She made an effort to learn Norwegian, although she found it very difficult and never became fluent in the language.

Queen Maud's last public appearance in Britain was when she attended the Westminster Abbey coronation of her nephew, King George VI and his wife Elizabeth Bowes-Lyon, in May 1937. Following the death of King Haakon in September 1957, Maud's son the Crown Prince of Norway succeeded as King Olav V. He married Princess Märtha of Sweden and had three children, Princess Ragnhild Alexandra, born on 9 June 1930 who married Erling Lorentzen, Princess Astrid Maud Ingeborg, born on 12 February 1932, who married Johan Martin Ferner and Harald V born 21 February 1937 the present King of Norway, who married Sonja Haraldsen.

Maud visited her native England for the last time in October 1938. At first, she stayed at Sandringham but later moved into a hotel in London's West End. She became ill and was admitted to a nursing home, where an abdominal operation was performed on 16 November 1938. Her son King Haakon rushed from Norway to be by her bedside.

Although she survived the surgery, Maud died unexpectedly of heart failure at Appleton House on 20 November 1938, six days before her sixty-ninth birthday and on the thirteenth anniversary of her mother Queen Alexandra's 's death.

Her body was returned to Norway, Queen Maud was buried in the royal mausoleum at Akershus Castle in Oslo.