Princess Mary was born 25 April 1776 at Buckingham House, now Buckingham Palace, she was the fourth daughter of King George III and Charlotte of Mecklenburg-Strelitz. She was christened on 19 May 1776, in the Great Council Chamber at St. James's Palace, by Frederick Cornwallis, The Archbishop of Canterbury. 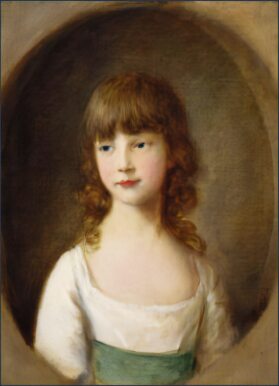 The daughters of George III were educated at home by governesses and teachers under the direction of Lady Charlotte Finch. The Queen, however, ultimately controlled their education and chose all their tutors. The Princesses were taught English, French, German, geography, history, music, art and needlework and their mother procured the famous actress Sarah Siddons to be "reading preceptress" to the princesses, teaching them to read and enunciate correctly.   Mary had an aptitude for music and became skilled at copying drawings in chalk.

Princess Mary was considered to be the most beautiful daughter of George III. She was kind and affectionate and was the Prince of Wales's favourite sister. She danced a minuet for the first time in public at the age of sixteen in June 1791, during a court ball held in honour of the king's birthday. In the spring of 1792, she made her official debut at court. 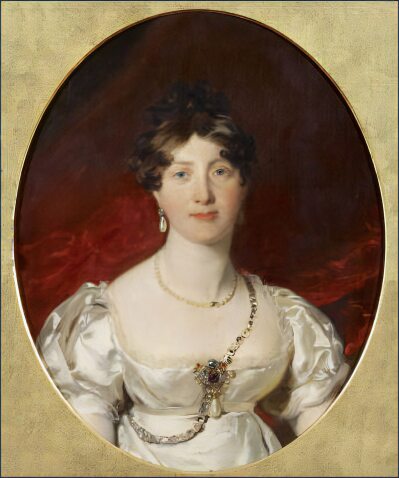 In around 1796, at the age of 20, Mary fell in love with the Dutch Prince Frederick, who, with his family was living in exile in London. Frederik was a son of William V, Prince of Orange, the Dutch stadholder, and younger brother to the future King William I of the Netherlands. However Frederik and Mary never married as George III insisted that her elder sisters should marry first. In 1799 Prince Frederik died of an infection while serving in the army in Italy, and Mary was allowed to go into official mourning for him.

Mary's youngest sister and companion Princess Amelia called her "Mama's tool" due to her obedient nature. Amelia's premature death from tuberculosis on 2nd November 1810, devastated her sister, who had nursed her devotedly during her painful illness and waited on to the last. In common with the rest of her family, she felt the loss deeply.

The King suffered his first bout of madness in 1788, his condition is now thought to be due to the hereditary malady of Porphyria, inherited from the Stuarts. The king further lapsed into insanity in 1801 and 1804, therefore the subject of the marriage for his daughters was delayed. The queen, who found her husband's illness a strain, selfishly wanted her daughters to remain close to her. As a result, as was the case with most of her sisters, Mary was forced to live a secluded existence as a companion to her mother. The princesses rarely came into contact with men other than pages, equerries, or attendants. Constantly chaperoned, they complained bitterly about living in a "Nunnery".

Mary was fond of her eldest brother, George the Prince Regent and shared his dislike of his wife, their paternal cousin Caroline of Brunswick. When Caroline, neglected by her husband, left for Italy, Princess Mary congratulated her brother "on the prospect of a good riddance. Heaven grant that she may not return again and that we may never see more of her." Charlotte, Princess Royal who was married to Prince Frederick of Württemberg at the age of 29, was the only daughter of George III who was able to marry while relatively young. The rest of the princesses were not lacking in suitors, but most of their efforts were prevented by Queen Charlotte. The princesses often pleaded with their eldest brother, George, for help in their situation, Princess Sophia once jokingly wrote to her brother, saying "I wonder you do not vote for putting us in a sack and drowning us in the Thames." 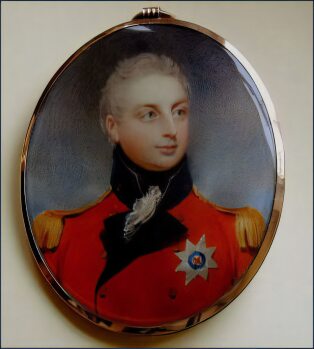 The Prince Regent's attempts to help his sisters resulted in the marriage of Mary to her first cousin, Prince William Frederick, Duke of Gloucester and Edinburgh. The couple, who were both aged 40, were married on 22 July 1816, at the Chapel Royal in St James's Palace. William Frederick the son of George III's brother, Prince William Henry, Duke of Gloucester and Edinburgh and Maria, the illegitimate daughter of Edward Walpole and granddaughter of Robert Walpole, first Prime Minister of Great Britain.

On their wedding day, Mary's brother, the Prince Regent, raised the bridegroom's style from Highness to Royal Highness. From 1811 until his death William Frederick was Chancellor of Cambridge University. He was offered the position of king of Sweden in 1812 by some members of the Swedish nobility, but the British government would not allow him to take the position.

The couple had no children and lived at Bagshot Park, now the home of Queen Elizabeth II’'s youngest child Edward, Earl of Wessex. After William's death on 30 November 1834, she moved to White Lodge in Richmond Park. They had no children together.

Princess Mary was said to be the favourite aunt of her niece, Queen Victoria. Princess Mary was quite close to her eldest brother, and she shared his dislike toward his wife, their cousin Caroline of Brunswick. When the latter left for Italy, Princess Mary congratulated her brother "on the prospect of a good riddance. Heaven grant that she may not return again and that we may never see more of her

After the Duke's death in 1834, Mary lived a retired life, in her last years, her niece Queen Victoria was on the throne as the fourth monarch during Mary's life, after her father and her brothers George IV and William IV . Princess Mary, at 81, was the longest-lived and last survivor of George III's fifteen children; of those fifteen issue, thirteen lived to adulthood. She was also the only one of George III's children to be photographed. She died on 30 April 1857 at Gloucester House, London. On her death, her niece's husband Prince Albert described her as "a lady whose virtues and qualities of the heart had commanded the respect and love of all who knew her".