Princess Amelia was born at the Royal Lodge, Windsor, she was the sixth daughter of King George III and Charlotte of Mecklenburg-Strelitz and the youngest of their fifteen children. Christened at the Chapel Royal, St James's Palace by John Moore, Archbishop of Canterbury, on 17 September 1783, was named after George III's aunt, Princess Amelia, the daughter of George II and was known affectionately by her father the king as "Emily". 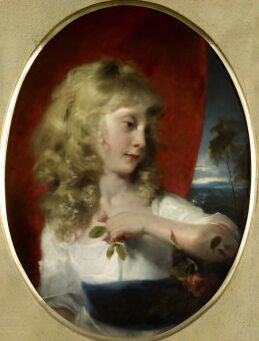 Amelia was born soon after the early deaths of her two elder brothers, the much loved Octavius (23 February 1779 - 3 May 1783) and Alfred (22 September 1780 - 20 August 1782). "Our littlest sister is without exception one of the prettiest children I have ever seen," her oldest sister Charlotte wrote to Prince William when Amelia was only a month old. She was expected to be as beautiful, charming, and winning as Octavius, her father's previous favourite child and when she was young, the King would sit on the carpet playing with her. Uncommon at that age, Sophia's father was involved in her early upbringing and preferred his daughters to his sons. Whenever possible he attended the princesses' birthday parties and other special events and was kept informed on the progress of their education. A family friend once remarked, "I never saw more lovely children, nor a more pleasing sight than the King's fondness for them." Queen Charlotte, however, was widely feared by her daughters. 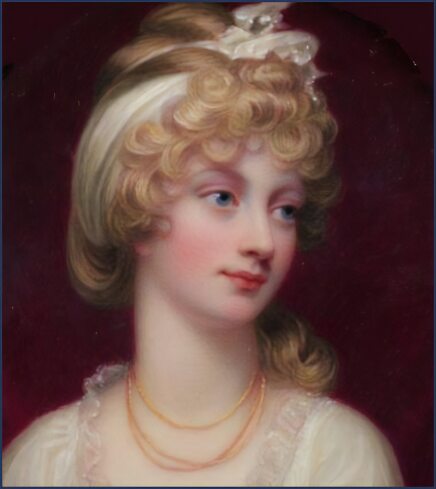 Prior to 1788, King George had informed his daughters that he would take them to Hanover and find them suitable husbands, but remarked, "I cannot deny that I have never wished to see any of them marry: I am happy in their company, and do not in the least want a separation." However, the King suffered his first bout of madness later that year, now believed to be the hereditary malady porpyhria, thought to be inherited from his Stuart ancestors, when Amelia was aged just five.

Further lapses into insanity occurred in 1801 and 1804, which delayed any talk of marriage for his daughters. The Queen, who was under strain due to the king's illness, wanted the princesses to remain close to her. Amelia and her five sisters, Charlotte, Augusta, Elizabeth, Mary and Sophia were isolated, which restricted meeting eligible suitors of their own age.

In 1798, Princess Amelia complained of pain in her knee joint and was sent to the seaside town of Worthing to aid recovery. From there she wrote to her father, "Certainly the vapour and warm sea bath are of use and therefore I hope that I shall be able to assure you that I am better." By the following year, Amelia had recovered enough to join her family at Weymouth, where she doted upon her small niece Princess Charlotte of Wales, only daughter of her eldest brother, George, Prince of Wales, later George IV .

Amelia was a beautiful, slender girl with auburn hair, she was interested in art, music, history and literature as well as being an accomplished horsewoman. Reportedly the "most turbulent and tempestuous of all the Princesses". However, she is also said to have been gentle, unselfish and highly intelligent. These qualities led her sister-in-law Princess Caroline, who was known to despise her in-laws, to call Amelia the "most amiable of the bunch". Amelia was a favourite of both the Prince of Wales and Augustus, Duke of Sussex, who called her a "lovely creature". Amelia adored her eldest brother, George and once told him that she had always loved him better than her other brothers. He for his part loved her perhaps more than he did his other sisters, with the possible exception of Princess Mary. 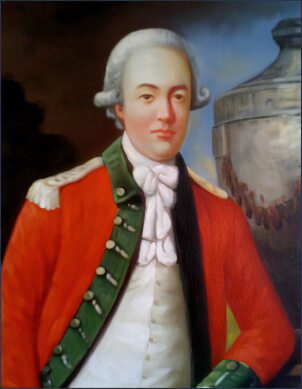 Amelia suffered from poor health throughout her life and at the age of fifteen, she started to display the early symptoms of what would turn out to be tuberculosis. In 1801, she was sent for a seaside cure at Weymouth. Among those staying with her was the Hon. Charles FitzRoy, an equerry some 21 years older than herself, the second son of Charles FitzRoy, 1st Baron Southampton and a descendant of Charles II. Amelia fell in love with Charles and wished to marry him. The Queen was informed of the attachment by a servant but turned a blind eye. It was hoped that this would prevent the King from discovering the liaison, which may have risked a return of mental illness to which he was becoming increasingly prone.

Though she never gave up hope of marrying him, Amelia knew she could not legally marry Charles FitzRoy due to the provisions of the Royal Marriages Act passed by her father's Parliament. She would later confide in her brother Frederick that she considered herself to be married, taking the initials A. F. R. (Amelia FitzRoy). In 1808, Amelia had a severe attack of measles and the depressing atmosphere at home with her mother in Windsor made her even more miserable. The anxious King George decided to send Amelia to Weymouth, accompanied by her sister Princess Mary. Her health was improved only a little, but she found comfort in quietly resting.

In 1809, she could occasionally take short walks in the garden. This improvement proved to be but temporary, however, and in August 1810 her sufferings grew more severe, whilst in October of that year she was seized By eighteen, erysipelas, a painful bacterial skin infection also known as St Anthony's fire. The king summoned his daughter's physicians to him at seven o'clock every morning and three or four other times during the day, questioning them minutely as to her condition. She lingered a few days more, waited upon to the last by her favourite and devoted sister, Mary.

The dying princess had a mourning ring made by the Court jewellers, Rundell, Bridge and Co, for the King, composed of a lock of her hair under crystal set round with diamonds. He purportedly burst into tears upon receiving it. Princess Amelia died on 2 November 1810 at Augusta Lodge, Windsor, her will dictated all her possessions be given to Charles FitzRoy.

King George III was stricken with grief at her death and rapidly descended into a period of derangement from which he never recovered. George, Prince of Wales, was devastated when she died. So deeply affected was he by her death that after her funeral, he could never again sleep in a room that was not lit by several wax candles. He also burst into tears at the mention of her name more than three years after her death. Amelia was buried in the royal vault in St George's Chapel, Windsor.