The Battle of Ashdown

The Battle of Ashdown was fought on 8 January 871. The 21-year-old Prince Alfred (later Alfred the Great, led the Saxon army of his elder brother, Ethelred of Wessex to victory in battle against an invading force of Vikings. The Saxon army, which consisted of around 800 to 1000 men, held a small advantage in numbers, but the Vikings held high ground.

By 870, the Vikings under Halfdan Ragnarsson spurred on by their success in Northumbria, prepared to attack the southern kingdom of Wessex. The Saxons of Wessex retreated to the Berkshire Downs to reassemble their forces. 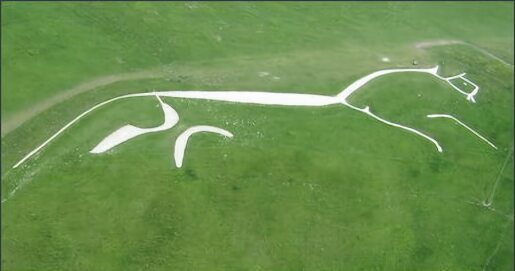 Alfred hastily mustered troops to defend the kingdom from the invaders. He is said to have ridden up onto Blowingstone Hill, near Kingston Lisle, to an ancient perforated sarsen stone, known as the 'Blowing Stone'. The stone produced a booming sound when the air was blown through one of its holes. Alfred blew hard and a great boom was heard across the Downs. The Saxons soon gathered to his signal to defend their homes from the marauding Vikings.

Ethelred and Alfred marched their army to block the ancient road across the Berkshire downs at a spot known to the Saxons as Nachededorne or the naked thorn. The precise location of the battle is not known with certainty. Thorn Down at Compton, near East Ilsley which means 'Place of Conflict' is one of many contenders. Investigation in modern times suggests a site on the Ridgeway between Aldworth and the Astons.

The Anglo-Saxon Chronicle, our chief source of information on the period, refers to the spot as Ashdown. Alfred's forces gathered at the fort now called Alfred's Castle near Ashdown House at Ashbury. King Ethelred's troops took up position nearby, at Hardwell Camp, near Compton Beauchamp. The Vikings, led by Bagsecg and Halfdan Ragnarsson, arrived at Uffington Castle, where they set up camp.

On the morning of 8 January 871, the two opposing armies faced each other at a site where a lone gnarled thorn tree stood, though initially, neither appeared eager to open the battle. 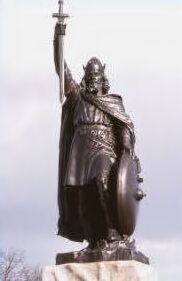 The pious King Ethelred wished to spend this lull before the battle in prayer and went to the church at Aston intending to return when battle commenced. Alfred grew impatient with his brother, but despite his insistence, Ethelred would not return until the priest had finished the service. The Vikings had already formed battle lines in an advantageous position, on the higher ground and Alfred, impatient and eager to engage the enemy, gave the signal for his men to attack.

In a bitter and bloody pitched battle that lasted until nightfall, with great carnage on each side, the Viking leader King Bagsecg and the five Danish Earls perished on the battlefield. The Vikings were pursued eastward by the victorious Saxons, across Berkshire. Many hundreds of bodies covered the chalky slopes of the Berkshire Downs.

Alfred's victory, however, was to prove short-lived, his victory brought no permanent advantage and the conflict continued, but two weeks later the Viking invaders descended again, skirmishing continued and an inconclusive battle was fought at Basing. Ethelred, supported loyally by his brother Alfred, refused to surrender. The raven banner of the Vikings and the dragon of Wessex were hoisted again at Meredune, which is believed to have been either Marden, near Devizes or Martin in Hampshire. In the furious conflict that ensued, the Danes emerged the victors and Ethelred met his death, whether in battle or as a result of wounds suffered in battle is unclear. He is reported to have died on 15 April 871 and Alfred succeeded his brother as king.

For many centuries it was thought that the 325 feet long White Horse was cut in the hillside to commemorate Ethelred's great victory, but it is now known to be much older.