Malcolm II , known as 'Forranach' meaning the destoyer, taking advantage of the fact that the English were preoccupied with Viking raids, marched south with Owain the Bald, King of Strathclyde in 1018 or possibly 1016, and together they burnt much of Northumbria. 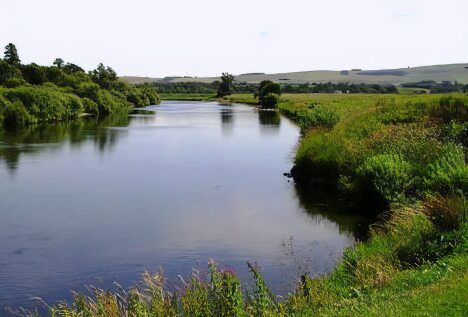 The area of Lothian, the south-east of Scotland between the Tweed and the Forth, had formed part of the Angle kingdom of Northumbria from the mid-seventh century until 867, when the Vikings had conquered York and established the kingdom of Jorvik. By the early ninth century, the lords of Bamburgh in northern Northumbria maintained a semi-independence, however, they were unable to resist pressure from the north where the kings of the Scots pursued their territorial ambitions southwards. By 962 the Scots had taken Edinburgh and much of Lothian. With the loss of Lothian, the lords of Bamburgh were keen to retain the southern half of their domain, with the Scots equally keen to extend their territories southwards.

Malcolm was met by a local force led by Uhtred the Bold, Earl of Northumbria, the son of Waltheof I, ealdorman of Bamburgh, at Carham on Tweed. Uhtred had previously heavily defeated Malcolm at Durham in 1006, but Northumbria had been substantially weakened over the years by its neighbours.

Symeon of Durham, in his 'Historia Ecclesiae Dunelmensis' (History of the Church of Durham), recorded-

"In the year of our Lord's incarnation ten hundred and eighteen, while Cnut ruled the kingdom of the Angles, a comet appeared for thirty nights to the people of Northumbria, a terrible presage of the calamity by which that province was about to be desolated. For, shortly afterwards, nearly the whole population, from the river Tees to the Tweed, and their borders, were cut off in a conflict in which they were engaged with a countless multitude of Scots at Carrum."

The location of the Battle of Carham, (sometimes referred to as the Battle of Coldstream) is traditionally placed to the south of River Tweed between Wark and Cornhill rather than at Carham itself. No details regarding the actual battle itself appear to have survived but the battle was a victory for Malcolm II and Owain of Strathclyde and Uchtred of Northumbria, who was slain in combat. So devastating was the defeat that it was reported the Aldhun, the Bishop of Durham, died heartbroken on receipt of the news. Malcolm's victory established the River Tweed as the Anglo-Scottish border, before the battle, the boundaries had extended towards Edinburgh and the Lothians.

It is traditionally thought that the victory significantly increased Scotland's hold on Lothian; however, some historians argue that Lothian had been granted to Kenneth II of Scotland by the English king Edgar the Peaceful in 973, and that the battle led to no significant change to the control of Lothian.